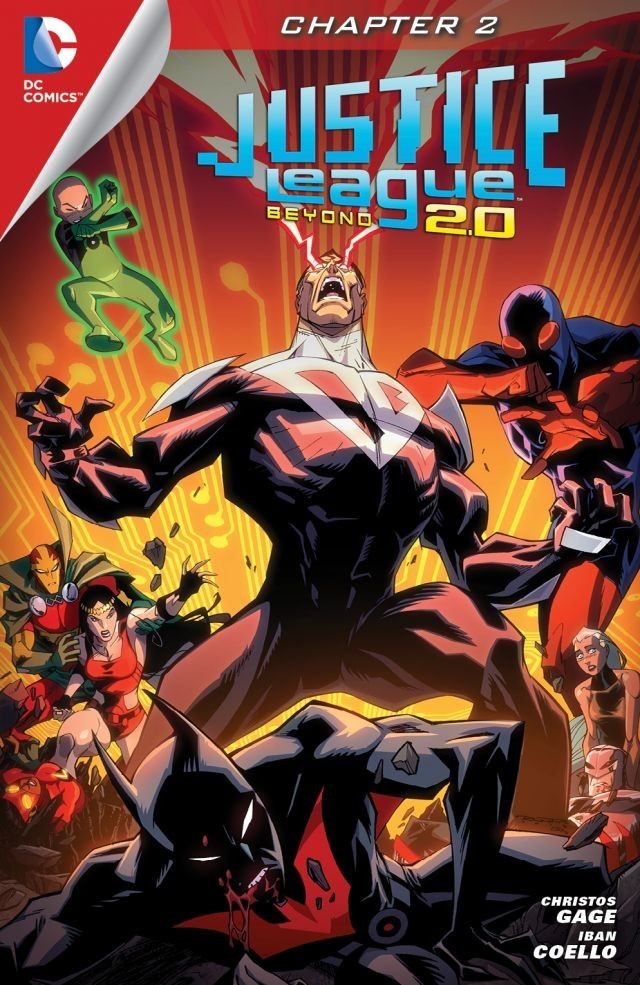 Click to enlarge
The Justice League Beyond (JLB) has gathered in the med-bay to view Aquagirl, who was seared by heat vision last issue. Warhawk throws Superman against a wall, angered by his part in Aquagirl's accident. Superman resolves to remove himself from others, and asks Captain Marvel to take his place. Superman retreats to the Fortress of Solitude, where he reminisces about a past occurrence with Lois Lane, and is reminded that he cannot fully withdraw from the world and continue to understand it. Superman enlists Micron's assistance to block his powers using Kryptonian technology, and decides to continue his life as Kal Kent, firefighter. While on the job, Kal Kent and his colleague Rita, enter a burning building to check for possible homeless that may be there. Kal rescues a cat, but the building then implodes with he and Rita trapped inside.

Story - 4: Solid second issue. The rating would have been higher, but, frankly, the issue is too short, even though Gage's economy of script and Coello's panels are accomplishing a great deal for a 22 page, digital comic. It seems that a lot of the alternative comics have a better handle on Superman than his canonical books these days, and while the focus on Superman in a team book shouldn't last past this storyline, it's a smart move to gain reader interest before the solo-shots for Aquagirl and so on.

Warhawk's actions make him seem a solid ass, but with all things considered, and with "War" in his name, it was too little to disturb an enjoyable read. The flashback with Lois was telling and not only for the discussion, but for the fact that Clark has a head full of dark hair, no distinguished grey fade. It's makes one wonder if his signs of age are cosmetic; a way of staying in touch with the world around him and keeping his mind level as he ages, but does not age. The Lois Lane tribute room was interesting for the apparel there: her outfit from "Superman: The Animated Series", but also her Superwoman costume from All Star Superman. It's enough to raise the question of how much of this universe has bleeds from popular aspects from others. Rita hitting on Superman was charming; it's nice to know that he's still got it and with a red-head no less.

The biggest moment for me was when he decides not to retreat from the world. Whenever he makes that decision, nothing good ever comes from it. It's good to see him reflect and allow us into his decision-making process, to see how he makes the right decision, even if it does look like it may have gotten him killed.

Art - 4: Coello's rendering of Superman in costume looks very good, but that may be because of the slight difference that he's applying from what was seen in Superman Beyond.

Cover Art - 3: If covers are thematic, what is this cover alerting us to? More on that next issue.