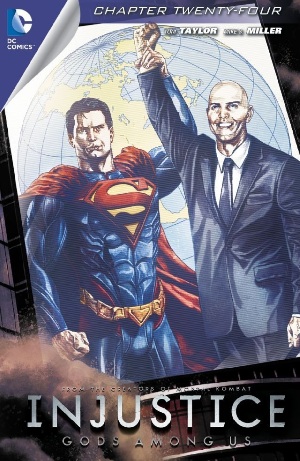 Injustice: Gods Among Us - Chapter #24

"Injustice: Gods Among Us" - Chapter Twenty Four: "One Man Army"

Click to enlarge
Apokolips has invaded Earth under Kalibak's command, and while Superman has defeated Kalibak, the invasion pushes onward in cities like Moscow, Shanghai, and Gotham. The forces are too great for the League, and it looks like a job for Superman. Superman continues to beat on Kalibak, who has conveniently yielded. Kalibak is surprised at Superman's rage, and even though he alerts Superman to the fact that he is immortal, Kalibak is a New God, the thrashing continues. The scene cuts to the Flash about to save a woman in Mumbai, but Superman interrupts his at super-speed, and they have a light speed conversation. Superman asks the Flash if he knows of any other way, aside of killing the parademons, that they can save the lives of the people at risk. "No" is the Flash's response. Superman takes to a sub-orbital position, then returns to Earth and literally incinerates every parademon on Earth. Superman returns to Lex Luthor, who lifts his bloodied fist, as the people shout "Superman! Superman! Superman!"

Story - 4: It's amazing what Taylor has set-up in Injustice: Gods Among Us. This is a cautionary tale of absolute power absolutely corrupting the most incorruptible man on the planet, due to standard superhero trauma. We have to wonder what would have happened if Lois had been murdered before Clark became Superman, and what the outcome would have been then. Nonetheless, this is the scenario we've been given, a faux-tragedy centered on whether or not superheroes should kill... for a video game that specializes in fatalities. The idea of a hero is, traditionally, the individual who can rise to the occasion, where others cannot. It's not that they don't want to, it's that they don't possess the qualities of the hero in terms of courage, temperance, charity, etc. However, heroes are still within our realm of possibility. We can solve the problems of crime, poverty, war, and the lot, once we get around to it, of course. Superheroes are different. Superheroes are supposed to be able to surpass our limitations, hence them being superheroes. If our limits are theirs as well, what good are they?

I've been really hard on Taylor's writing, and he deserves it for lackluster writing, but this issue, while no more stellar than the rest, inadvertently poses questions that make up for its shortcomings. In this world that Taylor's created, there is no clever option. There is no way out of the no-win situation, and therefore, it seems apropos that killing is acceptable. However, the contrivance is that there was another option until Lois Lane's death. There was a way to do the impossible, until that moment that pushes Superman over the edge. Now, almost in the same manner that Superman returning from death at Doomsday's hands resurrected other heroes, incidentally, his act of murder has made it so that killing is a necessity, even for a superhero... even for Superman. In the aftermath of the battle, as people stand in what can only be the ash of what was once living things, the people cheer Superman on as if to say, "Protect us! Save us! Kill for us! But don't control us." The request is a no-win situation, and on this world, we know what happens with no-winners. On a last note, Batman says, "No," when he sees the incredible display of power that Superman unleashes and its results. Does the Batman know a way out of the situation? A way to untie the Gordian Knot without cutting it? Or is he just being unrealistic? ;)

Art - 3: I prefer Derenick to Miller's artwork, which makes Superman look like a crazed cadaver and the Flash an anthropomorphic crab, but what better way to render a dealer of death and someone reluctant to come out of their shell?