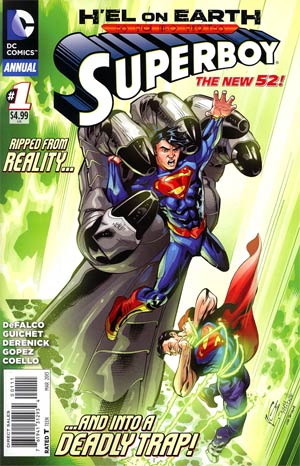 Superboy and Superman appear in a pocket dimension where their bodies twist and stretch like taffy, 'Dali World' as Kon describes it.

They have been sent to this place by Space Pirate Garso's prison teleporter but unbeknownst to the two arrivals two unseen villains are monitoring them and decide to activate a warp portal to send Kon and Kal into another dimension.

Back on Earth, in the Fortress, Cyborg tries to establish a link with Garso's machine but it protects itself by knocking him away, luckily not reactivating. Elsewhere Kara and H'el are assembling the Star Chamber to begin their plan. Kara is still being subtly manipulated by H'el even though she doesn't see it.

Dimension hopping with Kon and Kal drops them onto an alien farmland, they are physically normal but they soon discover that their powers are severely reduced. Superman's vision powers can barely activate the telescopic range.

Superboy is shocked at Superman's cool head, especially as they are being kept out of the assault on the Fortress with seemingly no way back. The Man of Steel is surprised too when his power of flight is proven to be hindered and the duo have to resort to bounding towards the alien farmhouses in the distance. While Superman confides in Kon that he lived in a small town in a farmhouse similar to this place, during the journey Superboy reveals his parallels in the maturation process where he too was brought up in a small town - at least in the simulations of virtual reality.

The soil beneath them erupts and forms two fists that halt them and try to crush them. Superboy touching the ground, uses his TTK in telepathic form and reaches out to something that is desperately trying to contact him. Superman leads the fight as the soil reforms again and again into bizarre soil men that give chase. Superboy is overwhelmed by emotions of pain, frustration and a desperation to live, he comments that these monsters can't truly be alive. Superman advises his young clone that life comes in a variety of forms. The beasts try and halt the heroes but even with their differing methods - Superman's midwestern values, and stepping up to action, as an opposite to Superboy's sarcasm and more 'hands on' approach - they are able to arrive at the farmhouse structure.

Superman's brute strength has no effect but Superboy's TTK is able to make contact with something inside the structure. The unseen villains activate yet another warp zone and Kon and Kal fall into a valley of skeletons and debris. Superman notes that this place has the same buffer to their powers and is almost like a realignment of space around them rather than them being teleported to a new location. Superboy makes an observation too, the last place they were in reminded Kal of his past and this place is like a premonition of the future Harvest had planned for Superboy. Superman quizzes Kon about Harvest, how he was able to collect Superman's DNA and what he was made as a weapon to fight against. Superboy keeps those secrets to himself and is aided by another development and the skeletons begin to come to life and form into monstrous dragon-like foes.

Superman fights the monsters as hard as he can but they keep reforming. He tells Kon that Harvest may have intended him to be a weapon but he has proven himself a potential hero not only by standing up to H'el but by attempting a rescue of Superman himself. Superboy brushes off the praise, but as he is knocked to the floor he feels the TTK rush again and makes contact with that faint emotion. It begins to communicate back and Superboy offers help if it helps them in return. We can't hear the conversation but the explosive force that sends the skeletons into orbit is evident. Superman is even impressed with the feat and uses what little super breath he has to aid the skeletons journey into space. The prison Kon and Kal are trapped in is a living, sentient being, a weapon forced to do the bidding of two villains trapped with it. Superboy had sensed their parallels and that had helped them defeat their armies of monsters and skeletons. The two villains, still watching teleport the heroes again for yet another destination.

Back in the Fortress H'el has detected that both Superman and Superboy are gone. He assumes they have fled as he scans a thousand mile radius and detects nothing. Supergirl smiles that perhaps Superman has come around to their way of thinking and places another part of their machine together. In the pocket dimension Superman and Superboy have appeared in a red themed zoned, rocks, soil and sky. The two villains appear to them and ask to join forces with their fellow 'prisoners' and for Superboy to aid them with his TTK. Superboy snubs them and Superman backs him up revealing that he now knows that they, Blastor and Lasara are actually in league with Garso. Blastor is in fact Garso's older more deadly brother!

The four begin fighting, bantering back and forth ultimately finding themselves an equal match. Superboy however uses his link with the prison to turn the tide. The prison is fearful of freedom free of her captors but with Superboy's soothing influence she ultimately agrees to open a portal for the villains. Superman begs Superboy not to open a portal to help Blastor and Lasara to freedom but Superboy continues and the Prison opens a one way portal just for them. As they vanish Superman is more than angry that Superboy has unleashed such a vicious foe on the universe, but Superboy smiles that he and the Prison had deliberately teleported them to an uninhabited galaxy near the edge of the universe. In case they were betrayed they had built a self destruct mechanism - almost like a check chain on the Prison to kill her if she betrayed them but thanks to Superboy the Prison was completely safe. The Prison sends them home and hints to Superboy psionically that she is severing her ties to our universe to ensure her safety.

Kon and Kal arrive in the Fortress and ask Batman, Cyborg and Wonder Woman how long they were gone for. Cyborg tells them it was just two minutes thirteen seconds, though relieved to be back Superman points out that two minute delay may have given H'el the opportunity to complete his machine and unfortunately he is right!

Story - 4: Not a spectacular story but as character building goes it was pure brilliance. The similarities and differences between Kon and Kal were played out with some well scripted moments. This was a long overdue bonding issue that really struck some chords and was a really enjoyable romp to read. Here is hoping Supergirl and Kon, and Supergirl and Superman also have an issue like this to build on their deeper personalities and go beyond power levels and excessive fist fights. There weren't many revelations in terms of the solicits DC issued but overall I was pretty pleased with the whole Annual. Even the H'el sequences played out well conveying a sense of urgency.

Art - 4: Normally art flipping is something that makes my head explode. I categorically HATE when the art chops and changes all over the place in the same book. This Annual actually does a similar thing to World's Finest right now using the story to dictate when the art changes so it's relevant rather than just a flippant change. The dimension hopping was a nice unique twist to explain it away.

Cover Art - 3: It can't all be compliments and this cover was the downside. With such story potential it seems like this image was poorly thought out and equally rushed in execution. What about the psionic backlash scene? As a cover THAT would have looked spectacular!