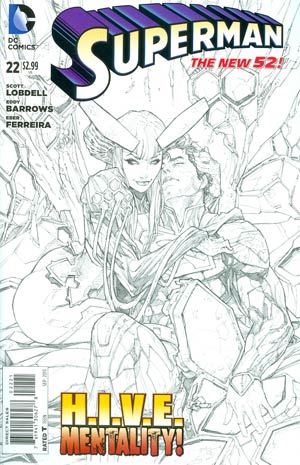 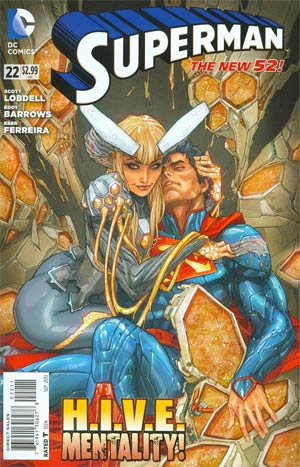 Click to enlarge
Hector Hammond, having arrived at The Holistic Integration for Viral Equality (aka H.I.V.E) is faced with an army of gun barrels. He requests the Queen withdraw the weapons or he'll reconsider helping her. The Queen laughs when she realizes Hammond believes she and H.I.V.E seek a partnership.

The two mentally charged villains face off when neither backs down. Hammond supercharged by the electrical shock that woke him from his coma incapacitates the guards and grabs the Queen by her throat.

Elsewhere, atop a building, Clark is doing the moody, broody thing. He thinks over the events of the last few weeks and realizes that whatever is happening is psionic in nature, something a physical orientated hero like him is practically powerless against... In his own words "what is a Superman to do?"

Flying to street level he changes from armor to street clothes and is still lost in thought. He meets Cat Grant and while chatting to his new partner he notices that her expensive cup of coffee is an empty cup of coffee and that Cat's toiletries and shampoo have dramatically lowered in quality. He realizes his mocking of ClarkCatropolis is something Cat has sunk everything she had into. Having a change of heart he tries to gloss over Hector Hammond but still investigate S.T.A.R by offering up a false source that might lead him to 'The Twenty' an urban legend of young people with meta powers. A story this big, proving The Twenty to be real, would put their news blog on the map and Cat is very grateful that Clark is finally being serious about the venture.

Back in H.I.V.E Hammond smirks at the unconscious body of the Queen but his victory is short lived as laser cannon defenses active and completely obliterate his body... Only for him to awaken seconds later unharmed. Hammond then realizes that he underestimated the Queen's power level. She was obviously able to manipulate him long enough to escape. She may have escaped but she left the entire base at Hammond's disposal.

The Queen has gotten a mile away into the sewer system now and she sends out a mental message to her "father" swearing to correct her mistakes and prepare for his return. At that same moment re-armored, Superman makes his way to see Jimmy Olsen in the Metropolis Grand Hotel. Jimmy has a swimming pool in his penthouse room, three butlers and a maid. Superman is worried about his friend and his extravagant purchases following the death of his parents.

Jimmy is puzzled, he tells Superman his parents are missing, not dead. As the only reachable relative Jimmy controls the family finances until they return. Superman ponders the comments and shrugs it off as a slip of the tongue. Jimmy's parents were always reclusive so it's not a stretch that they might be missing.

An earthquake interrupts them and Superman soars down to investigate. Jimmy offers to photograph the event for PGN but Clark can't wait and is shocked to discover the devastation is being caused by metallic tentacles erupting from the sidewalks and buildings. He realizes too late that they are Brainiac tech and is suddenly attacked by a mental blast.

The attack incapacitates Clark and sends him directly into the ground. The H.I.V.E Queen drags his body and embraces it explaining that her 'father' Brainiac should never have left The Twenty behind. They have become super powerful and the Queen has a plan to protect the people in a way the now comatose Superman could never hope to.

Brainiac is coming and she wants everyone ready to welcome him.

At that moment, Hammond who has been watching is immediately displeased at this hindrance to his domination plan.

Story - 2: A definite filler issue chock full of expositional dialogue and flashbacks. Nothing new really happens that pushes the story along. It's all 'so you missed it, this is what each of us has been up to'. A shame really as the story seems to have become unnecessarily sluggish after an initial burst of promise.

Art - 3: The art is a bit odd. Clark looks incredibly young one minute and older the next. The mix of styles is notable as the story's lack of meat is reflected in the progressive lack and excess of detail back and forth. Just get one artist to finish a book. There are plenty out there that would kill for the opportunity to step up and complete the challenge.

Cover Art - 2: Anyone that remembers the Kurt Busiek insect Queen story from a few years back will understand the shuddering fear this cover evokes... It's beautifully drawn but just a bit... dull.