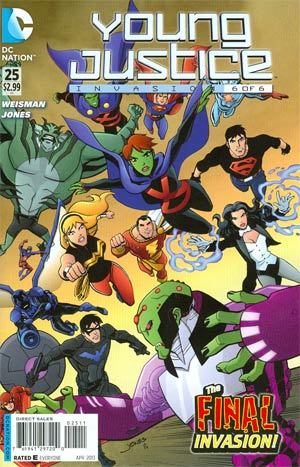 Click to enlarge
December 1st, Team Year Zero and we flash back to Dick Grayson's fourteenth birthday. A game of spin the bottle results in the birthday boy inviting his mystery suitor for that special kiss...

Team Year Five and two teams are taking a beating in space. Nightwing, Wonder Girl, Blue Beetle and Zatanna are being electrocuted by Brainiac while Superman, Captain Atom, Wonder Woman, Captain Marvel and Superboy are being neutralized by Kylstar's defenses.

Suddenly all the orbs on Kylstar's vessel crash into each other and explode, M'Gann has finally arrived and saved them from the barrage from the defenses. Kylstar is bewildered and his personal translator calculates a response. Meanwhile on Brainiac's ship Blue Beetle's scarab instructs him that he can defend against the villain's attack. As he fires a disruptor beam Brainiac is shocked to identify New Genesis technology in the hands of a boy from what he deems is a primitive planet. Despite being counteracted Brainiac sternly reaffirms that he will be collecting Metropolis to preserve it from contamination.

Bee and Beast Boy have finally arrived at the core of the pit generating the force field encasing Metropolis and have figured out how to shut it off. The duo radio in to Batgirl who is just recovering from her fight with Match with the help of Black Lightning.

Back aboard Kylstar's ship it's explanation time. The translation droid reveals that their kidnapper is more than impressed by their feats of power, skill and ability. Kylstar via his droid reveals that his planet was destroyed and the populace has been enslaved. His motivation wasn't really to kidnap them but to assemble a rescue team.

Superboy is suspicious of the explanation, while M'Gann asks if Kylstar was in league with the attack on Metropolis. Some of the other captives back up Kylstar's story about his home planet and as a show of faith and realization that he went about his mission in the wrong way he offers to return everyone to their home planets. He does offer another option though... If any choose to stay and help him save his people he promises that they will be treated well and enjoy glorious battles.

To the heroes' disbelief, many decide to stay, amongst to battle hungry are Major Force and Black Adam and before Captain Atom can wade in they are teleported away. Kylstar might not be as innocent as they assume though as he reveals that the ones enslaving his people are far too powerful to fight now, so instead he will conquer the galaxy first.

Aboard Brainiac's ship, Nightwing's team are fighting tooth and nail against the villain but are no match for his power. Luckily they are bolstered by Flash, Atom, Martian Manhunter and Lagoon Boy aboard the bio ship. Taken by surprise again, their numbers are upped by the arrival of refugees from Kylstar's ship. Lagoon Boy takes a quick prompt from Nightwing and uses the bio ship to obliterate Brainiac's body. Superboy catches his head which is still activated and scans the teen surprised to find a living Kryptonian. Upon second calculations he realizes Superboy is a clone and blasts him in the face.

Team Year Zero flashes to the assassination attempt on President Harjavti. The President's brother Sumaan leaps in front of Deadshot's lethal bullet taking it in the shoulder. Realizing failure, Deadshot tries to make a quick escape across the nearby rooftops but Superboy arrives filled with rage. Unable to control himself, Superboy beats Deadshot to a pulp but as he is about to kill his foe Superman swoops in and pulls him back giving his clone the 'heroes don't kill speech' as a terrified Miss Martian arrives.

Team Year Five and Superboy, struggling to recover from Brainiac's laser blast to the face is surprised when Superman steps up and defends him, swearing him in as much a Kryptonian and he is. Kon-El of Krypton is finally welcomed into Kal's House of El. Superman fries the Brainiac head with his heat vision as Lagoon Boy lands the bio ship.

Brainiac isn't finished with his attack and rising from the floor he is replaced by fifteen duplicates. They scan Kal and discover he is indeed a true Kryptonian but alarm bells ring before anyone can make another move. Brainiac realizes the force field is about to be shut off on Earth. He warns that if the shield is shut off while the reduction beam is active it will destroy the entire planet. Flash implores Brainiac to deactivate the beam, while Nightwing points out that the force field has prevented communication with anyone inside so they can't stop whoever is about to shut it off - only Brainiac can save the world.

Brainiac agrees, he is after all, the collector of worlds not the destroyer of them. He does so just in time as Bee and Garth deactivate the bubble. Plastic Man reunites with the rest of the heroes in Metropolis and Batgirl radios to the rest of the team aboard Brainiac's ship. They might have succeeded but Metropolis and everyone inside is twenty percent smaller as a residual effect!

Confronted by the heroes, Brainiac realizes that if even one Kryptonian survives today perhaps preservation of Metropolis however inadvisable is not completely necessary. Brainiac agrees to re-enlarge the city and leave. Bee reactivates the force field and the heroes put their faith in Brainiac to do what he promised.

The Coluan keeps to his word but Nightwing asks if now that he has seen the light he will release the other cities. Brainiac confesses he can't as the worlds he has in his collection are now dead.

Team Year Zero and Superman brushes off M'Gann's protests, taking Deadshot to hospital. M'Gann turns to the spurned Superboy and points out that at least they stopped Queen Bee's plot. They had a victory that day at least.

However a year later Queen Bee, reveals her plot was always to attack Sumaan NOT the President. Sumaan however didn't die and rose to be a hero to the people of Dhabar, and an even worse irritation to Queen Bee. This unfolding of events prompted a trip to Qurac and a visit to Marie Logan's animal sanctuary, Beast Boy and Miss Martian's mother. Exacting revenge Queen Bee uses her power to manipulate minds to make Marie drive off a cliff and kill herself.

Team Year Five and Queen Bee has found Noor Harjavti's hiding place. Noor screams that even if Queen Bee kills them she will never stop the fight for freedom. The villainess smiles revealing two robot duplicates controlled by creatures inside. Her plot isn't revenge but a strategic maneuver.

Beast Boy and Bee arrive hours later after this turn of events having shut off the force field for good. They find Noor and the others safe and well not suspecting that while they were away an evil plot had unfolded.

As all the heroes watch Brainiac leave, Nightwing brings to question how and why two alien invaders chose the exact same time to attack and disperse their forces. Superman meanwhile is angry at himself. Why hadn't he asked if Brainiac had collected a city from Krypton?

More developments unfold as the heroes realize no villains that were aboard Kylstar's ship are present. As it transpires, Grodd is using his vast mind power to cloak the criminal community and points out that they owe him. Meanwhile, Wonder Girl turns to Blue Beetle amongst the crowd of heroes and asks if he'll accept his membership? Jaime can hardly hide his enthusiasm.

We jump back to December 1st, Team Year Zero. The obligatory 'five minutes in a closet with a girl' takes place and Dick is very sheepish around the young red head. The girl leaps forward and kisses the teenager passionately.

Year Five and an exhausted Dick returns home just after midnight, he's no longer Robin, but nineteen year old Nightwing. Dick sees a familiar red head waiting for him on his doorstep, he greets her with a kiss and asks her why they aren't together. She smiles and says that he isn't ready for her yet, but it's his birthday and she wants to spend a little time with him. Dick Grayson and Barbara Gordon quietly head into his apartment and enjoy a rare quiet night.

Story - 5: Aghh! The series is over and what an ending! So many threads integrating the story with the animated show. It's sad that the book is over and the future of Young Justice is shrouded in mystery. So many moments to touch upon, Kon and Kal finally bonding, the backstory of Dick and Barbara's romance reaching fruition, Brainiac's arrival, all gold.

The only downer was the Queen Bee plot because it has left the reader on a cliffhanger and the show is the only way to see how things pan out.

I wish the book had carried on beyond this point.

I can't recommend this comic enough, so get to your local comic shop or log into Comixology and grab all the issues. It rarely strayed from brilliance.

Art - 5: This finale is brilliantly conveyed through some great artwork. Christopher Jones supplies the perfect amount of action and drama to compliment Greg Weisman's script.

Cover Art - 4: A great action packed cover with the full force of the Justice League and their teen counterparts facing off against Brainiac! I must admit I would have preferred a cover similar to the first chapter of Players, perhaps expanded to show even more of the characters. This cover however is a great example of the epic scale of this six parter.

Again just sad to see this title go. I hope we get a miniseries or digital only continuation someday.