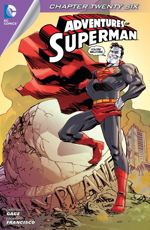 Click to enlarge
Self-awareness is a double-edged sword: you know where you are, but you also know where you're not. And where I never was is precisely where I've always wanted to be - in the light.

I thought I finally had my chance - Dr. Emil Hamilton says he corrected the way my brain processes the signals it receives, and Superman says that means I'm now free to make my own choices. What he really means is that it will now be clear to others that making choices is indeed what I'm doing, which I guess is much the same thing.

I thought things could finally be different. But I scared that lady and her son, even after saving them from that twister. Sure, Superman then held a press conference to introduce the new me to the public, but I can tell they don't, and probably won't ever, trust me. I'm only telling you this because you asked. One of them called me a "monster." And I can hear them all, all of them, all the time - every tragedy and cruelty everywhere at once. How can he stand it?

Story - 4: He says I have to look at the "whole picture," whatever that means. He doesn't seem to see that I'm more alone than he is. I wanted to believe him, but I never had a father. I never even had a friend. So even though it sounds good, and even though that one lady I saved from the burning building kissed me on the cheek, she didn't ask me to marry her, like the lady from the sinking ship did to him. Does he not see how different different really is?

Superman is my role model, but I suspect his life is easier than he realizes, and far easier than mine am ever was or... will be. What exactly am I adjusting to? The hate? The fear? The loneliness? Me say me am fine but then what?

So far, it's all been all too predictable. I can't decide whether that's for good or ill.