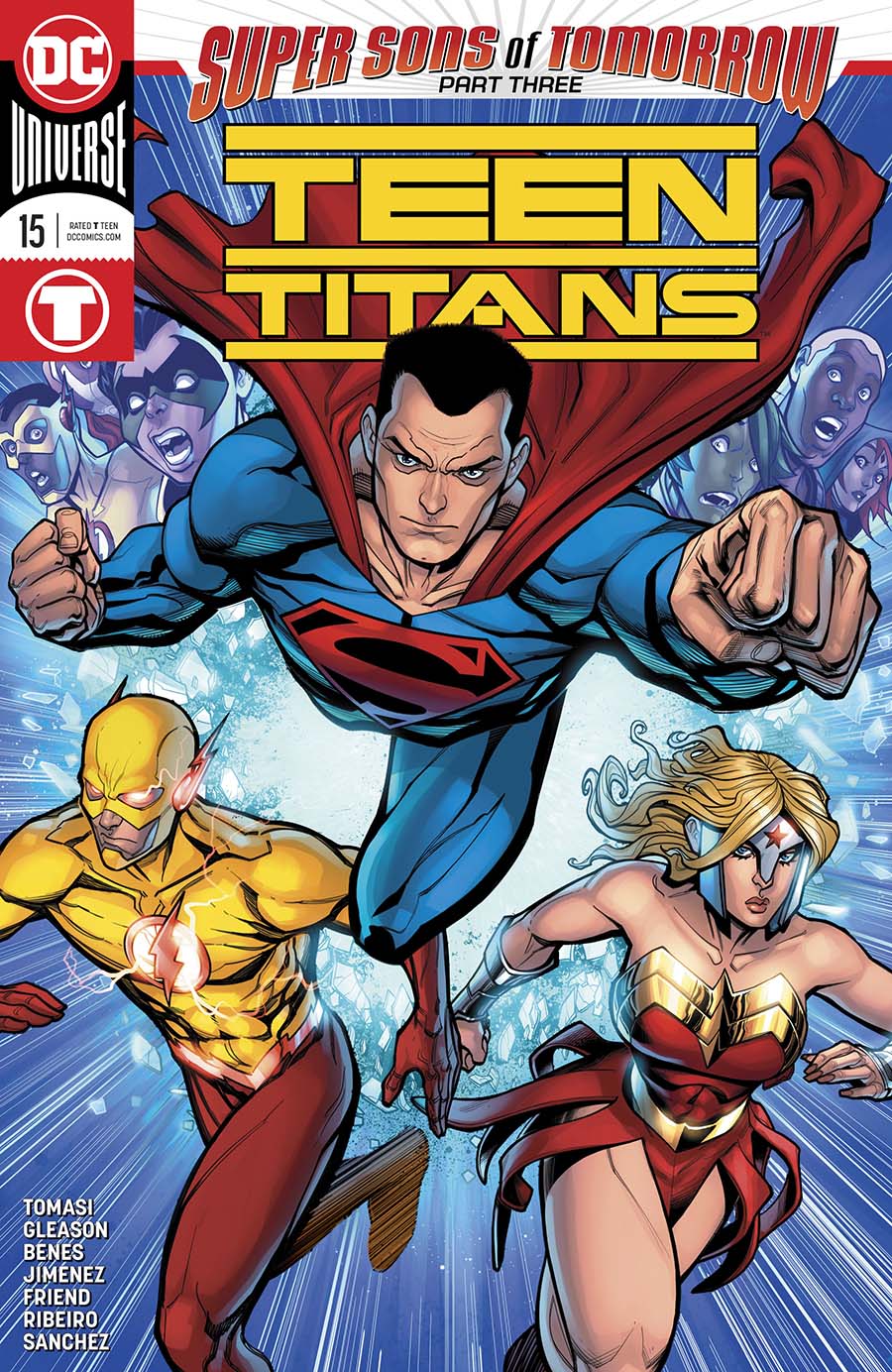 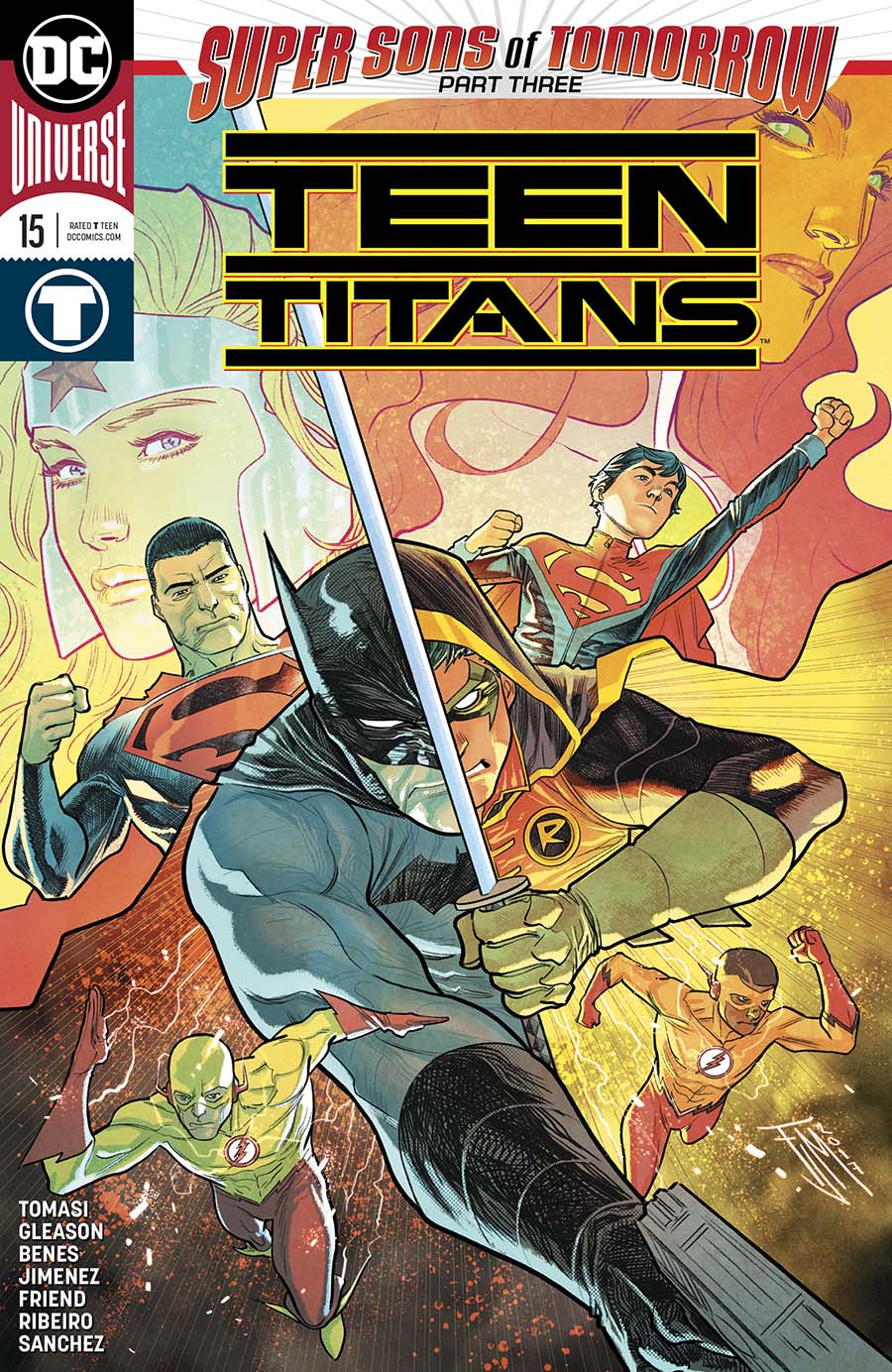 Reviewed by: Keith Samra
Click to enlarge
Carrying on from Super Sons #11, the Teen Titans and future Tim Drake/Batman are dealing with the aftermath of Superboy's solar flare blast. Damian wakes up first and tracks Jon's location, and pulls his unconscious body from the bay.

Meanwhile, the future Tim Drake sheds his Batman suit and assumes a new identity called The Savior, using prototype suits from the Teen Titan's base.

Damian takes Jon away, as far as he can from Savior. He fails at contacting Superman and Batman. Jon thanks Damien for helping him, to which Damian replies that friends help each other.

Conner, Cassie and Bart track Tim from the future, as he disappears from there trackers, once he assumes his new identity.

Tim now as Savior confronts the recently revived Teen Titans. He explains to them why he feels the need to do what he is doing. Raven and Beast Boy side with him, while Starfire, Aqualad and Kid Flash stand in opposition. Raven teleports herself, Savior and Beast Boy away, Leaving the remaining Titans frustrated at the events that have just happened. All seems lost until Aqualad figures out a way to track Superboy. Jon gives off a distinct energy signature, and Aqualad can track them.

Story - 5: Yet again, the team of Tomasi and Gleason succeed in keeping us engaged in a chapter as they tell a compelling story over the course of a few different books.

The first thing I want to touch on is the relationship that both Jon and Damian share. From the pages of Superman and their own book Super Sons, we have watched these two grow from to kids that didn't really get along, to crime fighting partners to now friends. There was some genuine concern from Damien toward Jon's safety. Tomasi has worked hard at fleshing out Damian as a character. Grant Morrison may have created him, but Tomasi really developed him into a character you actually can care about.

I loved the fact that Jon is able to use the "super flare" as a power like his father. I really want to see if he has the same recovery time as Superman does from it. Be nice to see a powerless Jon in these pages for a bit.

The future Tim Drake assuming a new identity of "The Savior"... I don't think I like the name very much, nor the fact that he's a gun toting vigilante. Gotham already has the Red Hood, and the new costume looks like a mixture of Red Hood, Punisher and the Midnighter.

I do have confidence in the writing team, so am looking forward to seeing where they go with the character. Should be interesting to see if he becomes a recurring character from now on.

Lastly the Teen Titans have really struggled to get the ball rolling in this Rebirth era. They seemed to be floundering, so it was good to see someone like Tomasi utilize them better than they had been. Really hope that Tomasi at some point gets to play with this book down the line. Love to see what he can come up with.

Art - 4: Two artists this month, Ed Benes and Jorge Jimenez. Everyone knows I love Jorge's art very much, and love his work over on Super Sons, so the pages he did felt really polished and full of life. I loved his version of Conner, Bart and Cassie, especially the way he drew Conner's suit. It's so similar to the current Superman suit, minus the yellow belt buckle and yellow behind the red "S". He looked like Superman but with subtle differences. Jorge is awesome at capturing the distinct looks of almost all the characters he takes on.

Ed Benes on the other hand is the reason I marked the grade down a bit. I love his art, and have missed seeing it in the pages of DC comics as of late, but sadly I didn't feel it hit the mark emotionally this issue. His facial expressions lacked life, and sometimes the figures looked very stiff the way they were positioned. The lack of backgrounds was also disappointing. However in saying all that, Benes still has a style that has a lot of pizzazz, and a striking quality to it, similar to that of Jim Lee. I'd still love to see his work on a regular titles.

Cover Art - 5: Francis Manapul's cover this month was a lot better than the last. I like the almost Yin Yang composition of it, with the future Titans on one side and the Teen Titans on the other.

Variant Cover Art - 3: Though I love the characters that are featured on this cover, I don't particularly like the composition.