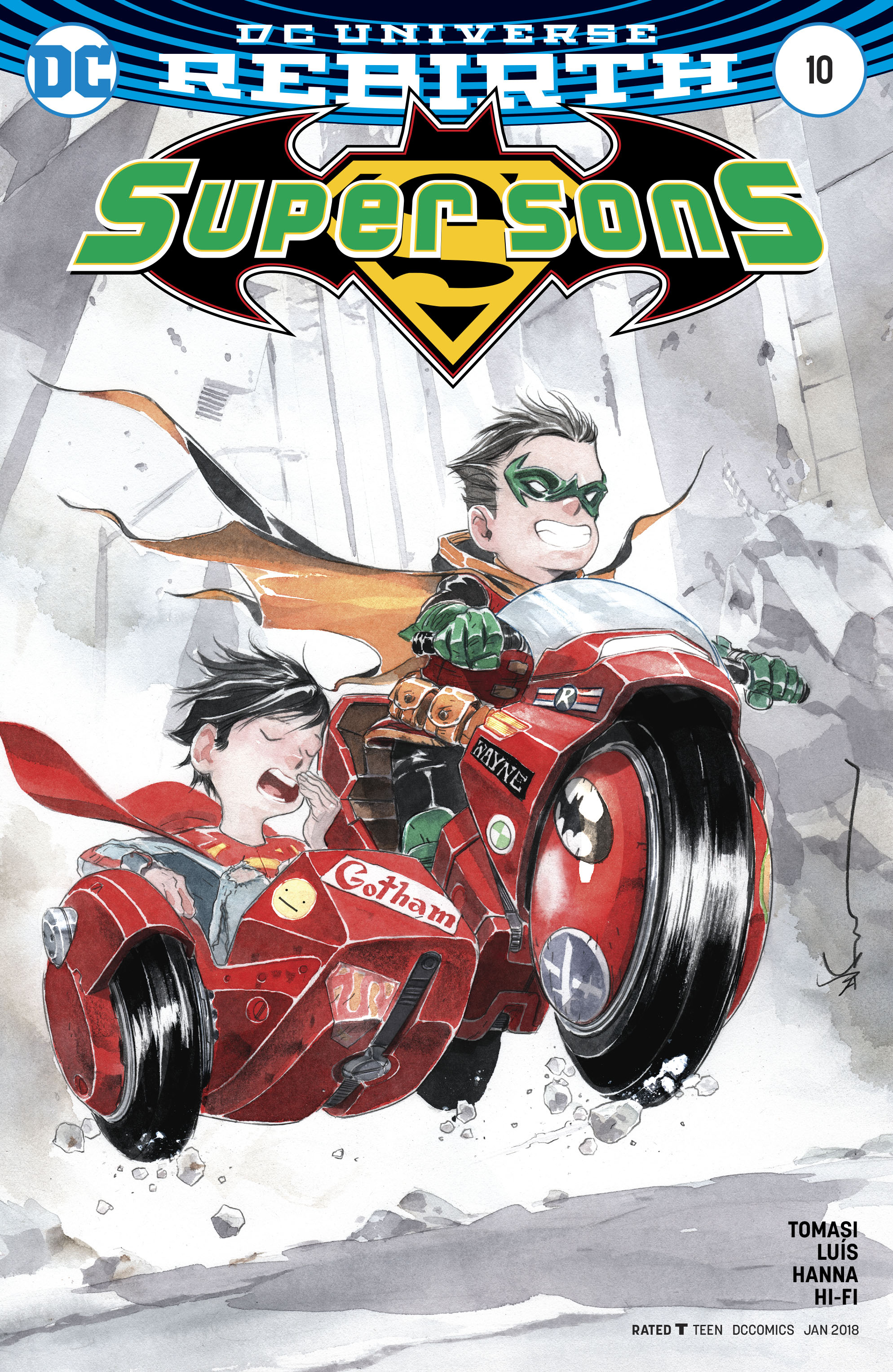 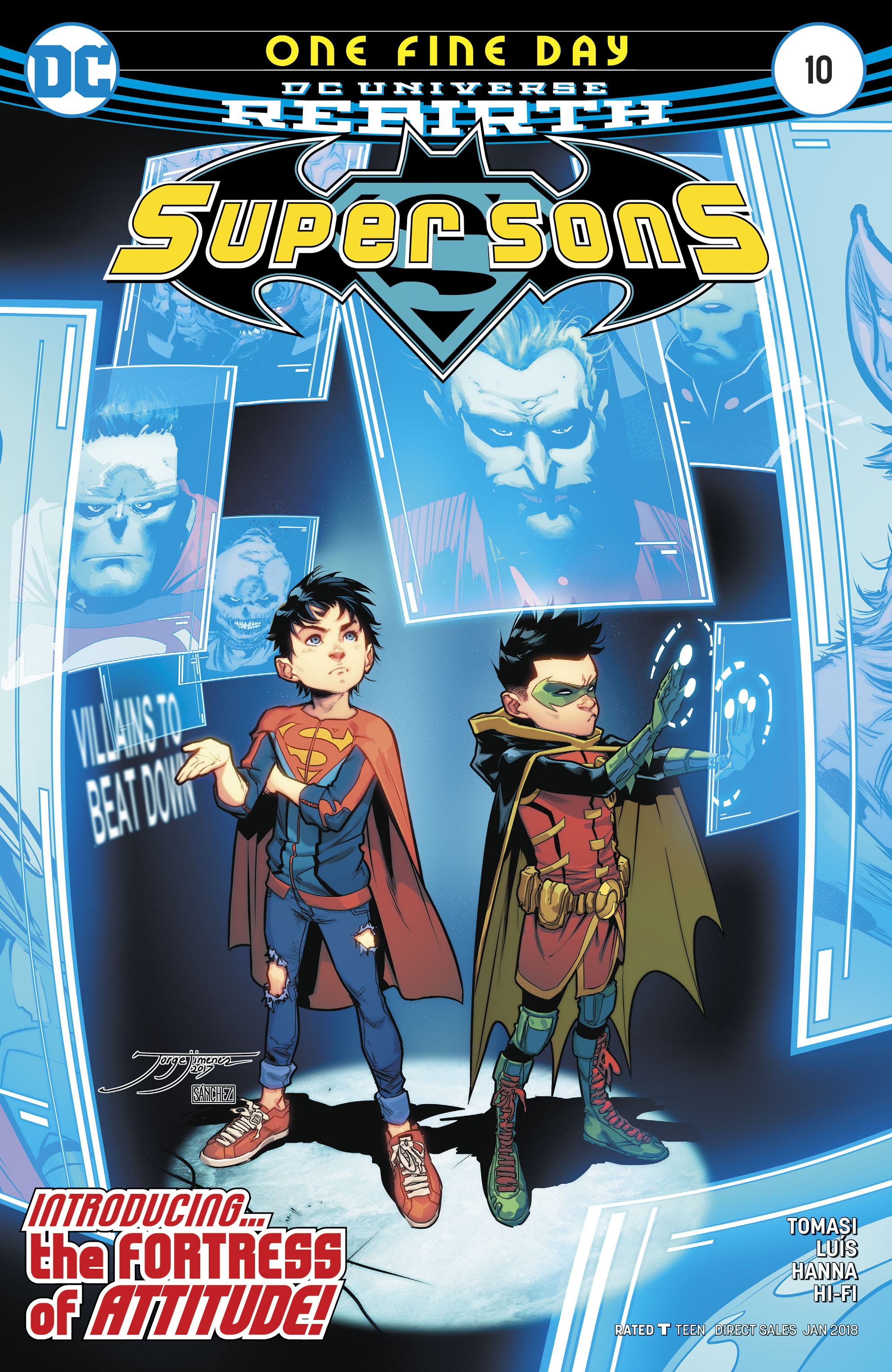 Reviewed by: Keith Samra
Click to enlarge
We open with the boys and their fathers at the Kent Farm in Hamilton County, Clark, Bruce and Damien proudly watch as Jon demonstrates that he now has the ability to fly freely of his own accord. No more leaping in a single bound.

On the ride back to the house, Jon tells Damien to ride on top of the truck roof, with his arms stretched forward. Damien admits it's fun to fly.

Interlude: Through the burning rubble of the once GCPD building, a trench coated Batman rises from it, clutching a purple and green torn off piece of fabric, and says, "The apocalypse is back on, because I say so".

Later that night both Superman and Batman wake up their sons (in their separate homes) and tell them to get dressed into their "work clothes".

They travel to the bottom of Metropolis Bay, to a structure built by Superman that will serve as the boy's new headquarters. Jon names it the "Fortress of Attitude". Both Superman and Batman explain that since the boys work together so well, they are able to handle low level threats on their own, and would require a base of operations. Batman also reveals to Damien that he will no longer be home schooled by Alfred, and that he will be attending private school in Metropolis with Jon.

We end with the boys receiving an alert for their first mission from their new headquarters, a Chemo attack.

Story - 5: I loved this issue. It had everything that this book is known to bring, heart, humor and super heroics.

As per usual, Tomasi's characterization of the boys and their fathers is spot on. Granted that Bruce/Batman was a lot more jokey this issue, but it's a welcome change from the gritty brooding loner Bat-God that he had become. I really enjoyed his banter with Clark about becoming an investigative reporter, and Clark contemplating becoming a Billionaire playboy.

I like the progression in the personalities of the boys. Batman's line "I don't recall you talking this much before you became friends with Jon," is a perfect example of Tomasi making Damien more interesting to read, rather than the drop kick he was when he was first introduced. Tomasi has really made Damien grow on me. The scene during the ride home when Jon gets Damien to act like he's flying while belly first on the truck, this is something I myself have done on my uncles farm. A great humanizing scene right there, something that any kid would want to do, given the chance.

As always, Jon's hummingbird attitude of always staying so chipper never gets old. I love that he is so excited almost all the time. I mean being a 10 year old with super powers, how else would you be?

The idea that Damien will be attending private school is very intriguing. I'm looking forward to seeing him take on kids his own age, and try and fit in to a high school social structure, while trying to avoid the eager Jon from hanging around him all the time.

The interlude or rather the Intermezzo was an interesting aspect. It showed me that there is something big to come, and that Tomasi has a larger and greater plan for the boys. I really wonder what significance the purple and green fabric holds. After all, those colors belong to both Lex Luthor and the Joker.

All in all, another great issue written by Tomasi. Though I hate to say it, Batman was the real MVP for this month, with his sarcastic humor and great dialogue, as evident when Damien kicks up a fuss about having to go to private school. "And that is exactly why you're going. You're too young to be this angry".

Art - 5: Jimenez is taking a break this month, instead we are graced with Jose Luis art, and I must say, I wasn't too disappointed in the least. I have always enjoyed Luis renditions in the past, and was glad to see him get some work here. Some panels seemed a little rough, I think due to the fact he inked his own work this time around, so maybe deadline issues, but nothing to cry about.

Luis has a sensibility very similar to that of an Eddy Barrows, in both scope and character work. I loved his Superman, he had the right build, lean and tall, similar to that of a Jose Luis Garcia Lopez, while his Batman looked as if he could be up to something under his cape, ready to strike should he need to.

Luis captured the attitude of each character really well, and that's what you would expect from any artist on any book, it wouldn't matter what the art style may be, so long as the characterization is spot on.

I loved the design of the "Fortress of Attitude," how it is built from shipping containers and rail cabins. Too many times we see these elaborate, expensive looking bases, and makes you wonder, how and who built that?

My favorite panel though is the look on Damien's face when Jon gets him to "fly" on the roof of the truck. Pure gold.

Lastly, I don't know if this was a mistake on Luis part, but I had to ask myself, why is Bruce Wayne driving the Kent's farm truck? Regardless, its fun to see the Billionaire drive an old 50's style truck... You'd think though, that Lois and Clark could have afforded something a little newer!

Hi-Fi's colors really fit the tone of the art. They weren't overpowering or anything, but they did bring some life to the page and the art.

Cover Art - 5: As per usual, Jimenez provides a cover that makes you want to pick up the book and see what its about. The Variant by Dustin Nguyen is cute, I like the washed out look to the colors of it.