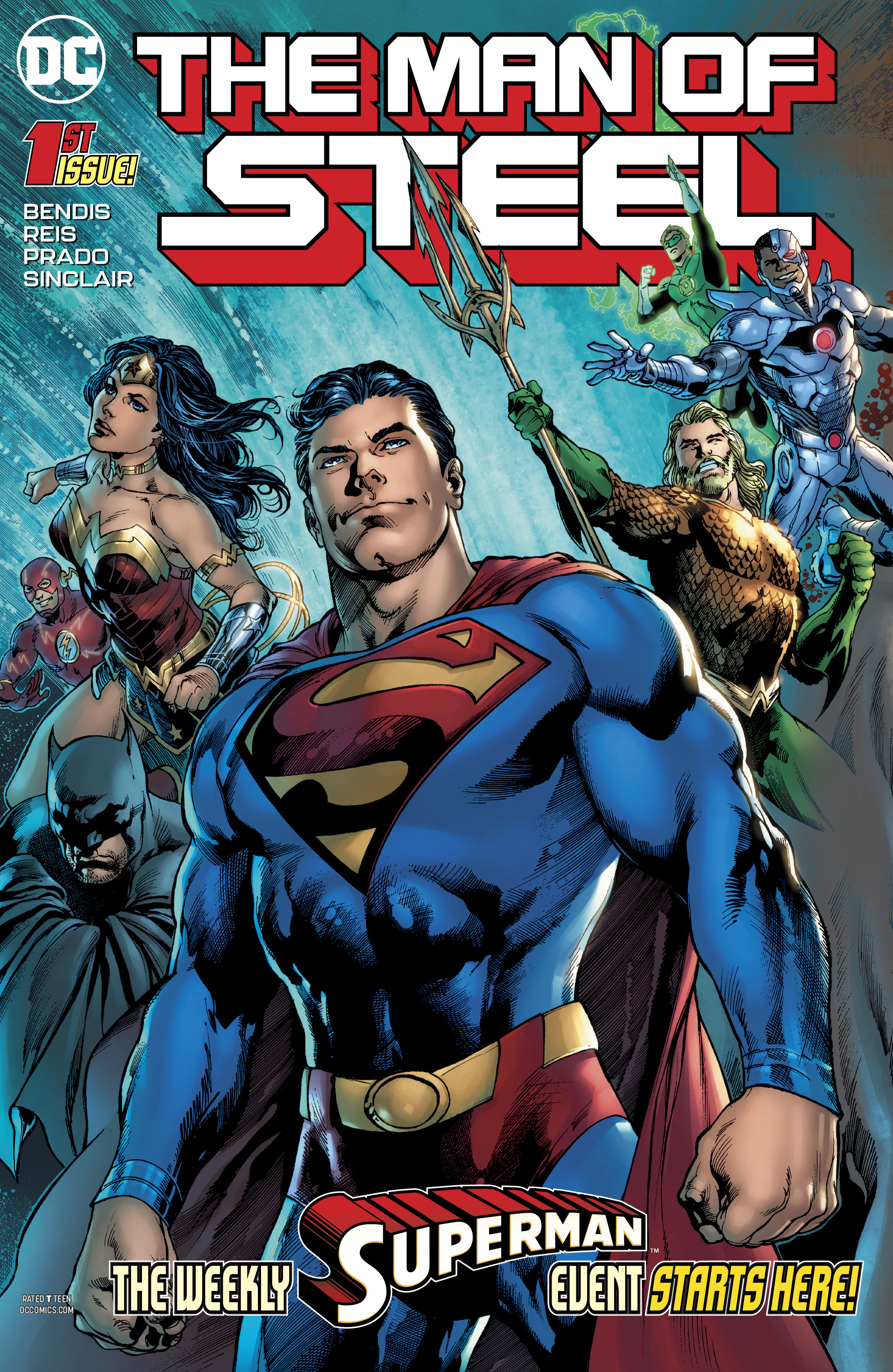 Reviewed by: Keith Samra
Click to enlarge
Our story begins, years ago, Rogol Zaar speaks with "The Circle", of the evils that the Kryptonians pose to the universe, and how he suggests that they all be eradicated.

We cut to the present in Metropolis as the villain Firefly is hiding out, and is confronted by Killer Moth, looking for his cut of the money. Firefly warns him repeatedly that "He listens for yelling", and before they can think twice, they are swooped away by Superman, and taken to the authorities.

Later Superman hovers above Metropolis, listening to the sounds of the city, when he comes across people in peril. He flies down to a burning building and rescues those that are trapped by the blaze, he then at the request of the fire marshal puts out the fire. Upon inspecting the rubble, he meets with the new deputy fire chief, Melody Moore. They both discuss the possible origin of the fire, and Superman assures her, his friend Clark Kent will help look into the recent tenement fires throughout the city.

We cut back to years ago, on a distant alien world, where Rogol Zaar is fighting a native beast, managing to kill it. He is visited by one of the Guardians of the Universe, Appa Ali Apsa. Appa informs Rogol that he and the circle took into consideration his pleas regarding the Kryptonians and they all decided not to take any action against them, and their fate is their own. Rogol is none too pleased with this decision.

In the present, Superman flies back to the Daily Planet where, as Clark Kent, he is greeted by Perry and asked about what story he is working on. Clark tells him of the recent arson around the city, and gets back to work. He looks at his desk, and sees the photo of Lois and Jon, and starts to think back...

In a flashback we see Jon is complaining about having grown too big for his Superboy sweatshirt he uses for his super heroics. Lois is on the phone in the kitchen, playfully mocking their son. Clark asks about the story she is working on, when a bright light hits them. The last words we hear are "Dad what is...? Oh!" and Lois saying, "Clark..."

Story - 5: Let me start by saying, this series is certainly not a reboot, or a relaunch... If I were to call it anything, I would call it a Pilot. A Pilot to what will most likely be referred to as the Bendis era. I read in an interview years ago, that in 1986, John Byrne was willing to jump onto the Superman books and work within the then current continuity, but it was the decision of the editorial team for a full reboot. It seems that Bendis may be taking that approach to his run on the character.

With that said, this was a great first issue by Bendis. We follow the narrative on three different timelines throughout the issue, from years ago before the destruction of Krypton, to the present, and left on a cliffhanger of some event that happened not so long ago, regarding Clark's family.

I'll admit, I felt great trepidation about Bendis coming on board to the Super titles. Especially since the books have been so great as of late in the Rebirth/Reborn era. But Bendis did a great job on his first issue. Superman still felt as Superman should, he saved those in trouble, and bought those to justice that needed to be. Bendis didn't over power the issue or the character with any ego or overly heavy dialogue or exposition.

I especially loved how courteous he was to the new deputy fire chief melody Moore, leaving her in awe, as he flew off. She is a character I feel we will be seeing a little more of in the near future. I loved the little joke of Superman saying that Batman is the one that usually drops the bad guys, when he flies Firefly and Killer Moth to the authorities. Also loved the attention to detail, how Superman listens out for yelling and certain words, while he is on patrol. This makes the super-hearing powers a little more understandable, seeing as how he simply can't turn his hearing off. Also loved the way Bendis wrote the line "language please" as Superman tells the little girl he saves when she says him and says, "Holy $#!+". A simple request with a smile on his face.

The Rogol Zaar plot, of him being involved in the destruction of Krypton so far has yet to be played out fully, but I am liking what he has done with it in just one issue. Simply put, he left me wanting more. There is a definite passing similarity to the Earth One graphic novel by J. Michael Straczynski, where a character named Tyrell was responsible for the destruction of Krypton. I have no doubt that Bendis will write something completely different, and write it well, but I did feel like I needed to mention it.

The other big question is what happened to Lois and Jon. I know many members of the Homepage were a little worried about what Bendis has planned for them, mainly if he will be dissolving the family dynamic. In interviews he has stated that he doesn't plan to do anything of the sort, but to expand upon it. As I stated before, he left me wanting more, so I am looking forward to seeing what the particular light was, and what did it do to the Kent family. Again, I was reminded of a past Superman story when reading this, namely Superman: For Tomorrow, where the event "the vanishing" took Lois, and Superman had a hard time coping in the aftermath.

As a life long Superman fan, I couldn't ask for anything more in a Superman comic. Bendis treated the character with respect, and kept his word that Superman would be portrayed as he should, beloved amongst his family and friends, and respected by everyone else. All in all, good well written issue, with making me look forward to the next one.

Art - 5: Ivan Reis on art duties, an instant 5/5 in my book. It was good to see him return to Superman, especially after so many years, where his art has matured and become even better than when he first worked on Superman in the mid 2000s.

I was a little disappointed when I learned that he would only do one issue of this miniseries, and that each issue would feature a different artist. I am not a fan of multiple artists drawing a single series, as I feel the shift in art styles take me out of the story at times. However, editorial team has lined up some of the best artists at DC, so I can't complain.

The highlight for me was seeing Superman looking so regal once again, in his iconic/classic look with the trunks. Even though I liked the "Reborn" suit, with the stylized belt, seeing the suit as it is felt exciting. Reis always drew the suit well, and made it look awesome, so this issue was no exception to that. Also loved the way he rendered Clark, with the slicked back hair and the horn rimmed glasses. Jimmy and Perry looked updated but still had the classic feel to them as well. Other characters such as the little girl he saves holding the puppies and Melody Moore, had a lot of character to their faces and expressions. The flying scenes looked epic, I think any artist tackling Superman needs to be able to have at least one epic pose for flying.

Rogol Zaar I think was designed by Jim Lee, but Reis manages to bring him to life rather well. He has a passing resemblance to the Marvel villain Terrax, but as I mentioned above, Reis manages to do wonders with the facial expressions.

It is a little sad to see Reis not do the rest of the series, but we will be treated to some awesome talented artists in the issues to come, and Reis knocked this first issue right out of the park.

Jason Fabok handled the last 2 pages of this issue, and the art seemed so seamless, that I almost didn't realize the change in artists at first. Why Fabok did the last couple pages, I have no idea, but his pages seem to integrate well with the rest of the issue.

The coloring is always top notch when Alex Sinclair takes on the duties. I read this issue digitally, and the screen made the page look very vibrant. Really hope that he continues with the rest of the series. Loved that the flashback scene of the Kent's home, had a very warm sepia feel.

Lastly the trade dress, or rather the typeface used for this series. It's directly lifted from the 1986 mini-series of the same name, by John Byrne. Was a nice little nostalgic feel.

Cover Art - 5: Ivan Reis is doing all the covers for this series, and they will form one big image. We have seen this for many months already, but still, it looks amazing, and deserves a perfect grade. Even though the Justice League were not present at all through the issue.