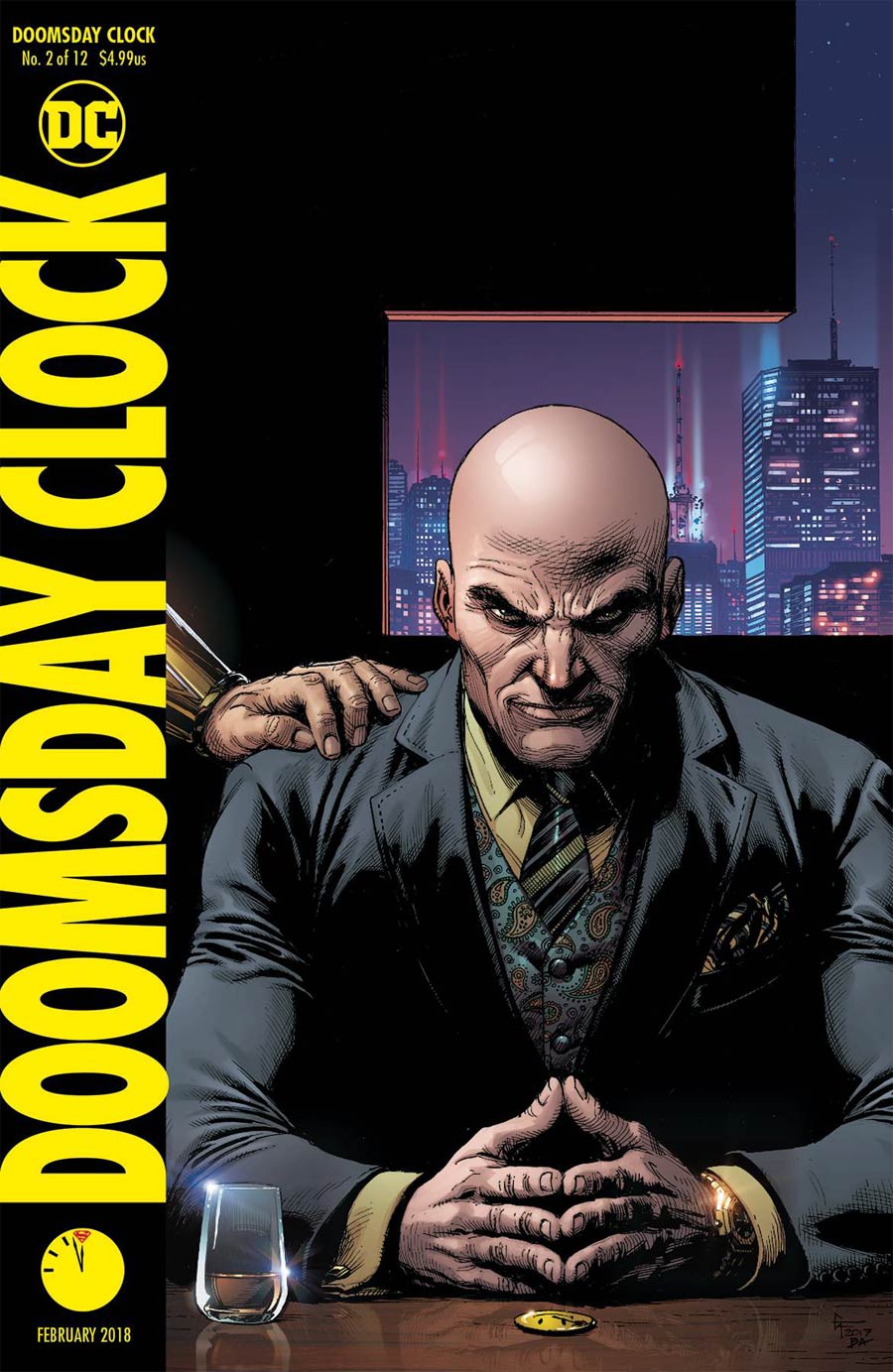 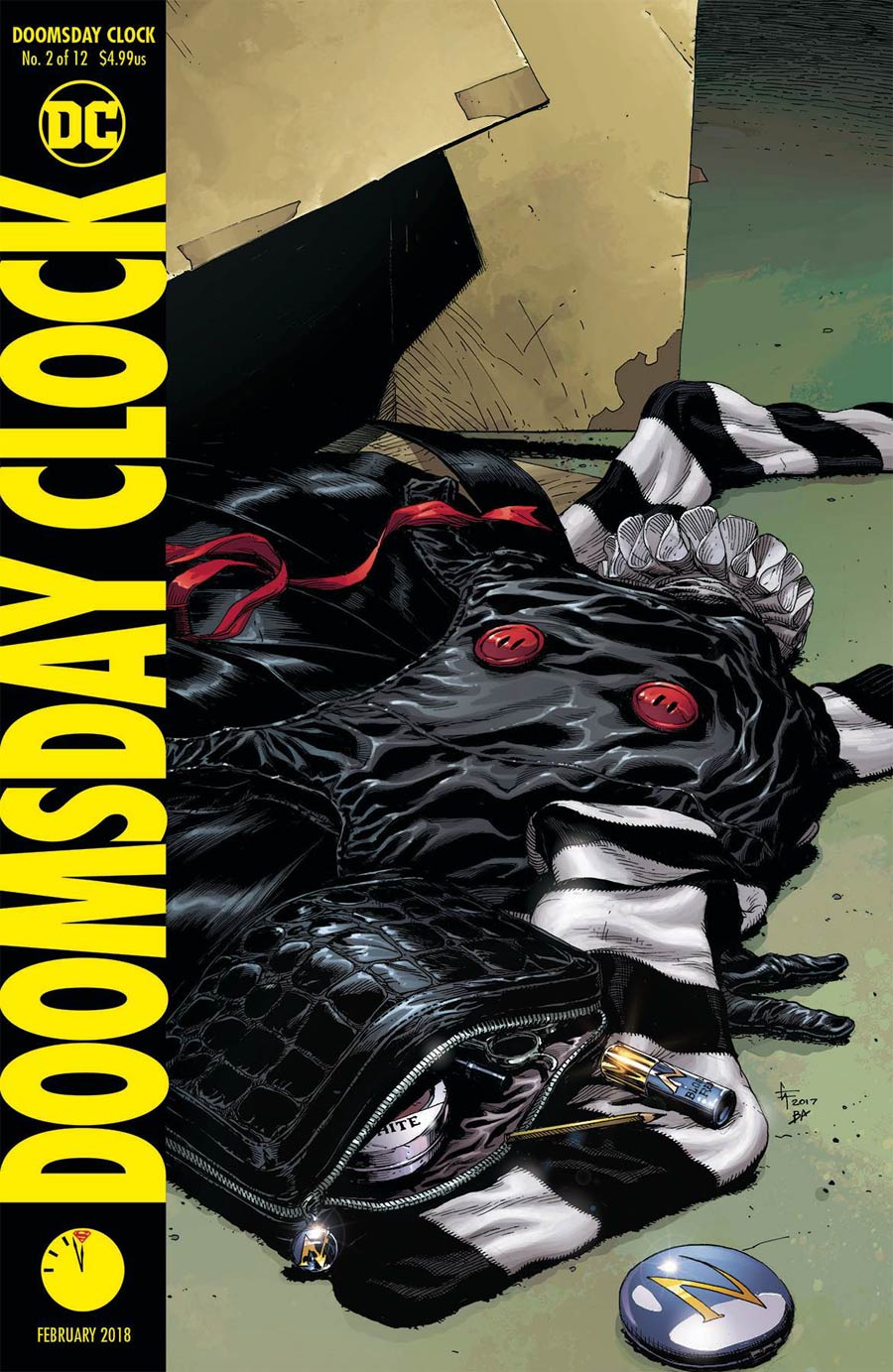 "Places We Have Never Known"

Reviewed by: Keith Samra
Click to enlarge
Our story begins with the Marionette and the Mime dressing up in their "super villain" costumes, with a flashback sequence of their last bank heist. Dr Manhattan appears to stop the robbery and is about to eviscerate the both of them, but stops for some odd reason. He realizes that Marionette is pregnant, and spares their lives.

We then cut to the present day, as Ozymandias retools the Night Owl's ship into an inter-dimensional vessel, as he, Rorschach, The Mime and Marionette, cross over into the Earth 0 (DCU), just in time before the missiles hit.

Over on Earth 0, we find Bruce Wayne taking a Rorschach test for an annual psyche evaluation, as head of the Wayne Industries Board. Afterward Bruce and Lucius Fox discuss the reason that Bruce has to go through this once a year, and the looming threat of the board's consideration of selling to Lexcorp, which in turn would put an end to Bruce's alter ego as the Batman.

They both look on to the protestors on the streets below, protesting the continued existence of Batman in Gotham. Bruce explains to Lucius that "Gotham needs Batman", to which Lucius replies that "Gotham doesn't want Batman".

Meanwhile, Night Owl's ship crashes down into an abandoned part of Gotham. Ozymandias is the first to gain consciousness, and he wakes Rorschach next. Rorschach falls into a fit of rage at the sight of Ozymandias, only to be snapped out of it by him when he calls him by his real name "Reggie".

They both cuff Marionette and the Mime inside the ship, and take off to find information at the local library. They set out to find the two smartest men on this Earth. Ozymandias heads for Lex Luthor, while Rorschach takes the second in Bruce Wayne.

Rorschach gets to Wayne Manor, and first decides to eat breakfast that Alfred had made for Bruce when he comes home from a night of crime-fighting. He then discovers the entrance to the Batcave through the giant grandfather clock. He trips the alarm, which alerts Batman.

Ozymandias makes his way to Lex Luthor's private office, to which a very surprised and arrogant Lex tries to make light of the situation. Ozymandias explains where he comes from, and how he attempted to bring humanity together on his world, but failed. A cocky Lex tells Ozymandias, "if you're the smartest on your world, I'd hate to meet the dumbest".

Just then, Ozymandias senses an imminent attack, he ducks, and a bullet that was meant for him, hits Lex instead. The shooter is revealed to be none other than The Comedian, one of the Watchmen that Ozymandias himself killed on his world.

We end with Batman coming face to face with Rorschach in the Batcave, and a set of open handcuffs in Night Owl's ship.

Story - 5: Geoff Johns did state at one pointy that Doomsday Clock is more of a direct sequel/continuation of Watchmen than what we may have expected, in terms of a Mega DC crossover. That is quite evident here, with the main focus really being on Ozymandias and his current mission to track down Dr Manhattan with the help of the new Rorschach along with Marionette and The Mime.

Ozymandias appears here to be more of a fallen hero, than what he was in the original series, a man possibly trying to right one of his wrongs.

This issue I felt was a little slow in its pacing, but very methodically written. Johns is sparing no panel of each page, without putting clues and Easter Eggs. He is managing to capture the tone of the original series, without losing his own style... That includes the high level of violence.

It was a little confusing at first reading the flashback sequence of Marionette and The Mime. Simply because it felt like it may be happening in the present. It wasn't until Dr Manhattan appears that it becomes clear that it's actually a flashback of how Marionette and The Mime came into contact with Dr Manhattan, and why he spared them both. Marionette's pregnancy could be a call back to Watchmen, when he failed to save The Comedian's "mistress" from being killed back in Vietnam.

Speaking of The Comedian, it raises the question as to how he is alive and on Earth 0. Could the trans-dimensional travel by Ozymandias and his crew cause some sort of time rift or did Dr Manhattan himself somehow bring him back?

Take note that he is wearing the smiley face button, which was last seen in "The Button" storyline, where Reverse Flash drops it when he comes face to face with Dr Manhattan, before he dies and then its picked up by Dr Manhattan.

Johns has finally written something that I always wondered why no other writer had ever tried to explore as a plot point or arc, which is, Lexcorp trying to take over Wayne Industries. Both Bruce and Lex have clashed and or done business in the past in different media. It only feels logical that someone like Lex Luthor would try and take over a company like Wayne Industries.

With Lex and Bruce being established as the smartest men on the planet, it would make for an interesting plot device.

One thing that I failed to touch on last issue, that I felt was just me nit-picking, was the use of course language. Not a fan of it. I know that comics, even DC comics have had it in the past, but I feel it takes me out of the story when I read it. However this is only my view on things. I'm sure many don't even notice it.

Curious to see why Ozymandias is having headaches in such a way, my first inclination is that he may have become "ill" due to his close contact with Dr Manhattan in the past.

The Mimes "abilities" also make me curious... Does he actually have some form of power, or does he possess "Invisible weapons" of some sort? He is a mystery all to himself.

The line about Dr Manhattan being disguised as someone in the DCU intrigued me a fair bit. So far we have had glimpses of him, such as The Button crossover where he kills Reverse Flash. He being disguised somehow, walking amongst the heroes all this time is an exciting idea. I hope Johns explores that down the line.

Lastly, we may not have gotten any Superman this issue, but we did get a fair bit of the Batman. And what was more interesting was that the impact that he has had on his city, with people lining up in the street protesting his existence in their lives. Very real world, I can see where Johns may be drawing his inspiration from. This is something I really would like to read in the regular titles at some point. But I really hope that Johns takes this little plot point somewhere with a little more impact.

I like this series so far, the info dump at the end is a good way to give a little more background, and is a better companion in my book than the "Curse of the Black Freighter" from Watchmen.

There is so much content in this series so far, it's actually good to read a series that you know has been meticulously planned, and executed with such finesse.

Art - 5: Gary Frank once again proves that he is one of the best in the industry, and the only logical choice to have taken on the art duties for this project. He's great at mimicking the tone and capturing the feel of Watchmen, as well as interjecting his own detailed style in to every panel.

I mentioned it last time around, but the nine panel grid used in most pages not only carries on from Dave Gibbons work, but also forwards the story in a cinematic way.

Our first look at the appearance of Dr Manhattan in the flashback scene feels like it's lifted from Watchmen almost, but also brings a sense of awe to the appearance of a character that carries such gravitas about him. Aside from the Before Watchmen series from a few years back, this is the first full appearance of the character since the late 80's in an actual story. He has a definite messianic feel about him, more so than Superman I think.

Frank has always relied heavily on his own drawing ability over using after effects in say Photoshop to tell his stories, which works well for this particular story. For example when the Owl Ship arrives in Gotham, it flies through the bat signal projecting off of some clouds, the lights of the ship looked like glowing eyes to the bat signal, very eerie feeling, but also a very cool visual.

Also where the Owl Ship crashes is another nice little treat by Frank, as it resembles very much the same carnival that the climax of the "The Killing Joke" takes place in.

It's the small details that really put the art over for me, such as the scars on The Mimes body, Rorschach's ever changing "face", the graffiti on the Lexcorp signs, the painting in Lex's office and the old school Mr Freeze costume in the Batcave.

I find myself pouring over the art as much as I can, just to catch any possible clues or Easter eggs. I wonder what significance Mr Freeze's costume holds.

I can't leave without mentioning the color art by Brad Anderson once again. His palette brings this series to life. It's vibrant, but not over powering, the "special effects" don't drown the line work, but give each page enough life to make it stand off and make you forget that it's all two dimensional. I only wish that the flashback panels were colored differently, so that we knew what they were. Then again, that would have lost the power of Dr Manhattan's appearance, as his blue glow is a part of his mystique.

So far the art and the story are a perfect marriage, looking forward to the next issue.

Cover Art - 3: I only received one cover with my copy of this, which was the scattered clothing of the Mime and Marionette. It's not a cover that would make me want to pick this issue up, had I not already been collecting the series. I like the advertised Lex Luthor one better with Ozymandias hand on his shoulder.