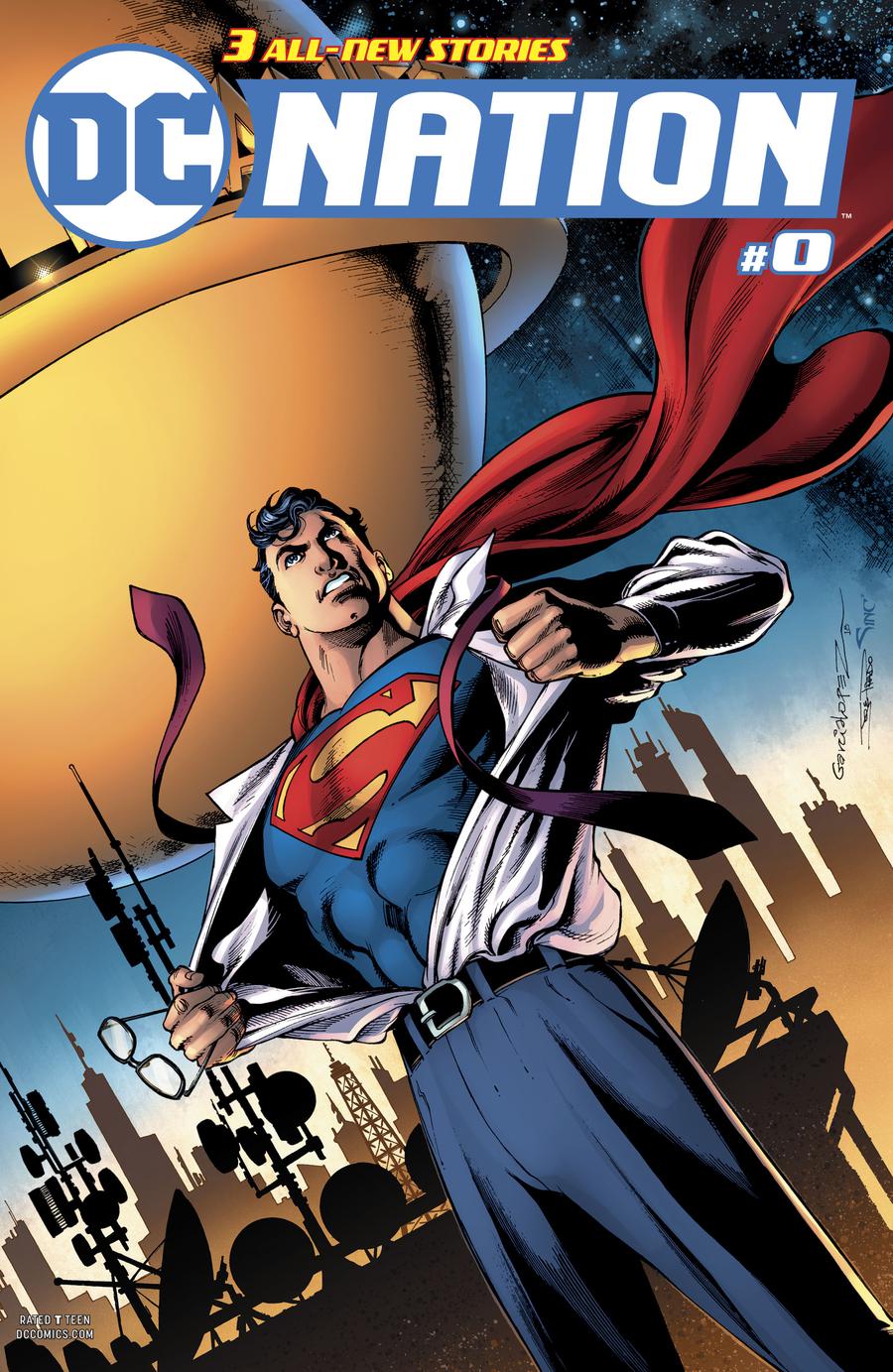 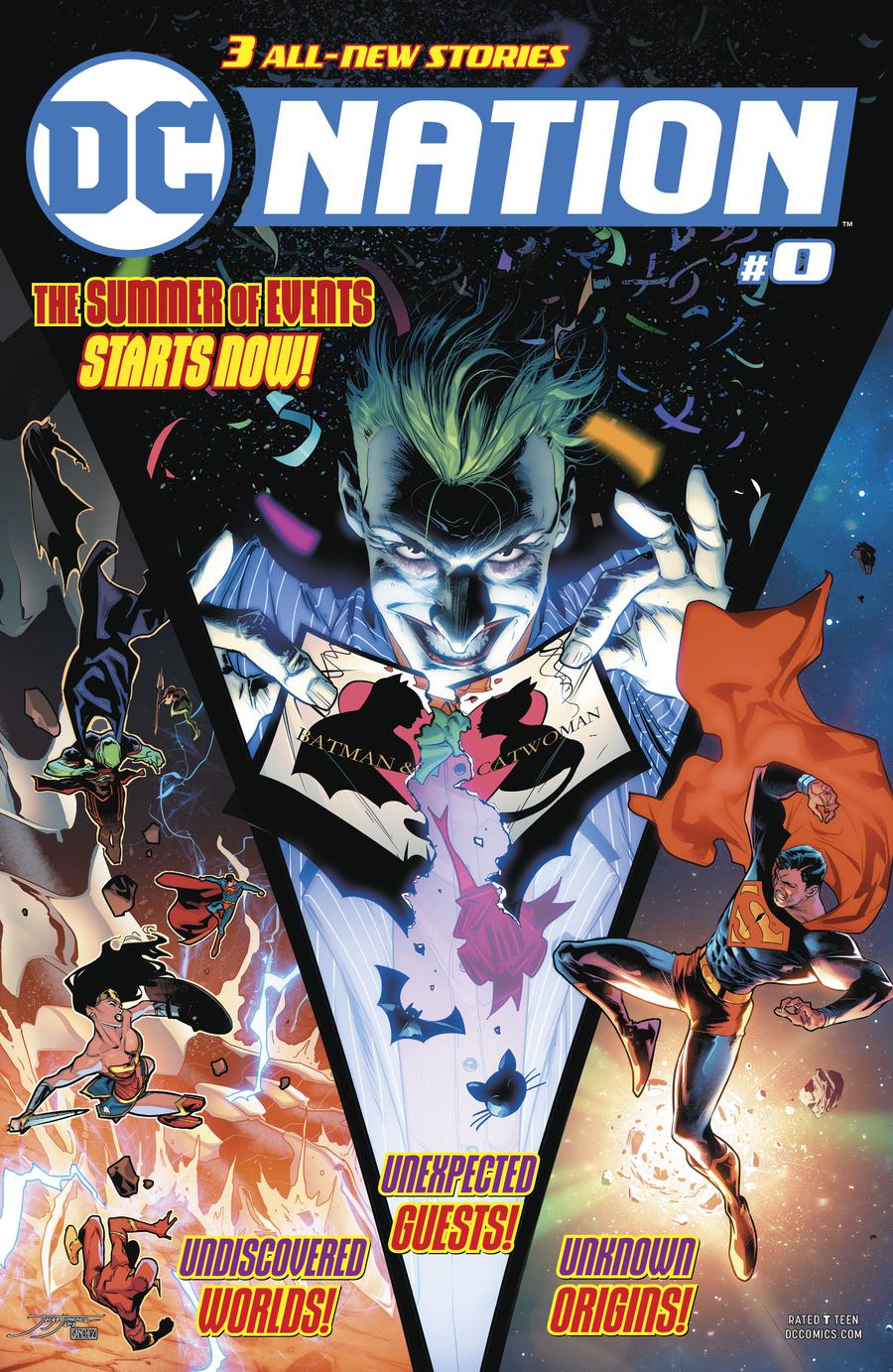 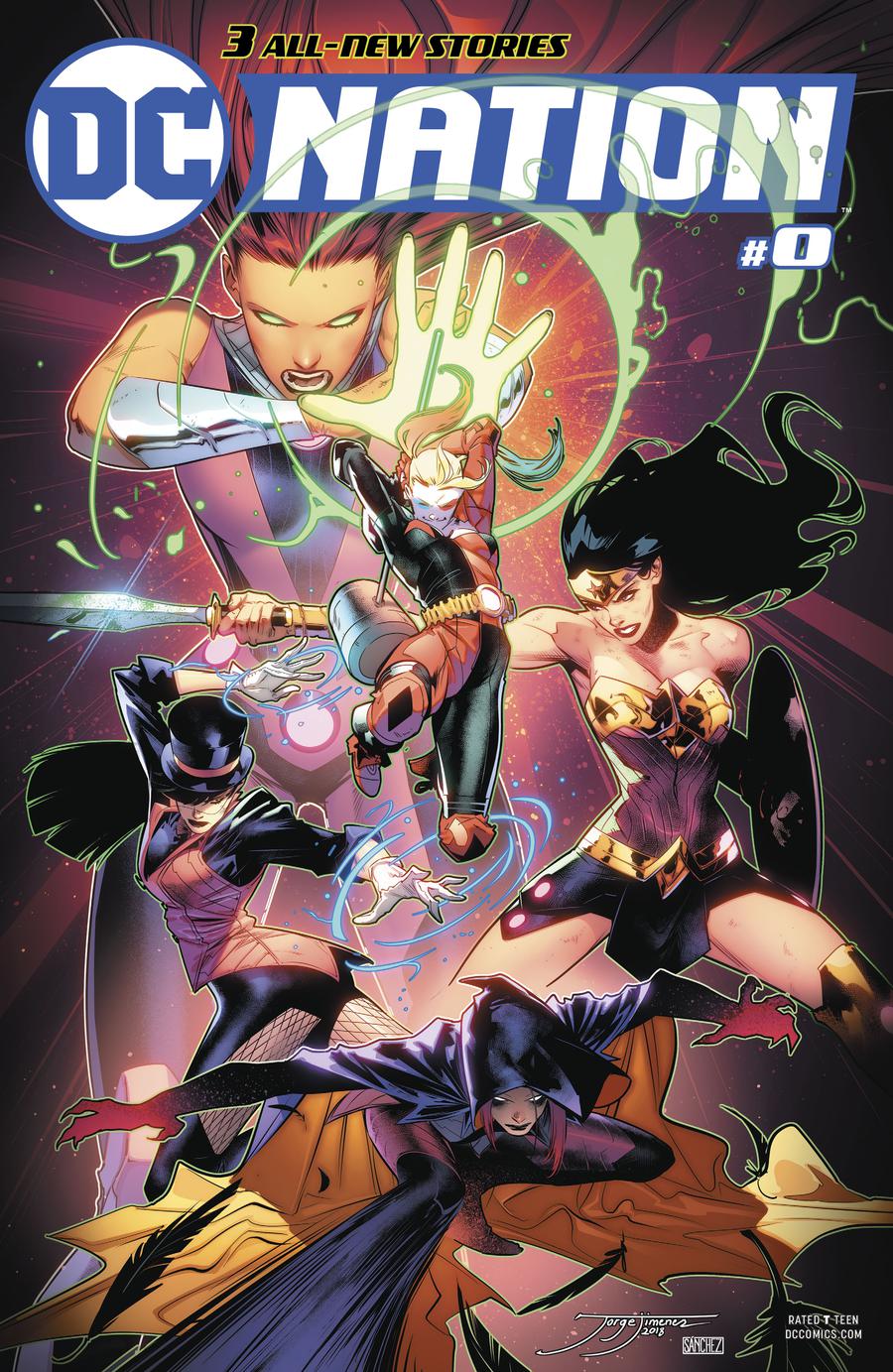 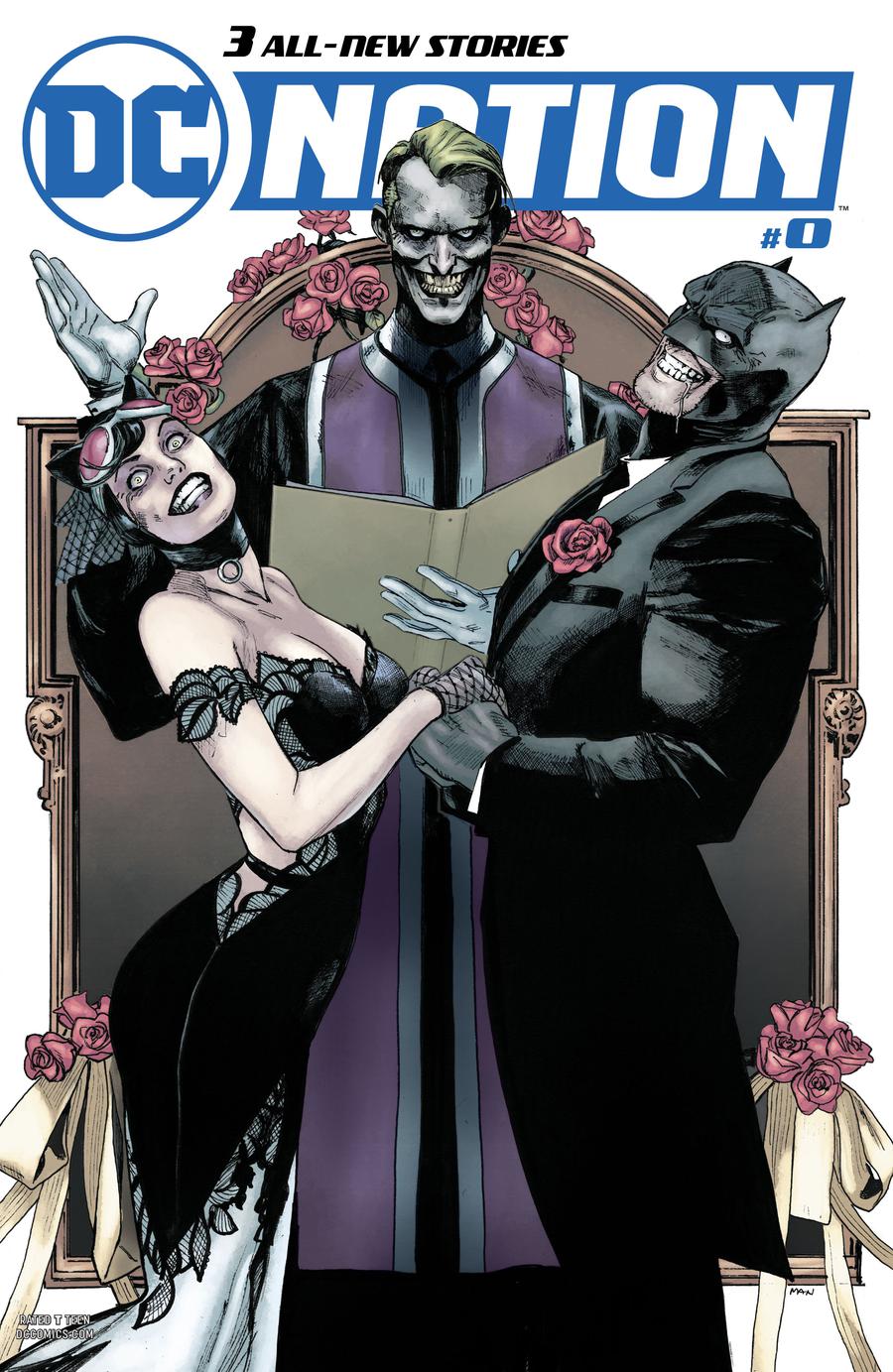 Robert Martello is awaiting an acceptance letter for his young daughter Mary's new school, the postman is awaited with nervousness.

Robert is not alone, the Joker has broken into the Martello host in hopes of a letter too.

With the postman taking his time with the mail, this leaves the Joker time to torment Robert psychologically and so begins a torturous wait for a letter.

Robert is one of the few Gothamites invited to the Wayne wedding and unfortunately the clown prince wants that invite for himself.

It doesn't end well when the mail finally arrives.

Story - 5: It is difficult to review any of the stories, as they aren't stories at all. More the opening act, like the lead in to the opening credits on a television show.

That said each does exactly what they set out to do, excite the audience for what is to come.

The Joker's story is him exactly as you know him. Marching to the beat of his own drum, entertaining and chilling at the same time.

I haven't been reading Batman aside from his appearances in Justice League of the Superman books but I take it from the dialogue that he knows Bruce and Selina are Batman and Catwoman. After such an agonizing wait for the mail it is a sad ending, but inevitable. No surprises really, as I'd be shocked if Batman's wedding went off without a hitch.

The mastery of the story is that the art lulls you into a false sense of ease. The Joker remains manic but not psychotic, not till the final moments are you reminded just how dangerous he really is. Mann deserves praise for enhancing the script beyond a short story.
"Office Space"

Perry is not happy with the Planeteers in the newsroom.

Lois has gone missing and Clark isn't delivering work up to his usual caliber, mostly due to his heroics as Superman.

To try and motivate his staff, Perry gives them a talking to and tries to convey his wisdom to Clark about improving his writing.

Still the absence of Lois has dealt the staff a feeling of unease and even the arrival of Robinson Goode, a highly regarded journalist from Star City does little to help matters. Robinson does her best to get to know Clark and the others and after work a liaison with a stranger reveals Goode is up to anything but.

Where is Lois? Why is Clark struggling? What is Robinson up to? We'll find out in Man Of Steel #1.

Story - 5: The star attraction... The prelude to "Man of Steel", is it everything you'd hope for?

The short answer is yes. The Planet is centre stage, Superman appears of course, but the staff in the Newsroom are the true stars.

Perry is back to his strongest, a real news man and not afraid to read Clark the riot act for not delivering his best. It has a 'classic' feeling, if you've ever watched the Ruby Spears Superman series, this feels like it was written as an homage to the era. Notably Lois Lane is absent, not for shock value as it was in the New 52 era but as a story point that actually allows some of the other characters to flourish. Lois is obviously going to be a big part of this, so foreshadowing with a mystery is a great way for her to make an entrance.

Now for Robinson Goode, yet another addiction to the Planeteers, as is almost ceremonious with each retelling. This time however she has a reason to be there and it sets the stage for something big in Superman's future. Anyone that was nervous for the arrival of Bendis needn't be. This was just a teaser but if the writing continues this way it looks like we're in for a fun ride.

Art - 5: There is a reason Jose Garcia Lopez is so highly regarded in the world of comics. You only need to look to feel the atmosphere swallow you up. I felt like I was right there in the Daily Planet, because the art is the iconic style most of us have grown up with. Some of the panels have no dialogue and they are just as strong, if not more so than the ones that do. The brilliance is that Superman has fleeting moments (which DO look amazing) the stars are the real people and they don't look any less dynamic. Some of the panels have a little too much dialogue but that is down to the page count, I can't wait to see more. Absolutely FANTASTIC, I have goosebumps.
"No Justice: Prelude"

These teams have been formed to represent the cosmic energies that make up the universe: Entrophy, Mystery, Wonder and Wisdom the very energies the Cosmic Titans seek. Back on Earth Green Arrow and Supergirl await the news of the League's success but what they see instead of the return of heroes may be the end of everything...

I'm sure fans of Metal will be in awe but for me it was just big, loud and lacking is story. Perhaps following two very strong stories is why this one fails for me.

While it is nice to see Superman leading a team, the basis for the mission is left to monologue boxes so as I said, this was a bit dead behind the eyes. It doesn't mean I wont enjoy the miniseries, but this didn't flesh it out for me enough.

Art - 5: Jorge Jimenez doesn't hold back and his style really bursts off the page.

There is not one page or panel that is not filled with energy and I've always championed his transfixing style.

I cannot wait until we see the story unfold. As a story I felt this segment lacking but as a visual this was a masterclass in spectacle.

Cover Art - 5: A stunning cover but like the inside it doesn't give any one story the spotlight it deserves.

Great art but each segment makes you wish they were actually the fully fledged piece instead of combating for attention.

The Joker wins by a narrow margin but perhaps No Justice ought to be the focus.

Variant Cover Art - 5: There are three variants to choose from of varied quality. The weakest of the trio was the women of No Justice. It was a great showcase of the girls but the other covers were simply stronger. The Joker marrying Bruce and Selina is certainly eye catching and as bright and arresting as the story inside but of course there could only be one on top and Clark Kent's shirt rip had to be that one. Every one is a winner of course but this is too iconic not to be the favorite.