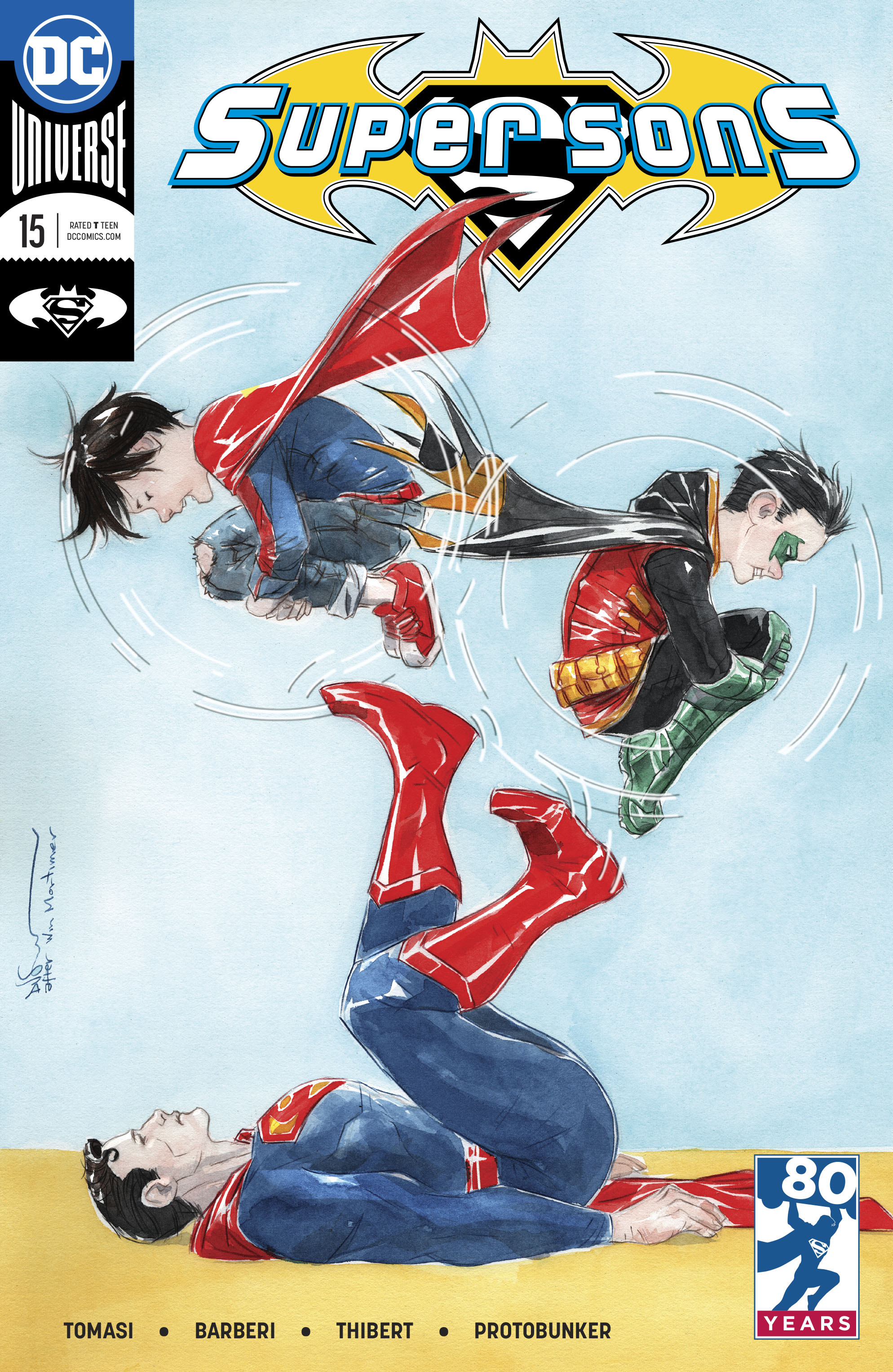 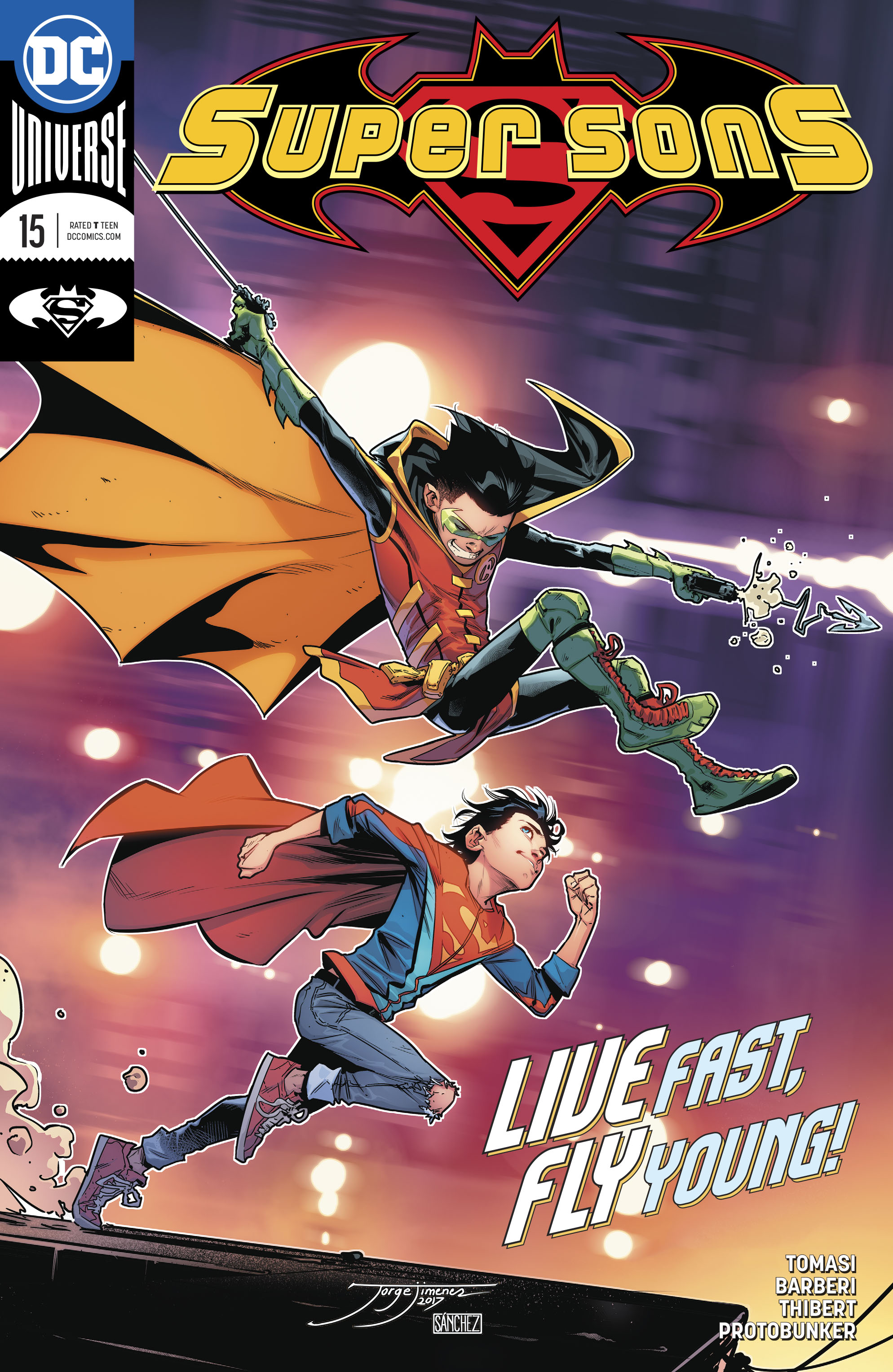 "End of Innocence" - Part One

Reviewed by: Keith Samra
Click to enlarge
We open with a couple of scientists from Lexcorp, who discover that their test subject has escaped.

We cut to the boys in their HQ at the bottom of Morrison Bay. Jon is eating noodles, while Damien is working out. The base is infiltrated by a familiar foe to the boys, Kid Amazo. The HQ starts to flood, the boys try to escape to the top of the bay, but Jon is pulled back down by Kid Amazo. Damien attempts to rescue Jon, but finds that he can't hold his breathe anymore, he almost doesn't make it to the top, when he is pulled out of the water by Cyborg. Jon is taken back to Kid Amazo's hideout, where he reveals to Jon that he doesn't need a human host anymore, but rather a Kryptonian Hybrid, who is much more resilient.

We end with the reveal that Kid Amazo has managed to capture the Justice League, and plans to siphon their powers, with Jon as his new host.

Story - 5: Tomasi manages to keep the quality of this book consistently high, even now, as it's drawing to an end. He is a continuity man, and works magic within it. Granted that most of it is his own from various books he is writing or written, but he's created a nice little pocket continuity for himself. Much like Jon Ostrander used to do, back in the 80s on the books he wrote.

That being said, I loved this issue a great deal. There was a good mix of fun, suspense and action. Which is something that has become standard for this book. Loved the "Sweet Christmas" line from one of the scientists at the start of the book, nice little nod to Luke Cage there.

As I stated before regarding Tomasi's continuity, this was an excellent call back to the first arc in this title. There was enough exposition to reveal what happened between issues in terms of Reggie's (Kid Amazo's) fate. With the story progressing naturally to the series finale. Absolutely loved Jon's reaction when he discovered that Kid Amazo may have killed Reggie, his previous host. He is definitely the son of Superman. Such compassion, Tomasi as usual had the characterization locked down.

Cyborg was a character I didn't expect to see in this issue, but then again, I didn't see the cliffhanger with the Justice League coming either. Even though it was foreshadowed, when Cyborg revealed that they were on a mission at a Deep Sea Oil Rig.

Really enjoyed the character progression with Kid Amazo, and that he intends Jon to be his next host. Kid Amazo is a nice combination of Parasite and Marvel's Venom.

Great issue, of a great series, looking forward to its conclusion next issue.

Art - 5: Carlo Barberi again graces us with his wonderful pencils. As I stated in previous months, he most likely will see the book through to its final issue, and editorial couldn't have found anyone better to replace Jorge Jimenez. His style is perfectly suited to this book and its two protagonists.

Kid Amazo looked as if he popped straight out of Jimenez pages, which was an awesome sight, as I absolutely loved Jorge's art on this book. Barberi has managed to step into those shoes and run with the ball with ease.

Loved Jon's constant fluttering about in the boys HQ. Especially loved the panel where he hovers out of the water, then blasts Kid Amazo with his heat vision.

The highlight for me this issue, was the underwater scenes, when Damien tries to get he and Jon to the top of Morrison Bay. There is a real sense of excitement and suspense in those scenes. Also liked Barberi's Cyborg too, he made him look like the tank that he is, and also made his new current look work. I haven't always been a fan of the characters design since the New 52, but Barberi made him look awesome.

Protobunker were on the color duties this month, and they gave it a very technicolor feel. Really enjoyed the underwater scenes. There was a sense of anxiety in the tone of those panels and pages.