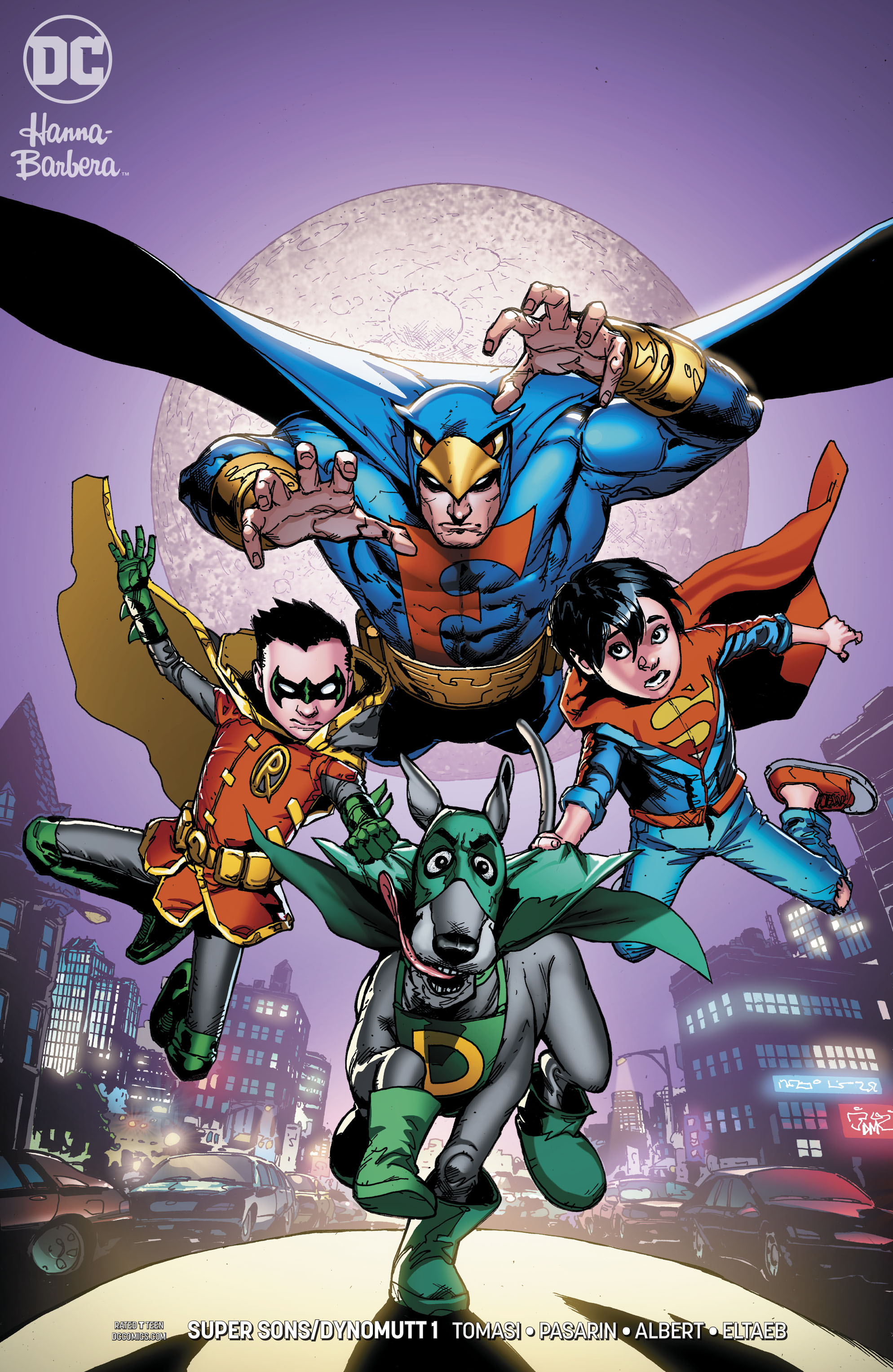 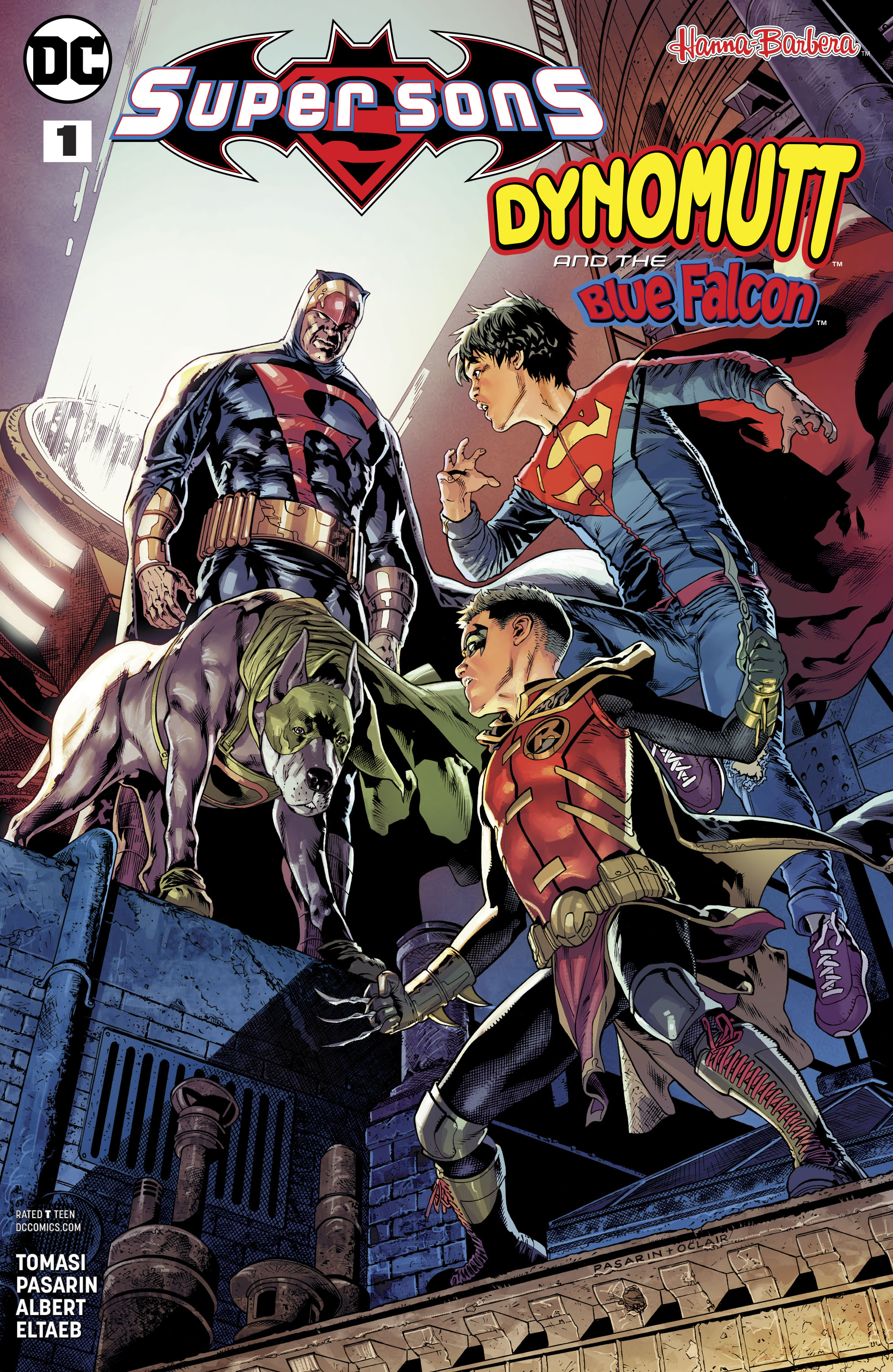 Reviewed by: Keith Samra
Click to enlarge
Our story begins years ago, as boy genius Radley Crowne tinkers in his lab. He is visited by his father who introduces him to his new best friend, a puppy named Mutt.

We watch as the years go by, and Radley and Mutt grow up together, until fifteen years later, Mutt is dying due to old age. Not wanting to part from his best friend, Radley has an idea that takes Mutt from a normal dog and transforms him into the cybernetic Dynomutt. Together he and Bradley become the crime fighting duo Dynomutt and the Blue Falcon of Big City.

We cut to present day, as Jon is at a funeral with his parents in Big City. Feeling a little uneasy, because of his lack of understanding about death and funerals, he steps outside to get some fresh air, where he is met by Robin. Gotham being a little too quiet for his taste, Robin tracked down Jon, and asks him to go on patrol with him in Big City. Just then, the boys are met by an injured Dynomutt, who reaches out to Damian for help.

The boys take him back to Dynomutt's and Blu Falcon's lair at Crowne Tower, where the automated systems begin repairs on Dynomutt. Dynomutt informs the boys that the Red Vulture has somehow taken over Blue Falcon's mind, and that he is a danger to himself and them. Just then, Jon is blasted from behind with a synthetic Kryptonite ray by none other than the Blue Falcon. He also manages to take down Robin, and escapes with Dynomutt's body.

Dynomutt manages to help the boys in a last ditch effort, by transferring data to Robin's wrist computer, and leading them to Red Vulture's lair.

Blue Falcon delivers Dynomutt to Red Vulture, who reveals that he was one of Radley's first experiments, energetically enhancing animals. Red Vulture escaped Radley, and by using his own superior intellect, is able to reverse engineer Radley's work, and creates himself a human/cybernetic hybrid body. With that body currently dying, he is attempting to transfer his consciousness into Dynomutt's own body, and become something even greater and menacing than before.

The boys arrive at the lair, and attempt to stop Red Vulture, but are met by Blue Falcon, who just about decimates them both.

As Red Vulture attempts to complete the transfer, he is met by resistance, Dynomutt's own consciousness fights Red Vulture's and manages to stop his mind from downloading into his body. Frustrated at his failure, Red Vulture orders Blue Falcon to kill the boys. He is confronted by Dynomutt who is able to snap him out of it, reminding him, that he is his Best Friend. Red Vulture shoots at Dynomutt to destroy him once and for all, but Blue Falcon intercepts the blast, and gives his own life to save his life long friend. Jon takes down Red Vulture, and Dynomutt lashes out to attack him, but is stopped by Robin, who reminds him that that is not what Blue Falcon would have wanted.

A little while later, we find ourselves at the funeral of Radley Crowne. Jon tells Damian that he now finally understands what funerals are really about, as a gathering of people who pay their respects to the deceased. Damian jokes to Jon, that he has a dark side, even though he is the one that is Batman's junior partner.

Much later we see Dynomutt digging up Radley's coffin, and take his dead body to Crowne Towers, which is Blue Falcon's secret headquarters. He speaks to Radley, telling him, that so many years ago, Radley told him that he was the only family he had left, and in that same respect, Dynomutt would also not let Radley go without a fight.

After hooking him up to machines, he is able to revive his best friend and crime fighting partner.

Story - 5: At no point did I ever expect this team up/one shot special to be as good and as intriguing as it was.

Tomasi has handled the Super Sons since before they even had their own title, so I don't need to go into specifics there, but I will mention his excellent handling of the Hanna Barbera characters. From the prelude in the opening pages, to the epilogue of Dynomutt bringing Blue Falcon back to life, Tomasi kept the tone very well balanced. He took some goofy concepts of a 40+ year property, and played it pretty straight, with some dark undertones, but never falling into the "gritty and dark is best" trap.

He captured the friendship and family aspect of Blue Falcon and Dynomutt without any hiccups, and left it open, and me personally actually wanting more.

I would love to read a mini series or even an ongoing featuring this duo.

I can't not mention the boys however, as I said before, Tomasi has handled their adventures from the beginning, so they already have a well balanced stable partnership. Damian still may be brash and cocky, but he now has a more respectful attitude toward Jon as well as his other allies, as evident with the way he treated Dynomutt and spoke about Blue Falcon. I must say, I enjoy reading his exploits very much now, than I ever did before.

Jon coming to terms with the concept of death is another small but important aspect of his ongoing journey to living up to, and one day becoming Superman.

I've said it before, Damian and Jon may have been created by Grant Morrison and Dan Jurgens, But Tomasi has actually nurtured and helped them both grow into the beloved characters they are today.

Lastly I want to end with saying that even though their was super heroics and science fiction elements in this book, it really was just about a boy and his dog, and a wonderful take on a decades old property that amazed the youth of its day, and the audience of the present. Well done Mr Tomasi.

Art - 5: I have always been a fan of Fernando Pasarin's art, and I loved his serious take on this issue. His style was a perfect marriage with the story that Tomasi wrote.

Loved the realistic vibe that he bought to it, and the detail he put in on Dynomutt's circuits and cybernetics.

The page with the credits, where Damian is crouching above Jon on a tree branch is nothing short of spectacular. This by far is my favorite page in this issue, as it sets the moodiness that is Damian's moniker. I also love the panel a few pages later, where Jon rips his shirt open to reveal his "Super Suit". Not since Tom Grummet's "Superboy" have I felt someone capture a youthful expression of Superman in such a way. Even though Jon is Clark's son, I like how Pasarin made him look like a younger version of his father, he was able to capture the family resemblance perfectly.

Pasarin's Blue falcon is also very impressive, with his large and wide "Mr Olympia" build, he manages to bring to life the larger than life animated look of the Blue Falcon.

Even the Red Vulture looked menacing with a touch of creepy.

I hate to use the word epic lightly, but that's the only way I can describe the way this issue is drawn.

Last but very not least, the colors. Gabe Altaeb uses his palette well, bring a dark yet technicolor vibe to it. Digital coloring at its best.

Cover Art - 5: Love this cover. So well drawn and so very striking. Really love how the composition is, and how the coloring really sets the mood.

Variant Cover Art - 3: Though I like the composition, I'm not a fan of how it is drawn. Blue Falcon looks really detailed and serious, but the boys and Dynomutt look quite cartoonish.