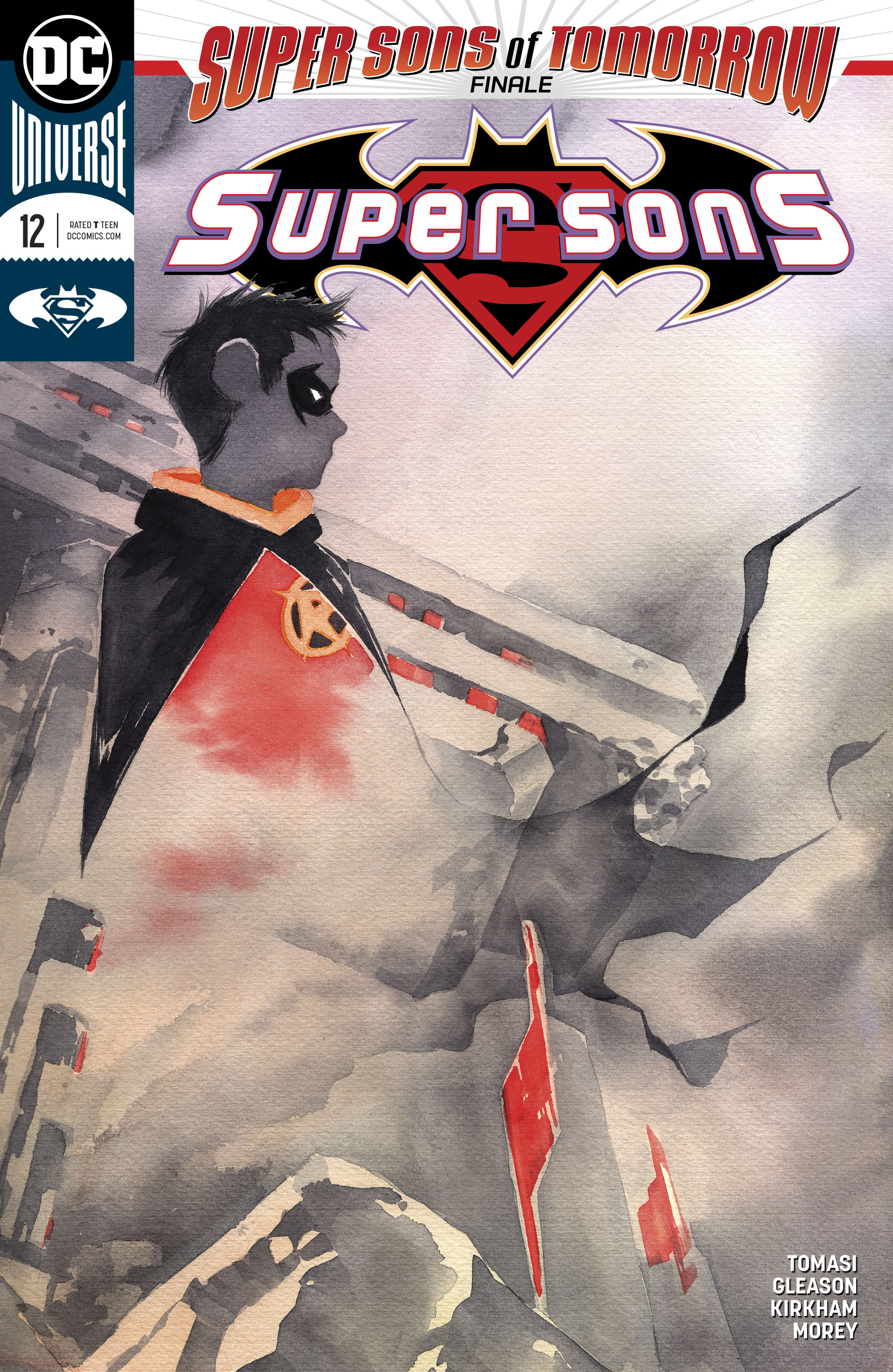 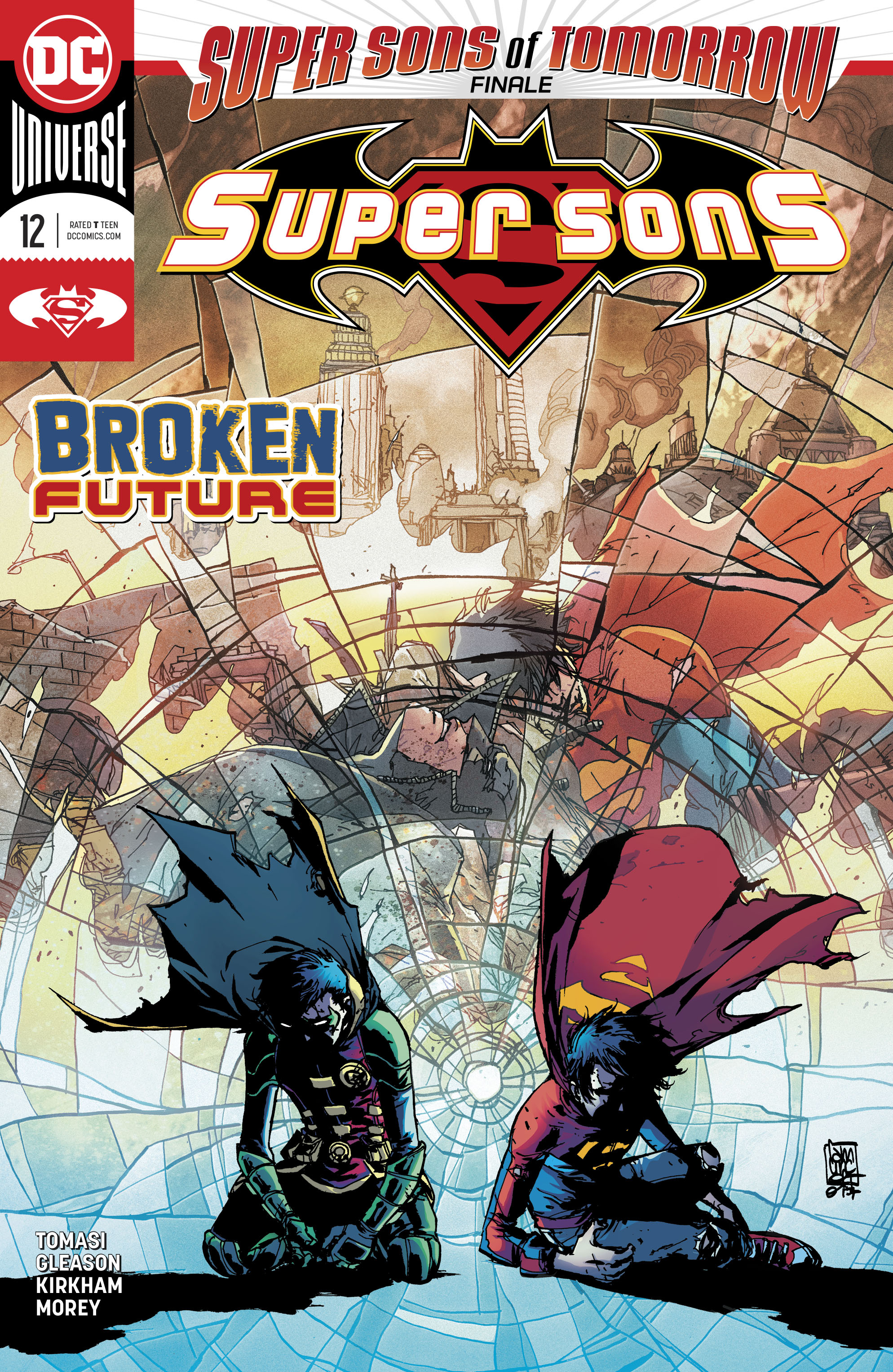 Reviewed by: Keith Samra
Click to enlarge
Picking up from the pages of Superman, the Teen Titans, Future Titans and Superman watch as Tim Drake/Savior is sucked into the Multiverse.

Superman and the Teen Titans question the three future Titans on who they are. To which Conner replies, "You don't know me yet, but you once told me when it comes to time-travel and alternate realities, the less you know, the better".

Conner, Cassie and Bart return to their time, by Bart using the Speed Force. Kid Flash gets reprimanded by Raven for taking a selfie. Superman takes Jon and Damien into the Fortress with him to talk. He tells them both that he is having doubts about the two of them continuing to fight crime together, seeing as how in the future, because of Damien, Jon loses control and causes a disaster, the one which Tim Drake came back to prevent.

Jon and Damien convince Superman that they are stronger together as partners, than they are apart. This way they can watch each other's backs. They meet up with the Teen Titans outside the Fortress and Superman has everyone teleported to the Justice League satellite base, allowing the Teen Titans to use it as a temporary base until theirs is repaired.

Damien casts a vote to include Jon as a part time Teen Titan, and then be given a full time membership once he turns 13. The Titans vote against it, and Jon sadly walks away. Damien joins him, and the two talk and reaffirm their friendship.

Story - 3: As good as this story started, it seemed to fizzle out during its conclusion.

I had enjoyed this story from the start, but as it came to its conclusion, it seemed to have less impact.

Conner, Cassie and Bart seemed to be really wasted, as they didn't have much to do at all. Turns out that they are more likely to be part of an alternate reality, than mainstays of the DCU anymore. Though Beast Boy saying he thinks he knew Cassie manages to keep the spark alive that these characters may get some form of spotlight and inclusion into the DCU in a future time. I really don't like that these characters have been shelved in such a way, when before New 52, they were integral parts to the DCU.

Damien felt a little out of character, especially calling Superman "Sir" and "Mr Kent". The brash young bat-boy showing so much respect all of a sudden was a little jarring, but Tomasi has been writing this character for a long time, so I will trust that he has a plan for him.

Jon being unable to control the Solar Flare power due to his human DNA is an intriguing idea, I hope that this is explored in future issues. Geoff Johns did a great job in introducing that power, so I hope that Jon can have just as interesting an affect as his father.

Art - 4: A little bit disappointed that we didn't have Jorge Jimenez art again this month, I really hope that he will continue on with this title as its regular artist for a while at least.

Tyler Kirkham was a wonderful guest artist though. This was one of his better issues, as I feel that he managed to capture the size and stature of each character quite well. Superman looked powerful and larger than all the rest, Jon and Damien looked like young boys, and the Teen Titans didn't look like they were adults shrunken down.

I particularly liked the shading effects Kirkham did on both Bart and Wally's costumes.

The one page that we saw Tim Drake/Savior as he entered the Multiverse, was a lot better than the previous books portrayed him. He looked like someone that had grown to become Batman.

The art was perfectly fine this issue, but there wasn't much story for Kirkham to actually work with, so it seemed rather a boring and slow paced issue.

The colors by Tomeu Morey seemed very muted, they suited the tone of the issue, but nothing really leaped out and grabbed my attention.

Cover Art - 5: I really liked the composition of this cover, the fractured future and the boys sunken in defeat made me want to know what was going to possibly happen. Inking is a little heavy, but that's just nit picking.

Variant Cover Art - 5: Though it doesn't really portray what happened in this issue, this cover by Dustin Nguyen is simply awesome.