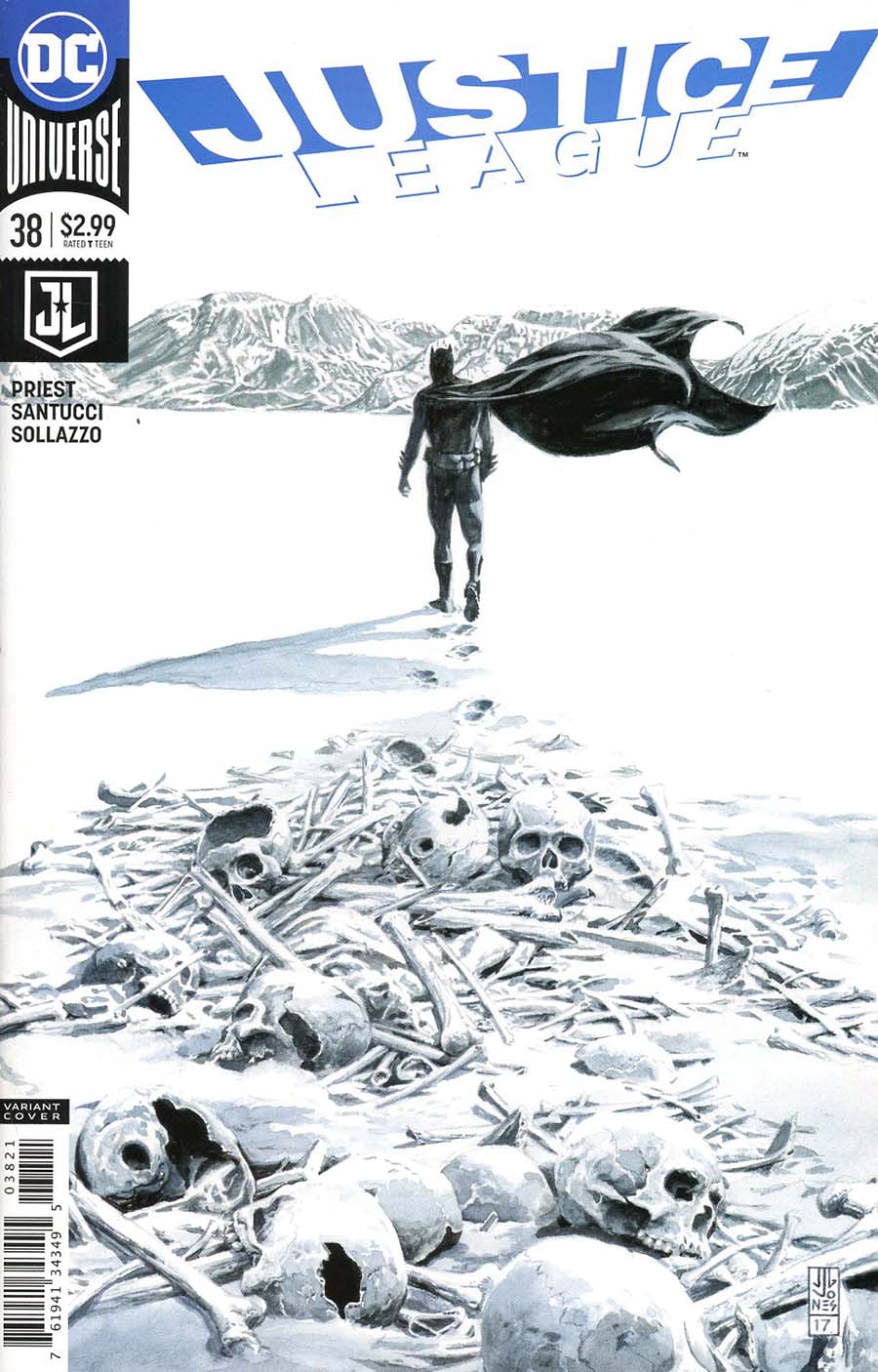 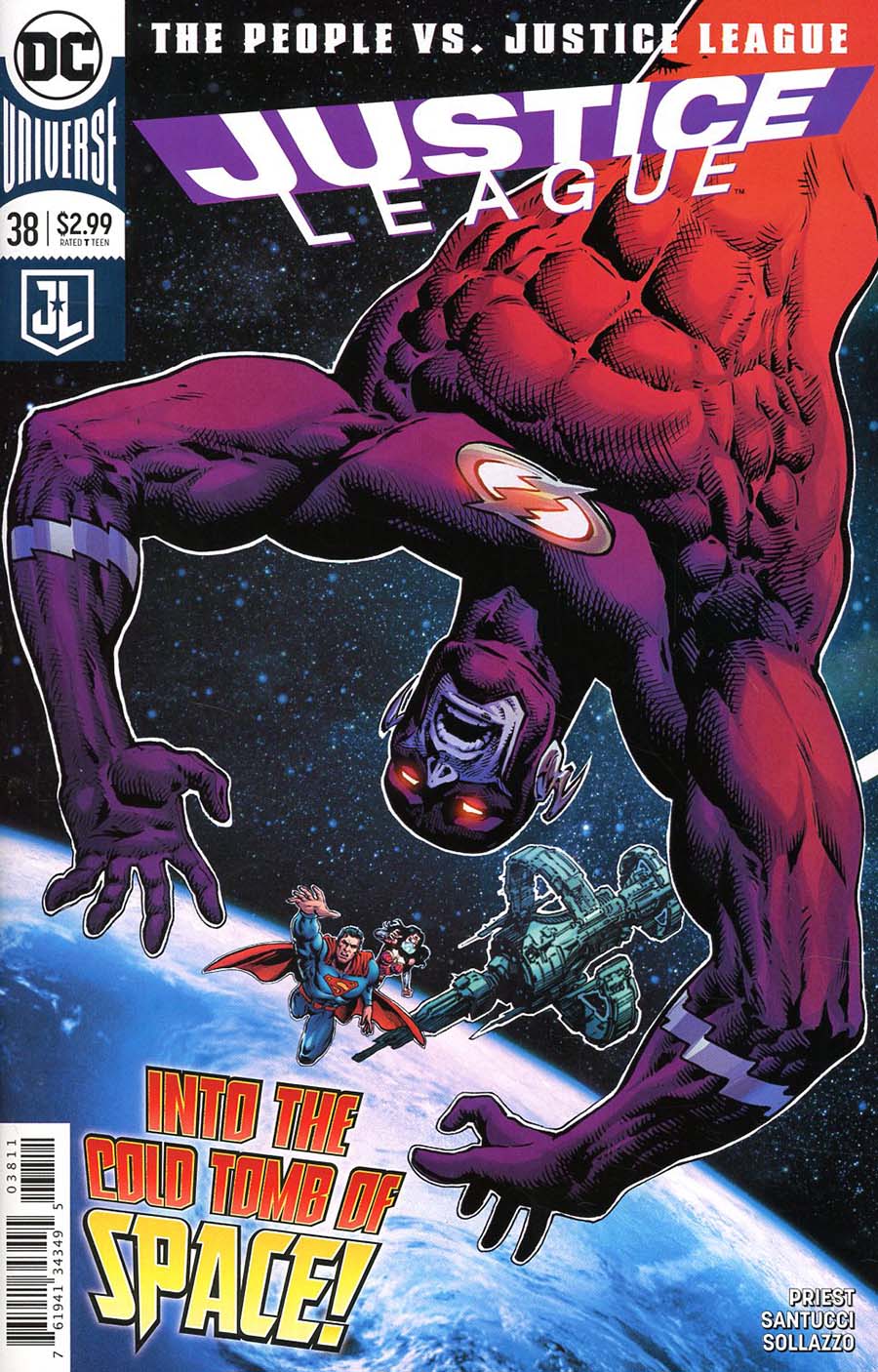 Scheduled to arrive in stores: February 7, 2018

"The People vs Justice League" - Part 5

The Justice League has been scattered across the globe thanks to The Fan and his infiltration and manipulation of the Watchtower. As the scattered members reunite Barry is attempting to rid the Watchtower of any trace of The Fan's meddling. A group of members meet to decide who should speak to Batman about stepping down as leader. Clark asks, "Who would even want the job?" Back at the Tower a Tech Support team from LexCorp come to aid Barry but things go wrong, and Barry has to make a daring rescue in space that nearly costs him his own life. Clark and Bruce appear to have the "talk" as Bruce says, "Fine, I'll take a few weeks then we'll talk". As he walks off Jessica catches up to him to console him and ends up kissing him romantically? Bruce grabs his gear and as he is about to leave he invokes his right to elect his successor, and chooses Cyborg.

Next: A New Leader?!

Story - 4: This is great storytelling. It wasn't until my reflection on the book that I became aware that the antagonist, The Fan, is not even in this issue. Rather the story focuses on the eternal struggles of how Batman's pride costs the team a crucial error and the actions of one obsessed fan is causing havoc in the solidarity of the team. Not only with Bruce, but Baz makes the point, there is the Trinity, add in Barry, then there is the rest of the "Minor League". My only complaint, and what kept this from being a solid perfect 5 Shields was, we were not given the confrontational "Talk" between Clark and Bruce. Instead we are left to a before and after scene, for me, this was something I was looking forward to.

For those that are not following Batman, recently in his solo book, he has proposed to Selina Kyle (aka Catwoman) and she said yes, and since then Bruce has locked lips with Diana in his Batman title and now Jessica in this very issue, interesting to say the say the least. Also the choice of Cyborg is an interesting choice. I can't help but think it's due to recent announcements of new Justice League teams after the conclusion of the "No Justice" story event. Did Bruce throw the first stone by not picking either Clark or Diana? Either way, this is the best the Justice League has been in a very long time.

Art - 4: The art on this book is very solid. The colors almost give the book a painted look which I enjoy a lot. The details while Barry is running seem to pop in this issue. As well as the characters themselves. A completely different style from last issue, but another artist I would not mind sticking around for an extended run on this title. Speaking of which 5 issues in this story arc and already 3 different artists. Reading it every two weeks most people probably don't notice or care, but let's be real, these books are written in a way to make trades and changing artists like this, especially with completely different styles, might hurt the overall flow in the trade. However I feel this story is strong enough to overlook that. We shall have to wait and see.

Cover Art - 4: Nice looking cover. Visually it shows the fear on Barry's face as he is being swept out in space (this actually happened). However showing Clark and Diana attempting to rescue him did not actually happen. To those that have been reading my reviews, you know by now that I enjoy covers that represent what one can expect inside the book, and since this was beautiful but misleading it got a 4 and not a 5.

Variant Cover Art - 5: Before I get hammered with, "What about your previous statement?", I find that this cover metaphorically depicts Bruce walking away from the potential demise of the Justice League as we know it. With six visible skulls and a couple more that were not, I tried to see if the six visible depicted the remaining six members but other than the skull in the lower right corner, nothing seemed to stand out. However there is no denying that this cover is stunning.