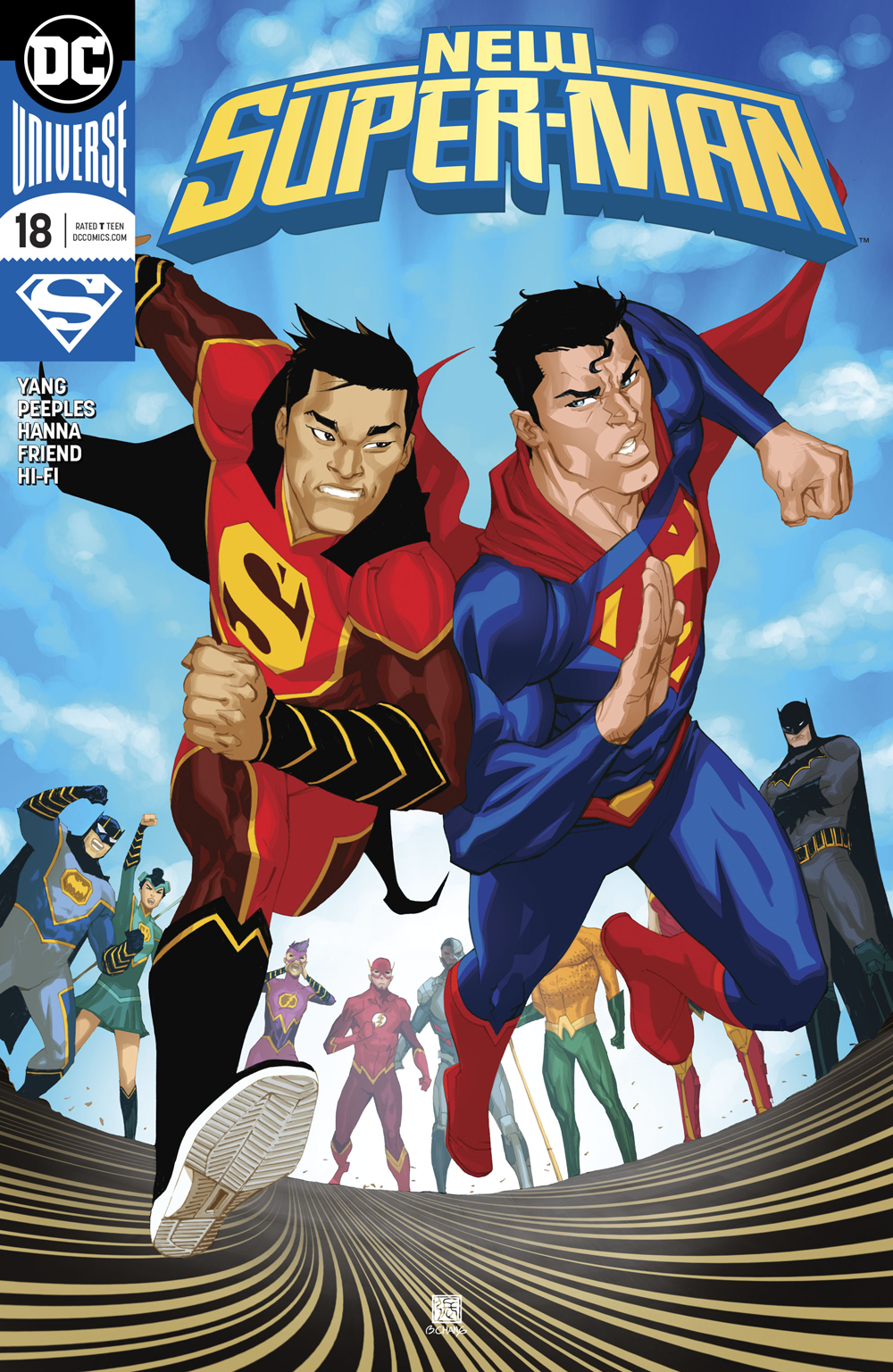 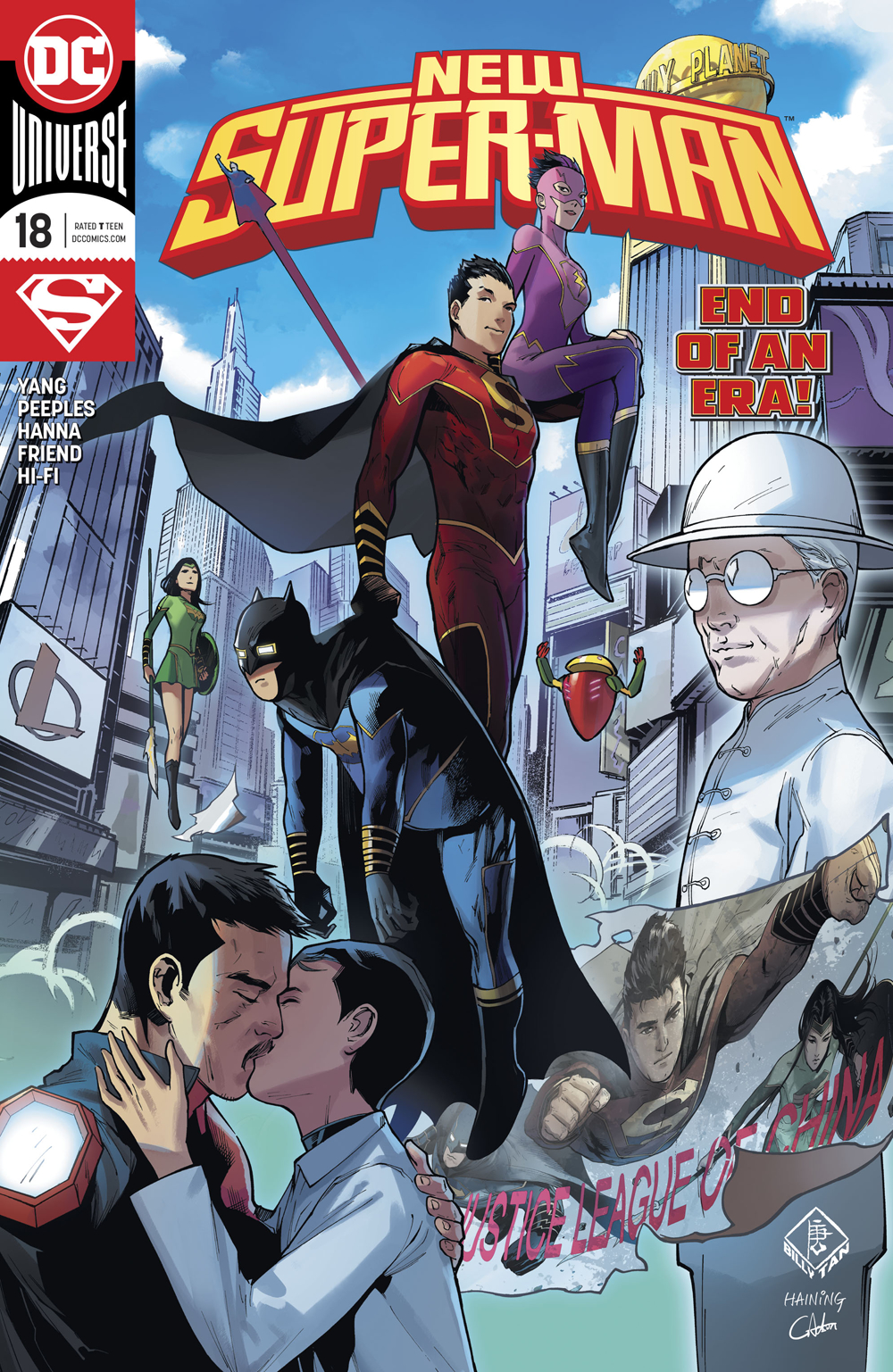 Lex, Superman, and Robinbot are still trapped in the forcefield outside of Luthor's mansion. Lex suits up and attempts to punch through the shield before a demigod bursts through the roof of his mansion. The forcefield vanishes as Superman flies Lex to safety. Kenan works to take down the Asura as Superman returns to help. Ice breath seems to work in weakening the demigod, but when Superman tries, the Man of Steel's power is turned against him. Unfazed by their attacks, an army of three demigods make their way to the heart of Metropolis led by All-Yang.

The JLC and the Justice League engage in a battle against the Asura. None of their attacks seem to be working. Remembering the words of Master I-Ching, Kenan has Baixi cover for him so he can meditate. As Kenan enters the space in between what is and what is not, he discovers that I-Ching is truly dead. The spirit of I-Ching tells Kenan the story of two brothers who were polar opposites of each other - the physical embodiments of yin and yang. One day, they were instructed to master a bit of each other's ways. While one brother agreed, the other refused vehemently. Master I-Ching reveals that he and All-Yang were the two brothers. Because his brother refused to complete his training, it fell to I-Ching to embody both yin and yang. I-Ching passes the mantle on to Kenan. This causes Kenan's symbol to change.

Kenan's meditation is disrupted as Baixi prevents him from being killed. With his new knowledge and completely unlocked abilities, Kenan figures out how to stop the Asura attack. Because he is the embodiment of yin and yang, super and man, he should be able to tap into one side of himself momentarily. As he taps into his human side, the portal opened by the red jade dragon closes. With the portal closed the Leagues are able to take down the Asura. All-Yang appears to a weakened Kenan. Before Kenan is hit by a blast of All-Yang's heat vision, Superman zips in to shield the young hero. All-Yang's blast weakens Superman as Kenan gets his second wind. Super-Man tells All-Yang that he is not an enemy, but instead an alternate part of him. This causes All-Yang to be absorbed into Kenan's chest.

With the JLC back in China, Kenan confronts his parents. He and the rest of the JLC are leaving the Ministry of Self-Reliance. Dr. Omen is furious, but is powerless to stop her son as Baixi tampered with any means of her stopping him. Zhongdan wants Kenan and his friends to join his cause, but Kenan refuses. As Kenan leaves, a trio of Ministry manufactured Green Lanterns arrive.

Story - 5: Talk about payoff! Every story thread that Yang presented has been tied up. If the series were to end right here, I would be 100% satisfied. Not only does this issue complete an 18 issue story, but it also completes one of the most masterful character arcs I've seen in comics in a long time. Kenan has gone from a punk kid to a true hero. Mixing in perfect amounts of comic book fantasy and Chinese culture, Yang has created one of my favorite new DC characters. If I'm not mistaken, the title of this book is to change to New Super-Man and the Justice League of China beginning next issue. I'm intrigued to see where this book is going to go. Hopefully, we'll get some more team-ups with the Justice League and the JLC. They work well together. If not, I fully expect more Superman/Super-Man team-ups.

Art - 4: The art in this book is almost perfect. There are a few panels that could have used a little more work, but they aren't as plentiful as the fantastic panels. The part of this issue I'm most excited to talk about is Kenan's new symbol. It's just so cool! I liked his symbol before, but this new one blows that one out of the water. I simply adore that last splash page of the JLC. That's how you end an issue of this caliber.

Cover Art - 3: This cover is fine. It doesn't particularly have anything to do with anything that goes on in the issue, but it's not deceptive, either. All of the characters appear in the book, but that's about it. That aside, it's well-drawn and inked nicely. The unamused look on Baixi's face is hilarious.

Variant Cover Art - 4: Whoa! A Bernard Chang variant I actually like! I still have a problem with the way that Chang's faces come out, but I love the colors and the idea.