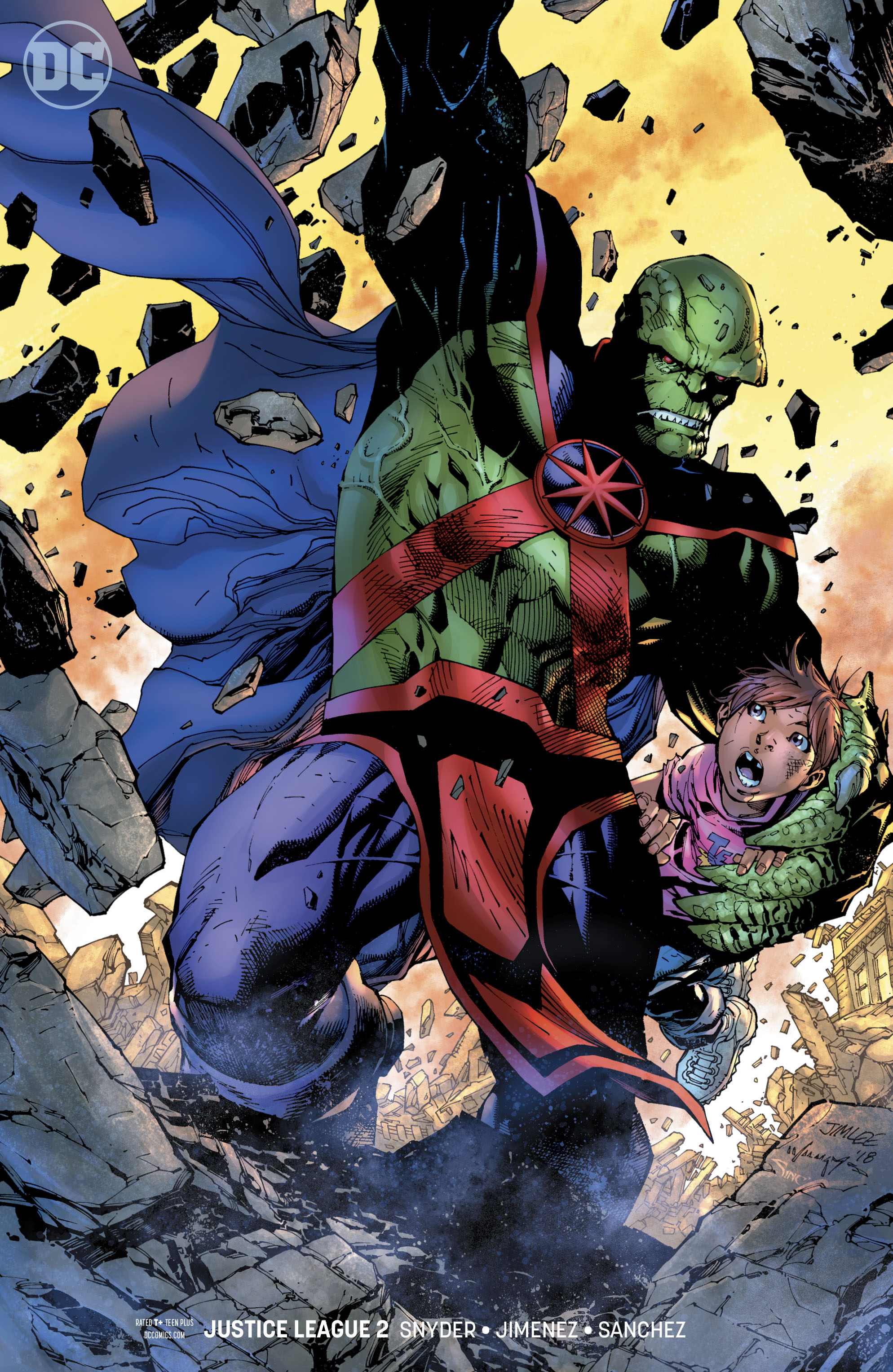 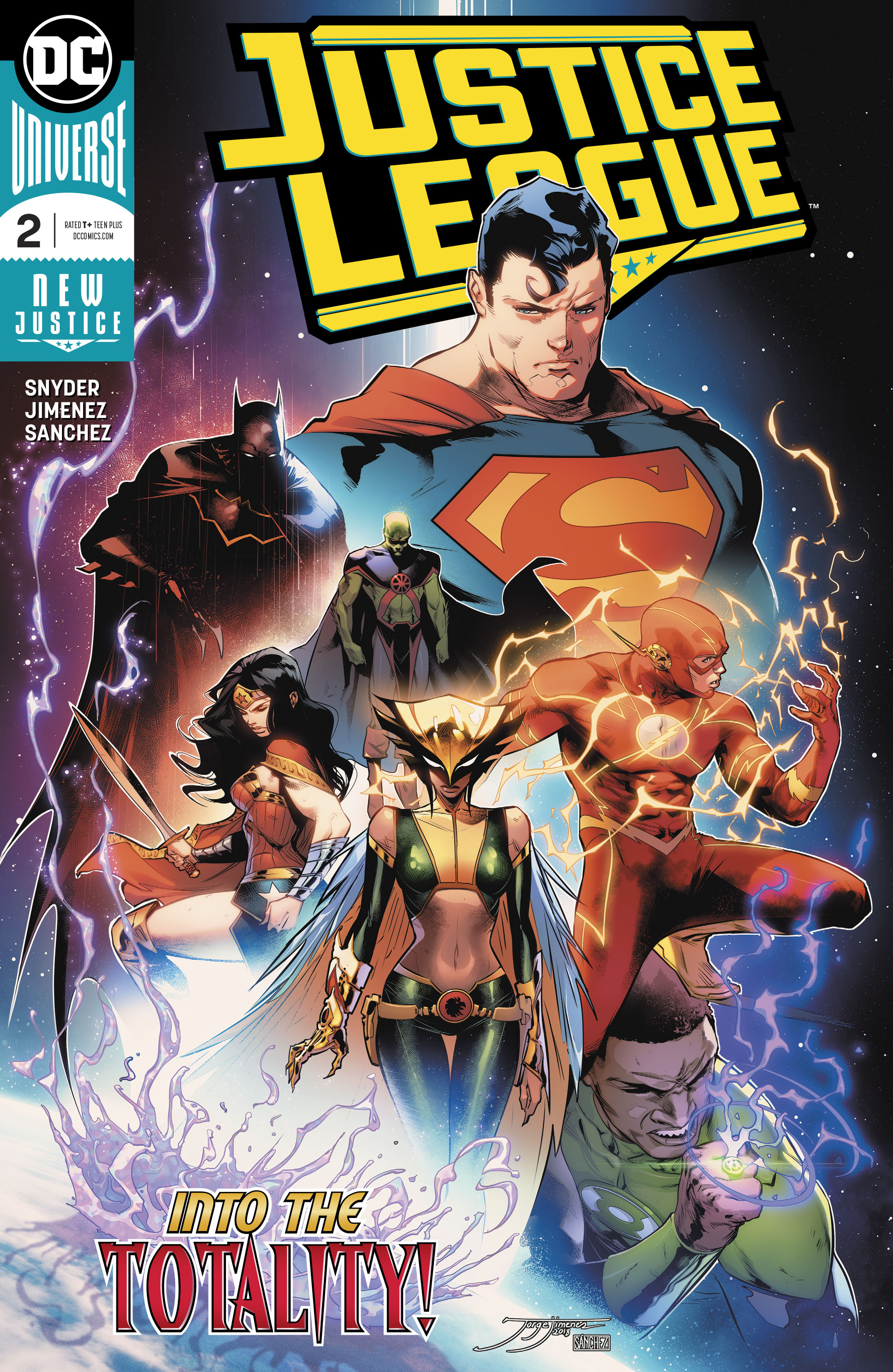 Reviewed by: James Lantz
Click to enlarge
This issue literally starts out with a bang as Lex Luthor blows up Chapter 3675 of the Kansas West Legionnaires Club. Meanwhile, Swamp Thing is helping Batman contact Green Lantern John Stewart. They need his help with the Totality. Hal Jordan is dealing with the Source Wall, and the rest of the team must battle Killer Croc, who was mutated into an oxidized Kryptonite spewing refugee from Jurassic Park. The Flash's Speed Force powers cut out on him in the middle of the fight. However, Martian Manhunter, Wonder Woman, Hawkgirl and Batman are able to defeat Croc. Yet, the Justice League will need to take action against the Totality. Without John Stewart to aid them, they'll most certainly have their work cut out for them.

As the Justice League tries to figure out a strategy for the Totality, Lex Luthor's Legion of Doom is plotting to control seven hidden forces in the universe including the Speed and Still Forces, the latter of which is used by the Flash's old foe Turtle to prevent the Scarlet Speedster from running. Sinestro, in the meantime, has unlocked the invisible emotional spectrum, and he's using it to capture John Stewart. The Justice League is definitely going to need to plan for so much more if a Green Lantern like John Stewart has been taken prisoner.

With Batman and Hawkgirl miniaturized in special vehicles inside the cells of an armored Superman and Martian Manhunter for extra protection, the Justice League is ready to confront the giant face in the Nevada Desert that is the Totality. Unbeknownst to the extraterrestrial superheroes, Lex Luthor is hidden in a celaphic vein. The rest of the Justice League may not be able assist their allies. A new group called the Ultraviolet Corps invades the Hall of Justice, and among their numbers is none other than John Stewart.

Story - 4: The story itself is better than that of #1 in spite of being a bit sluggish in spots, and some dialogue merits a face palm. I'm left with a lot of questions, which is good. How did Lex get that baby? Is the Flash's car a preview of DC's next line up of collectibles and toys? (Kidding sort of) Will we see more of the Legion of Doom's ranks take revenge in such an intense manner as Sinestro did with John Stewart? How did Lex hide in Superman's vein without Batman and Ray Palmer noticing? Does Lex even care if he was spotted by the Justice League? I'm sticking around for the answers to those inquiries and more.

There are a lot of great character moments in the first two issues, but if you are a Lex Luthor fan, this book is for you. Lex not only steals the spotlight, he pulls the rug out from under the rest of the Legion of Doom and the Justice League while swiping it. He's mainly in the beginning and the end, but he's written in this comic to be perhaps the most important villain of this chapter.

In the end, despite some bumps along the way, Scott Snyder has written a story that is nearly worthy of many of his predecessors on Justice League. I'm still not a big fan of his work, but I could come around with this series.

Art - 3: While not as bad as the first issue's art, this one still feels like it was rushed, and panels look off on some pages. Perhaps, Jorge Jimenez needs to find his rhythm with this series, or maybe DC should put this title out monthly instead of on a bi-weekly schedule in order for artists to do their jobs well.

Cover Art - 1: What is this cover trying to convey? It looks more photoshopped from interior images rather than something that was actually drawn.

Variant Cover Art - 1: Jim Lee is normally a good artist, but this cover just looks awful. Even a great artist like Lee can draw an ugly image, and this one is horrid.