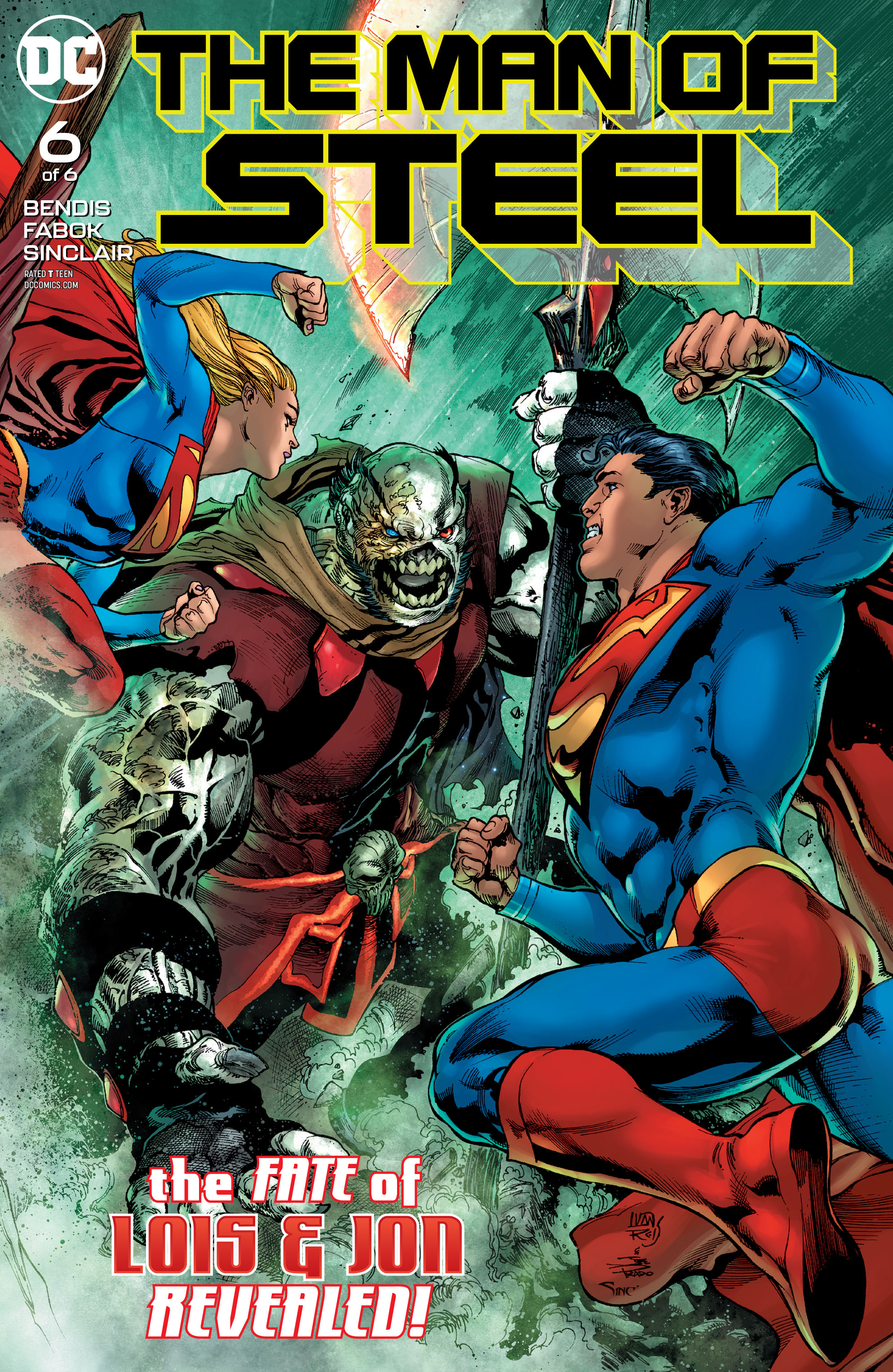 Reviewed by: Keith Samra
Click to enlarge
We open with a look into the past, as Clark and Lois argue with Jor-El over his wanting to take to Jon with him across the galaxy. With Jon revealing that he wants to be better, as he was rejected by the Teen Titans, for his not being old enough yet, but the haunting fact that he wont be able to control his powers in the future and cause a catastrophe, killing many in the process (see Super Sons comic for more).

We catch up to the present, where Superman confronts Rogol Zaar at the Earth's core, and manages to throw him aside, stealing his device, set to destroy the Earth, and flying it into space.

Back in the past, Lois tells Clark that she will accompany Jon, as he travels with his grandfather across the galaxy. Jor-El promises to bring his son's family back to him, and gives him a device, so that he can contact them whenever he may need to.

In the present, Rogol catches up with Superman in space, but isn't fast enough as Superman sends the device further along, and stops Rogol from making contact with it. He is soon joined by Supergirl, who tackles him, separating him from his axe, thus eliminating much of his power. Supergirl uses the Phantom Zone Projector and sends Rogol to the living death of the prison dimension. They are soon joined by Green Lantern, who takes the world destroying device into his custody, leaving Superman holding Rogol's axe, and with very little answers to his questions. Later in the Arctic, Superman and Supergirl are joined by the Justice League, as they bid farewell to all the fallen Kandorians.

We look back into the past, where Clark is torn over the decision that his family has made, which will leave him alone on Earth until they return. He gives Lois his Superman suit, saying that it may prove useful out in space, and he will find another one in the meantime. As Jon and Lois prepare to leave, Jon hugs his father, and Lois whispers something into Clark's ear, to which he replies, "Well, then hurry home". They board Jor-El's ship, and say their goodbyes, as the ship disappears in the same fashion that it once appeared. Afterward, a lonely Clark enters Jon's room, sits on the floor, leaning against the wall, holding Jon's childhood stuffed toy.

We end at the Metropolis Fire House, where a young man approaches Fire Chief Melody Moore, and tells her that he knows who has been setting the city on fire...

Story - 4: A lackluster finish to a much hyped series, Man of Steel finished a little flat after leaping high with its opening issues. Though it is very well written on duel timelines, the lack of resolve, and the battle between Superman and Rogol didn't quite pay off.

However, in saying that, this series served as a pilot to the now upcoming Bendis run on both Superman and Action Comics, so it sets up the obvious direction he wants to take the character.

So what does this mean? On the one hand, it left me unsatisfied, but on the other, it has set a course, to which I would want to know the destination of after this journey.

It is very hard to put into words, but I think this is a series that definitely will need revisiting in the future, as right now, I am rather conflicted on it.

Let me get one thing straight though, this in no way is because of the direction Bendis is headed, it is simply my feelings to this last issue of a series that fell short of a fulfilling ending. There was no real resolve as to Rogol Zaar's story, or his motives and vendetta against Kryptonians. We learned very little, save the last page, as to who the arsonist is, setting fire to Metropolis tenements. And lastly, what the purpose of introducing Robinson Goode in the prelude to this series, and then barely doing anything with her.

The saving grace was the story about the Kents, that has slowly unfolded over the last few weeks. It was a relief to learn that Bendis isn't splitting up the family unit, but rather seeing Lois and Jon off for an intergalactic excursion, with "Grandpa El". Jon's reason for wanting to go is revealed, and I love that Bendis has picked up this particular plot thread from Tomasi's Superman and Super Sons run. Jon is scared that one day he may lose control of his powers and kill millions.

Bendis has always been a good character writer, and he put so much emotion into Clark, as he watched his family leave, and the absolute loneliness in the solitude of his now empty home. This was a very heartbreaking scene, as was reading that Jon fears one day his powers will be out of control, and the cause of many innocents loosing their lives one day.

As mentioned over the last few weeks, Bendis has a good handle on Superman's voice, and has also shown us that he understands and portrays Lois and Jon with the same love and respect that Jurgens and Tomasi gave them during their run. I want to extend that same compliment to the rest of the supporting cast, from the Daily Planet staff to the Justice League. Even Supergirl was a nice surprise, the way he portrayed her. The scene of the funeral for the dead Kandorians was touching and respectful. Much better than what they did with them on the World of New Krypton series a decade or so ago.

Lastly, as a series as a whole, this story could have been told the very same way, but in the regular titles, and still could have been named "Man of Steel". It seems like it was a bit of an ego trip, not necessarily Bendis, but maybe a choice made by the editorial offices. Most likely to cash in on Bendis' superstar status as a comic book creator. It seems as though they were trying to emulate John Byrne's 1986 Man of Steel series, but didn't quite capture the purpose that that one initially did. But like I said, this is a pilot to the "Bendis Era," so maybe looking back at it at a later date could be a little more favorable. My last thought on it is, I did enjoy it, but it didn't live up to the hype as it concluded.

Art - 5: Finally we get to the Jason Fabok rendered chapter, and he sure as hell didn't disappoint. We have gotten to see his art throughout these six issues, mainly tackling the Lois and Jon story, and he is a high enough caliber artist to keep the drama and excitement fresh, and the pay off was well worth the wait.

Starting with the way Fabok handled Superman, he drew him strong, confident and regal. All aspects that many of the great Superman artists have done so over the years. Fabok manages to give Superman a classic feel, whilst keeping him contemporary at the same time. There are shades of Curt Swann, John Byrne, Dan Jurgens and Jim Lee in the way he makes him look, hell I'll even say that there is a strong resemblance to Henry Cavill also. Remember I'm an art guy, and at times I look into things too much. But I enjoyed Fabok's Superman. Two panels that really stood out to me were, firstly when he confronts Rogol Zaar at the Earth's core, and secondly when he flies the machine out into space. I had to stop and look at those panels, and play around with the size of them on the screen, so I could study the detail. Also I had to make a special note of the panel where he is floating above Rogol Zaar, with his arms crossed. It reminded me of Christopher Reeve's line from Superman II, "General... would you care to step outside?".

Though there wasn't very much of it, Fabok delivered on the action. The fight Superman has with Rogol Zaar bordered on the line of being almost epic. The reason why it isn't, was because there wasn't much of it sadly. I was really expecting a bigger showdown between the two.

I enjoyed Fabok's take on the Justice League, and loved that he drew them wearing woolly parkas, from the harsh cold of the arctic. Even though Green Lantern, Aquaman and Wonder Woman most likely didn't need them, by having them be in them, it made both our Kryptonian heroes look that much more powerful.

As I stated before, we have seen the Jon, Lois and Jor-El scenes throughout this series rendered by Fabok, and he really has a strong handle on the Kent family, but he also has the Mr Oz version of Jor-El down too. I hadn't really taken notice before, but this look that Jor-El is sporting is a healthy mix of many different interpretations of the character over the last 80 years. And this is a design that was established in Dan Jurgens' recent run. So I appreciated that Fabok was able to highlight such a thing.

As usual, I had made a note to always mention Alex Sinclair's coloring of this series, and I can't leave this last issue without giving the man his dues. Sinclair bought a very warm feeling to all the Kent family scenes, while the battle went from the searing heat of the Earth's core, to the cold vacuum of space. Sinclair managed to keep this series connected on the art side in a big way with just the colors, and I feel sometimes he and other colorists are over looked for what they actually bring to the page.

Lastly, as I did with the story aspect of things throughout this series, my views on the art are a little mixed. I love all the artists that participated in this series. Steve Rude and Kevin Maguire I have been a huge fan of over the years, and it was good to see Evan Shaner and Ryan Sook tackle a Superman story. And of course Adam Hughes, who I felt so bad for last issue on the review, as I could not give him a perfect score.

My personal feeling is that for a six issue mini series, it may have gone down better with having one solid team on the art, to keep it consistent and also give it a more event like feel. Multiple artists hurt the over all intention of this series, but I did enjoy the art throughout, so this is a nit pick over criticism.

Cover Art - 5: The covers have been superb for this series. Even though I don't like the character of Rogol Zaar very much, I can't give this cover a lower grade because of it.