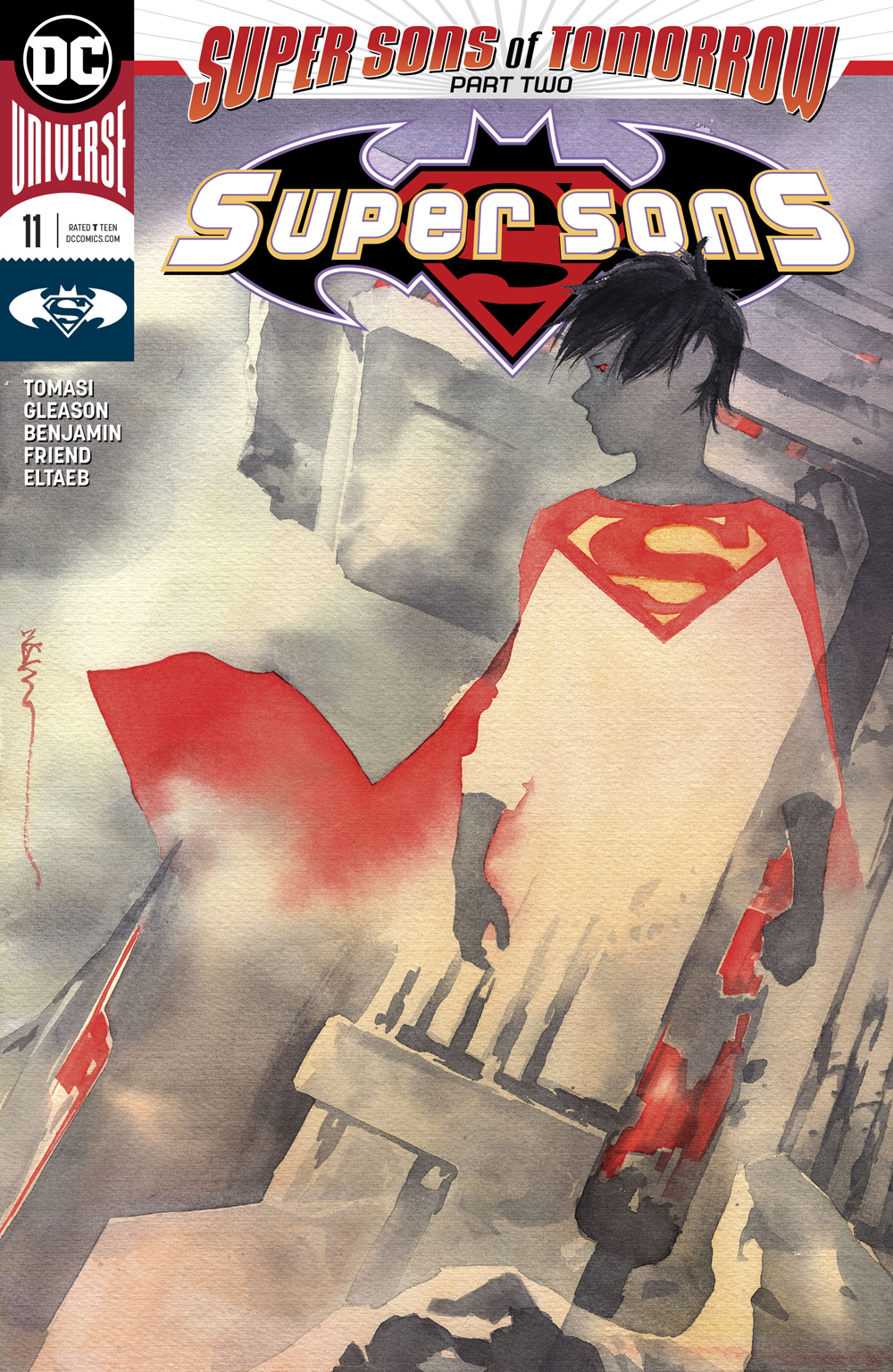 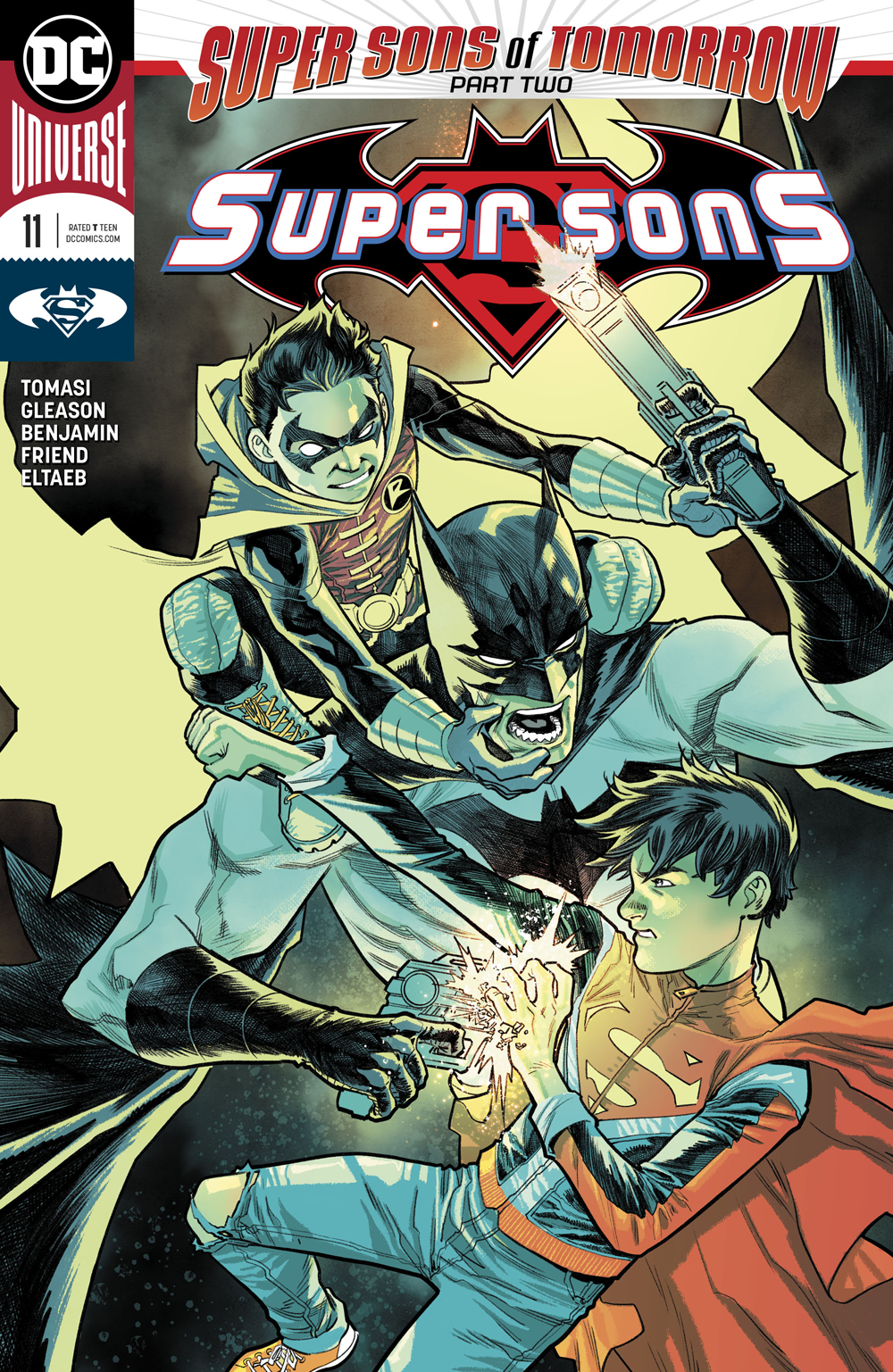 Reviewed by: Keith Samra
Click to enlarge
[Before you read this, please make sure to read Part One of this crossover in Superman #37, and come right back here and read Adam Dechanel's review of it.]

After the events in Gotham (Superman #37), Tim Drake/Batman has made his way to Metropolis, to the home of the Kents. Lois is on the phone to Cathy from Hamilton County, who has asked to talk with Jon. Jon however is not in his room sleeping as his mother thinks he is.

After the battle, the team tries to figure out who took out who, when Robin discovers that they had some assistance from none other than his "friend" Superboy.

Back at Teen Titans headquarters, Robin reprimands Superboy, telling him he is not part of the team. The rest of the team sympathize with Jon, and start to argue with Robin, when Tim Drake appears on the view screens, and tells them that he is after Superboy, and they need to hand him over to him. He tells the team that he has neutralized both Raven and Kid Flash's powers, and proceeds to capture Superboy by shooting a "symbiotic" type substance at him, one that grows and encapsulates him. A panicked Jon begins to lose control of his powers, and starts to overload, he pleads to his friend Damien for help, but Damien tells him to fly up, otherwise he will kill them all.

In doing so, there is a large explosion of sorts, one that takes out almost the top half of Titans Tower.

Elsewhere, three individuals look at the events going on, they lock in on Tim Drake/Batman's location. One asks if he is dead, the other responds that they can't get a read on his vitals. They ask the third... "Conner, what do we do?"

Story - 5: What a great second chapter, to what will be an instant classic!

If you have followed my "Doomsday Clock" and the "Elsewhere in the DCU" reviews, you will have seen that we covered the events of Detective Comics and Tim Drake's abduction at the hands of Mr Oz. And the future Tim coming to this time to "set things right" in his way, so that the dark bleak future that he belongs to doesn't need to come to be.

It's only fitting that Tomasi and Gleason rope in all the young heroes for a story line such as this. In the last arc featuring Kraklow and the sort, we saw Jon introduced to the Teen Titans, and here he builds on that continuity, by Jon sneaking around to "help" out the Teen Titans. And as per usual, Damien is a jerk, but at this stage, I wouldn't have it any other way.

The real emotional kicker was the way Jon pleaded with Damien for help. Tomasi and Gleason captured what it's like for any 10 year old kid who is being attacked by something he can't control, no matter what powers he may have. There was a real sense of claustrophobia in those panels. And when he says, "Tell my mom and dad I'm so sorry"... Not since Ronnie Raymond was stabbed in "Identity Crisis", have I felt such a gut punch in a scene where a hero sacrifices himself for the greater good.

Tim phasing in and out of "hypertime" was a nice touch. As many may know, hypertime was a concept that was developed in the pages of Superboy in the late 90s, that connected all realities together, before the multiverse came back in "Infinite Crisis". So the fact that Tim is using it to travel back from his time to the present is a nice nod to the of continuity of yesteryear by Tomasi and Gleason.

I also enjoyed that there was a call back to Hamilton County and Jon's friend Cathy. Again, a little bit of continuity can go a long way with many of us fans.

And finally... Conner Kent is back!... And not just him, Cassie and Bart also... Even though they are the future adult versions. I have been waiting for them to arrive in the Rebirth era, since it began... Especially Conner.

As I stated above, I have covered the "Doomsday Clock" and everything that lead ups to it, and I had many theories about Conner Kent being missing. So I'm glad to finally see him in these pages... however, this is the future version, and in the present Conner has still been missing, along with Bart and Cassie.

Currently, the Rebirth era follows after the New 52. And sadly, the versions of Conner, Cassie and Bart weren't the best interpretations written by Scott Lobdell. I really hope that they are not cannon during this era. They seemed to have righted the ship with Tim Drake, and I sincerely hope that the rest get the same treatment also. What has me most afraid of this, is that in the latest issue of Redhood and the Outlaws, the Outlaws and the Suicide Squad come across Harvest's dead body and his lair. And there is a flashback scene of the New 52 Superboy in his "tron suit".

All in all, I'm loving this crossover so far, and really can't wait until the next chapter, which is in Teen Titans #15. Be sure to check that one out also.

Art - 4: A little bit disappointed that we didn't have Jorge Jimenez art again in this month's issue, but if you read Superman #37, you would have caught his awesome renditions in that issue of both Superman and Batman battling Tim Drake.

This issue we have Ryan Benjamin, a fantastic artist in his own right. He is a Wildstorm alumni, which was pretty evident in the opening pages of this issue.

There is a sense of kinetic energy to his action scenes, and the pacing of the story in general. This is evident when Jon takes out all the bad guys for the Teen Titans.

I really hated having to mark the grade down a notch, but with all of Ryan Benjamin's strengths, it was his awkward and overly cartoonish facials that took me out of the story a bit. The Teen Titan members looked quite hideous in some panels, especially Beast Boy. It felt a little rushed, so it may have been a deadline issue. As Ryan's work is usually far better.

The reveal of Conner at the end also looked awkward, with all the detail on his face. Not sure if that was meant to be a "Jim Lee-ism" or Conner is meant to be much, much older.

Richard Friend's inks were also on point. I have always liked his attention to detail.

Lastly, the colors by Gaeb Eltaeb are very vibrant, but nothing striking. Maybe I'm used to Alex Sanchez's superb digital paintings over Jorge's art, but they were just there for this issue, nothing really popped off the page for me.

Cover Art - 3: I like Francis Manapul's art, but this cover just didn't do it for me. It's full of action, but seems more busy. It didn't really make me feel that this may be an important chapter in a larger story arc.