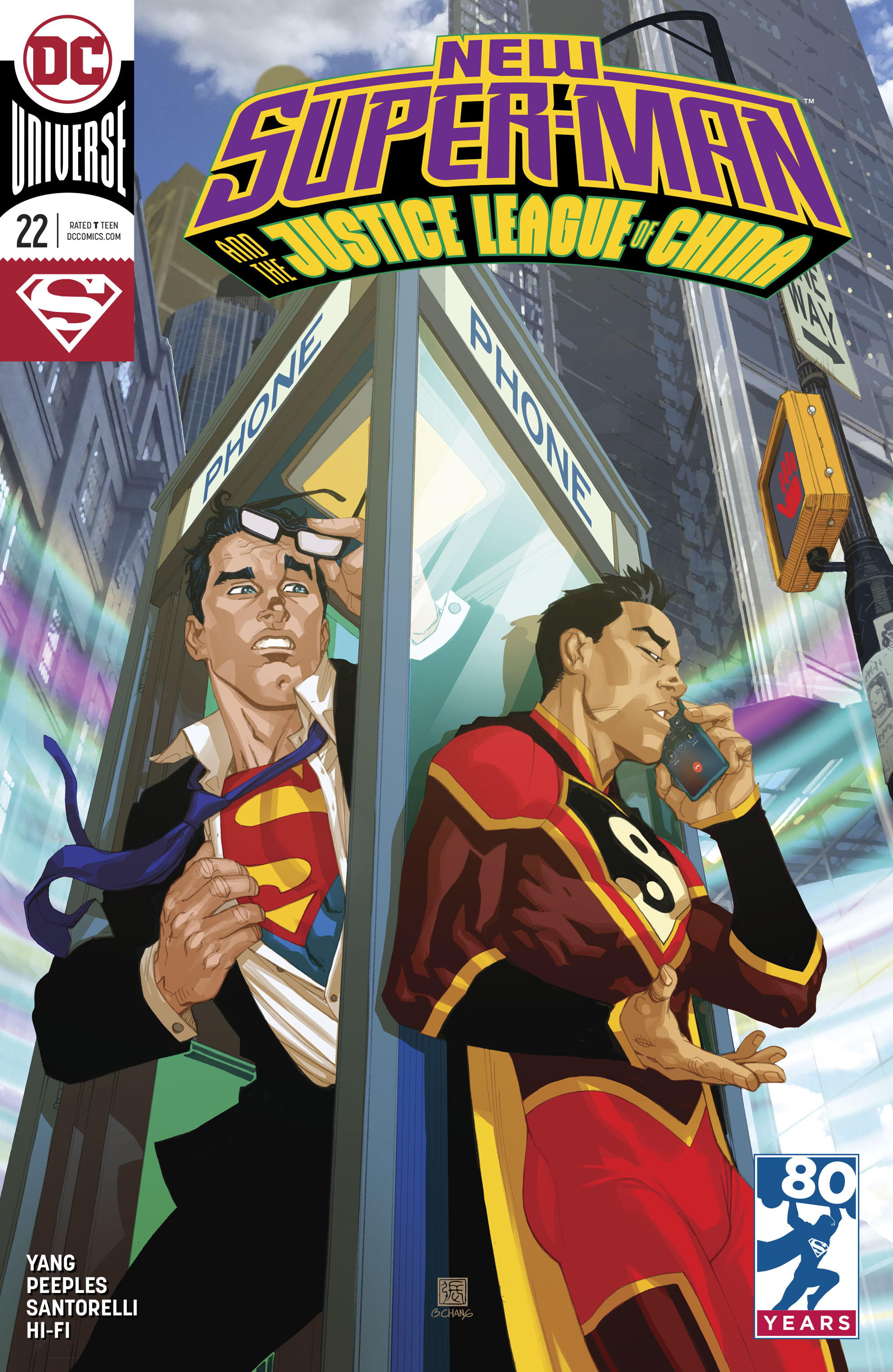 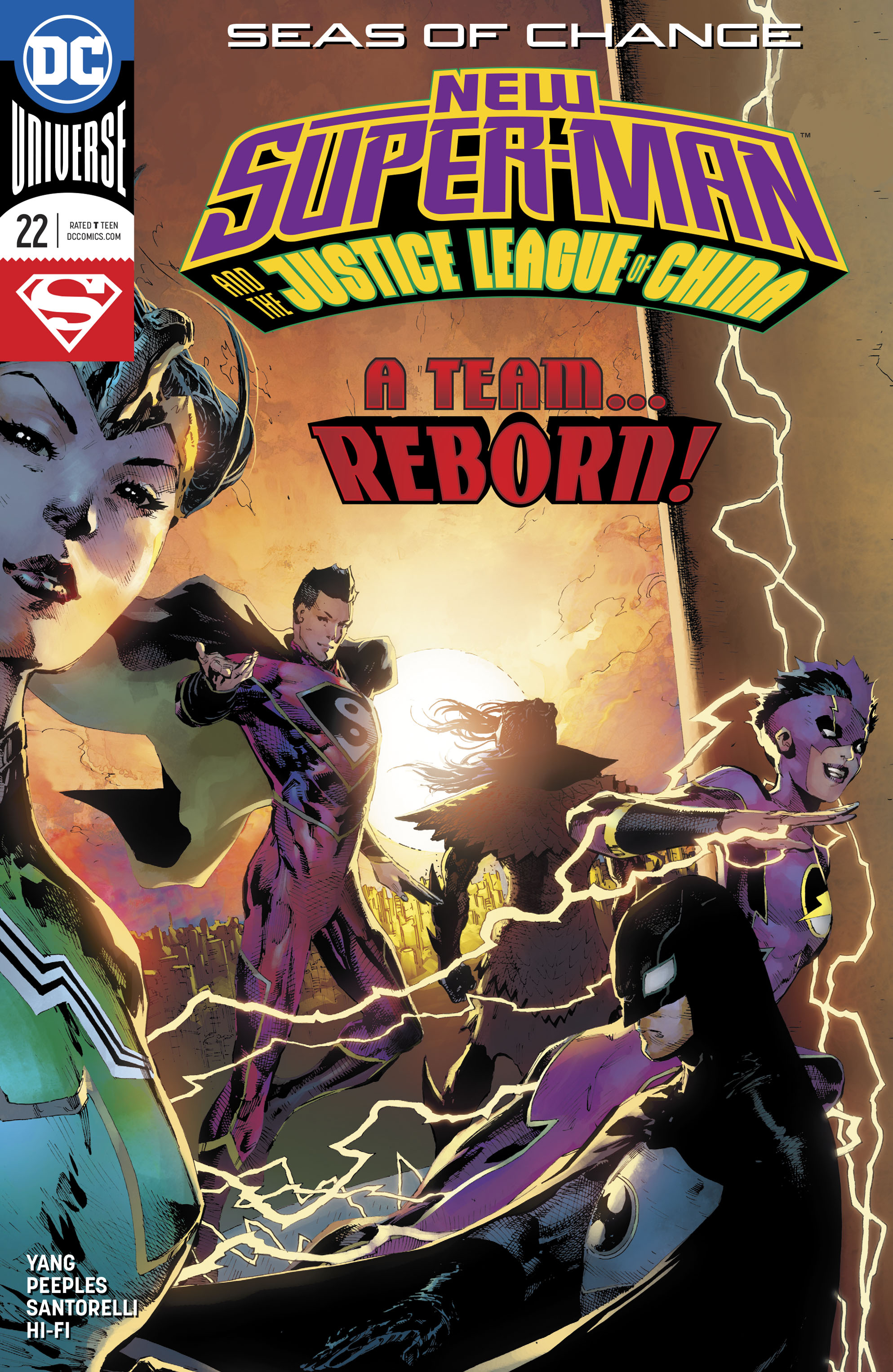 New Super-Man and The Justice League of China #22

Baixi and Deilan discuss a course of action in dealing with Kwang-Jo before he, as The Dragonson, attacks. Super-Man and Avery arrive to lend a hand as the Chinese Lantern Corps make an appearance thanks to a call put out by Baixi. The Dragonson has dropped his sword and reverts back to his human form. Deilan and Avery rush off to save Kwang-Jo, with Super-Man joining soon after. The Lanterns hit Kenan with a kryptonite ray, but Kenan resists, releasing a burst of energy which leaves him glowing white. Baixi attempts to rescue Kwang-Jo before they're both captured by the Corps and taken to different locations. Avery, Deilan, and Kenan rush off to rescue them. Before they leave, Avery grabs the bone that transforms Kwang-Jo into The Dragonson.

In The Crab Shell prison, Baixi finds himself in a cell with Anathema - essentially a discount Bane. Anathema is choked out from behind. Baixi is horrified to discover that the person responsible for taking down Anathema is Alpaca, Baixi's twisted younger sister.

Meanwhile, Kwang-Jo sits in a bubble construct as he is transported to Pyongyang. Telepathically, his father communicates with him about his mission to Paektu Mountain. There, Kwang-Jo is to open the heavenly floodgates and drown every man, woman, and child who pledges loyalty to North Korea's leadership. Not far behind, Kenan and Avery follow the Lanterns that have Kwang-Jo. Kenan reveals that he's reached a new stage of enlightenment that he's been working on reaching for months. Kenan also reveals that the solution to the entire problem is to kill Kwang-Jo.

Kwang-Jo is delivered to Pyongyang. Government officials and Dr. Omen circle around the newly captured youth before Kenan and Avery burst in. Determined to kill Kwang-Jo, Kenan goes to unleash a blast of heat vision. Fortunately for Kwang-Jo, Avery had throne the bone to him, transforming Kwang-Jo once again into The Dragonson. Wasting no time, he makes his escape and heads for Paektu Mountain and unleashes the heavenly floodgate.

Story - 4: It looks like Kenan and the team have a bit of a dilemma here. If Kenan's new state of enlightenment brings him a truthful revelation, then the best course of action is to kill Kwang-Jo. But regardless of the validity of the revelation, Kenan and the rest of the team have to follow a moral code, which I'm sure includes a hard rule against killing. In this new state of being, Kenan seems all for killing the kid, but would going through with it affect his powers? Regardless of his role as the physical embodiment of yin and yang, he's still a Superman and he still had to unlock his powers by behaving as the real Man of Steel would. If he kills Kwang-Jo, is there a possibility of him losing his powers? I'm interested to find out.

There isn't too much else going on here besides the reintroduction of two minor characters from a couple arcs back. The story itself is interesting, but it feels like this series is living on borrowed time at this point. I like these characters and I want the book to continue, but it feels like this book is preparing to wrap up in the next couple of months. I could be wrong, but that's just how it feels.

Art - 4: Peeples continues to turn in excellent work. The extra large panels and splash pages are truly spectacular. Every now and then, a face looks a little weird. Action scenes are bombastic and filled with energy.

Cover Art - 3: The cover is fine. It would probably catch a customer's eye, but it's nothing to really write home about.

Variant Cover Art - 3: Superman looks fine. Kenan, not so much...