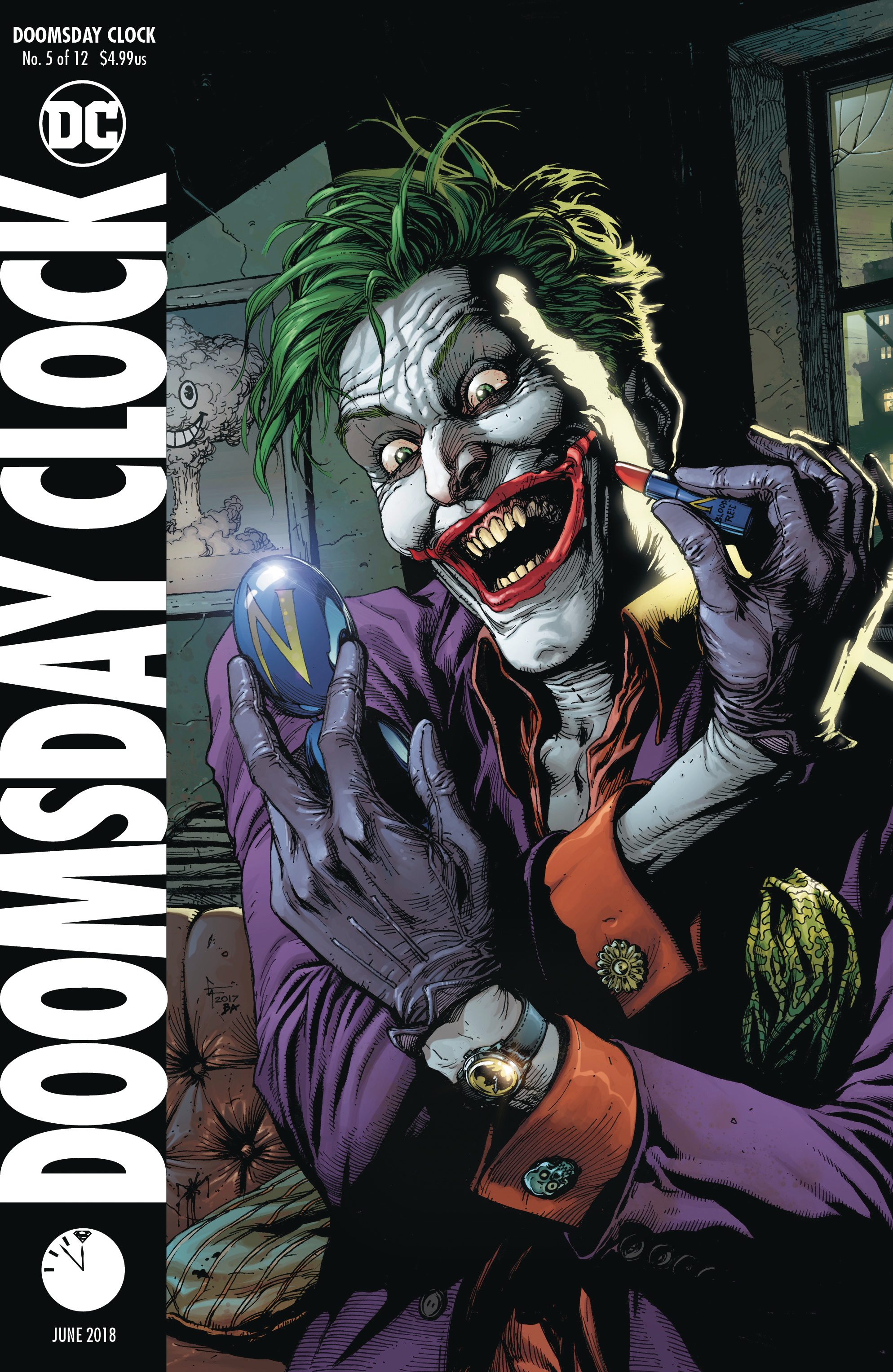 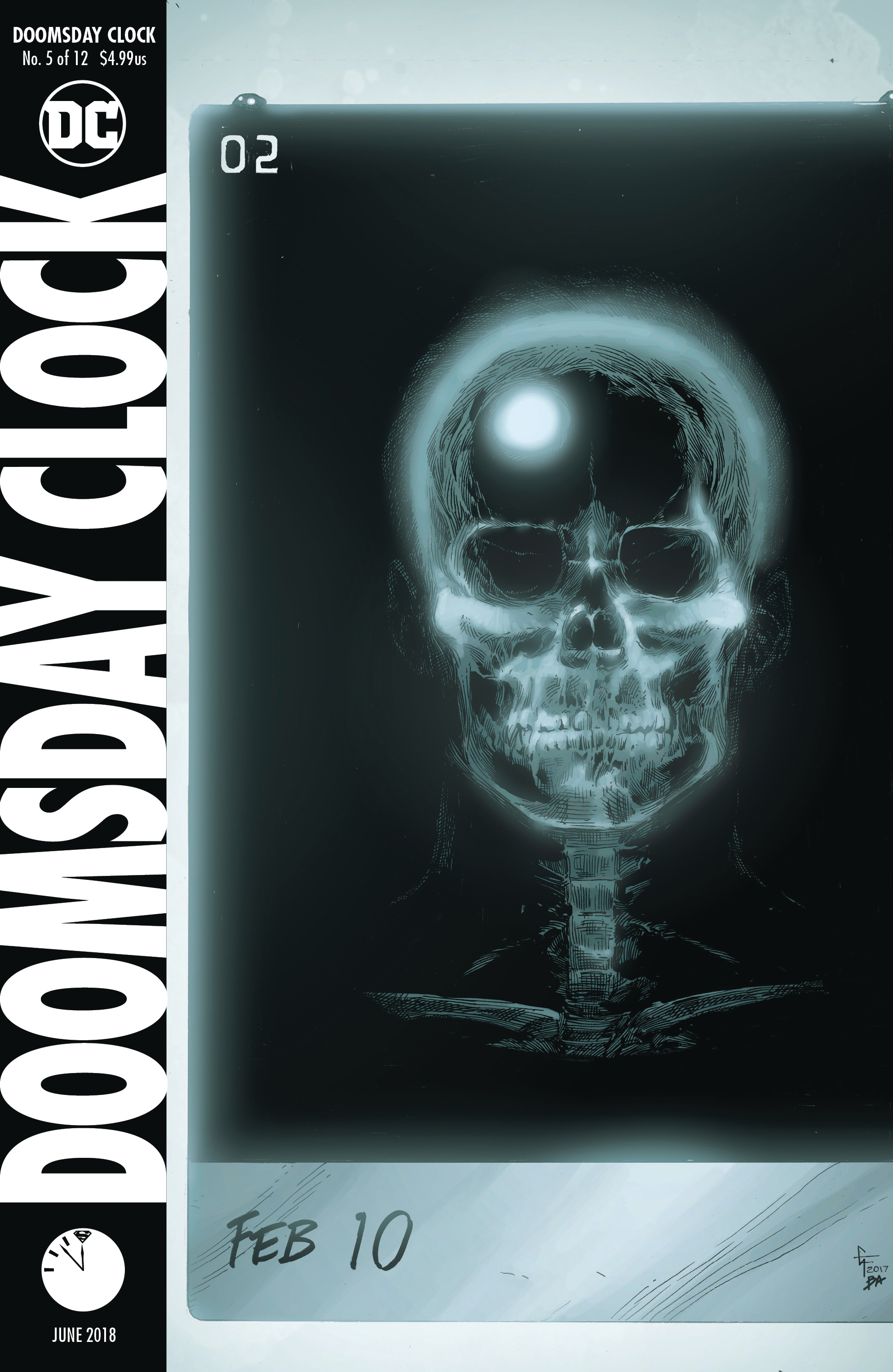 "There Is No God"

Reviewed by: Keith Samra
Click to enlarge
Our story begins with Ozymandias in hospital getting checked out by doctors, with a couple of officers present. Ozymandias is seen as the man that tried to murder Lex Luthor.

After they all leave the room, Ozymandias reveals that he has been conscious the whole time, and he pulls his sensors of his chest, to make it appear that he is flat lining. All this is a ruse, so he can escape the hospital and the police custody.

Over at the Daily Planet, Lois is having an argument with Perry White, over the fact that Perry has sensationalized her headline, to sell a few extra copies and get a few more clicks. Lois vents her frustration to Clark, and tells him that someone is definitely behind the so called "Supermen Theory". They both watch on, as there are multiple negative reports coming in of superheroes in the media, especially American based heroes.

We cut to Gotham, where newly escaped Rorschach and Saturn Girl ditch their Arkham Asylum gear, and find clothes that they are more comfortable in, that resemble their superhero costumes.

It is also revealed that the elderly Johnny Thunder has escaped his home for the elderly, and is attempting to leave town.

Ozymandias makes his way back to Night Owl's ship, where Batman is waiting for him, reading Rorschach's journal.

Across town, The Comedian is investigating the bar that The Mime and Marionette laid waste to, after they left Night Owl's ship to explore this new world.

The Mime and Marionette are slowly making their way to finding The Joker, who is planning an attack on police headquarter, they want to join in on the fun.

Batman and Ozymandias fly across town in the ship, with Batman trying to persuade Ozymandias to turn himself in.

Over in Metropolis Lois is in the midst of interviewing Lex after the attack at his office and Lex tells Lois wants to work with her, in order to get to the bottom of the Supermen Theory. Lex tells Lois that he has discovered who it is that has been creating meta-humans for the government, and that they were at one point a member of the Justice League. Superman listens to the conversation from high above.

Batman struggles with Ozymandias on the ship, and is cunningly outsmarted by him. He is knocked out of the ship, and he manages to get a line in to save himself, sadly he is too close to the ground, and is pulled down by the angry mob, and beaten badly.

Johnny Thunder is being chased by some thugs across town, and manages to find what he was looking for, Alan Scott's Green Lantern Power Battery. The thugs manage to catch up to him, and almost beat him with it, when Rorschach and Saturn Girl come to his rescue.

Finally we end with The Joker being introduced to The Mime and Marionette, and The Joker's goons bring him the beaten body of Batman.

Story - 5: Wow, this issue certainly kicked things into high gear. It made writing the synopsis tricky as well, as I didn't want to leave too much out.

I want to start by addressing my own criticism of this series so far, as to the pace that it had been traveling at. I felt that in 4 issues, we hadn't gotten that far ahead in to the story, and issues 3-4 didn't do much to forward the plot. Thankfully that changed with this issue, as we had a lot of story and not enough pages it felt.

Much like the original series, there is a fair bit of exposition through news reports and the like. We got to see a little more of the DCU, which made me very happy. From Firestorm, Hawk and Dove, Pozhar... to Jack Ryder, the original Killer Frost, and of course, one of my personal favorite characters of all time, Black Adam.

I loved how Johns took these characters, and inserted them into real world settings of terrorism, fascism, sensationalism and misinformation.

Along with seeing the wider DCU a little, we were also treated to a couple of scenes with Lois and Clark. And I must say I love it when Lois is written as a hard hitting journalist, one that has an honest streak, and doesn't want any of her articles to seem misconstrued. Even Perry's desire for more "clicks" and selling a few extra copies was right on the mark, it's what any editor in chief would be thinking of, in order to keep his bullpen going. This goes to show, that Johns took great care when he plotted this issue (and series), great little character moments right there.

Johnny Thunder finding Alan Scott's power battery made me think back to the "Button" storyline, where Batman and Flash investigate the Comedians button. At the end of that, we see Jay Garrick make his return to the world, only to be taken by Dr Manhattan. With this in mind, it appears that the Justice Society will most likely play a role of some sort in the coming issues, how big that role is, is to be seen.

The Mime and Marionette seem like they would be a perfect fit for The Jokers gang, I'm anticipating the next issue, as I want to see what happens next, now that they have met.

Which leads me to Batman, in the closing pages, we see that he has now been captured by the Jokers crew, beaten and battered. Given the nature of how violent this series is, I wonder how John's will deal with the Dark Knight at the mercy of one of his greatest villains.

I know that it is a plot device, but the "Supermen Theory," which is basically having the general public hate or distrust its Superheroes/Meta-Humans gives it a New 52/Marvel feel. There are definitely dark times ahead in the DCU, but having enjoyed the Rebirth era, especially with Superman, I found it a little jarring. Superman really doesn't suit wearing the public mistrust as part of his essence. So in saying that, I am very intrigued where John's will take this series.

Art - 5: Gary Frank's art continues to amaze. He has taken the format that Dave Gibbons established in the original series, and made it his own. The nine panel grid format through most of the issue, giving it that storyboard feel, is nothing but jam packed with detail and moodiness. The tone is set, but it amazes me what Frank is able to do with each panel and page.

Frank relies less on technological effects, and draws in most of the detail, like the x-ray scenes at the beginning. Many top artists today would use a Photoshop effect for sure, but Frank manages to make them look just as effective by hand. If anything, the only other artist I know of that relies on their own talent the most is Alex Ross.

Was good to see Frank tackle Lois once again, and I must say he has perfected his Lois a fair bit. She looks more attractive and doesn't suffer from what I like to call the "Gary Frank Crazy Eyes". Also loved the Clark Kent in classic blue suit with striped tie, normally I'm an advocate of evolving and making Clark look like he fits in the real world, as opposed to the 1950s, but this looked awesome to see him in a throwback fashion.

Speaking of Clark, it was nice to see that Frank drew him in the classic costume, with the trunks. Now that it's established back into continuity. The only rendering we have of the Reborn belt is on the cover of issue number one.

Batman is next on the list, and he looks fairly classic, especially with the yellow oval bat symbol on his chest. He is sans trunks, but it works for him. He almost has that "Batman: Earth One" look, coincidentally also drawn by Gary Frank.

The coloring also continues to be top notch, with the modern coloring techniques very subtle, so it feels like it doesn't overpower the art, and has a vibe similar to the original series.

The only thing that I thought was off was the TV screens that feature the news reports. In the Scenes with Batman and Ozymandias, there are a couple of panels where we see Black Adam on screen, and it seemed like he was part of the action, as opposed to being interviewed on television.

Cover Art - 5: I actually loved this main cover of the x-ray from Ozymandias head. Normally the main covers haven't felt that interesting to me, but this one I liked a lot.

Variant Cover Art - 5: The Joker cover is certainly amazing. It has that psychotic feel to it, especially the background.