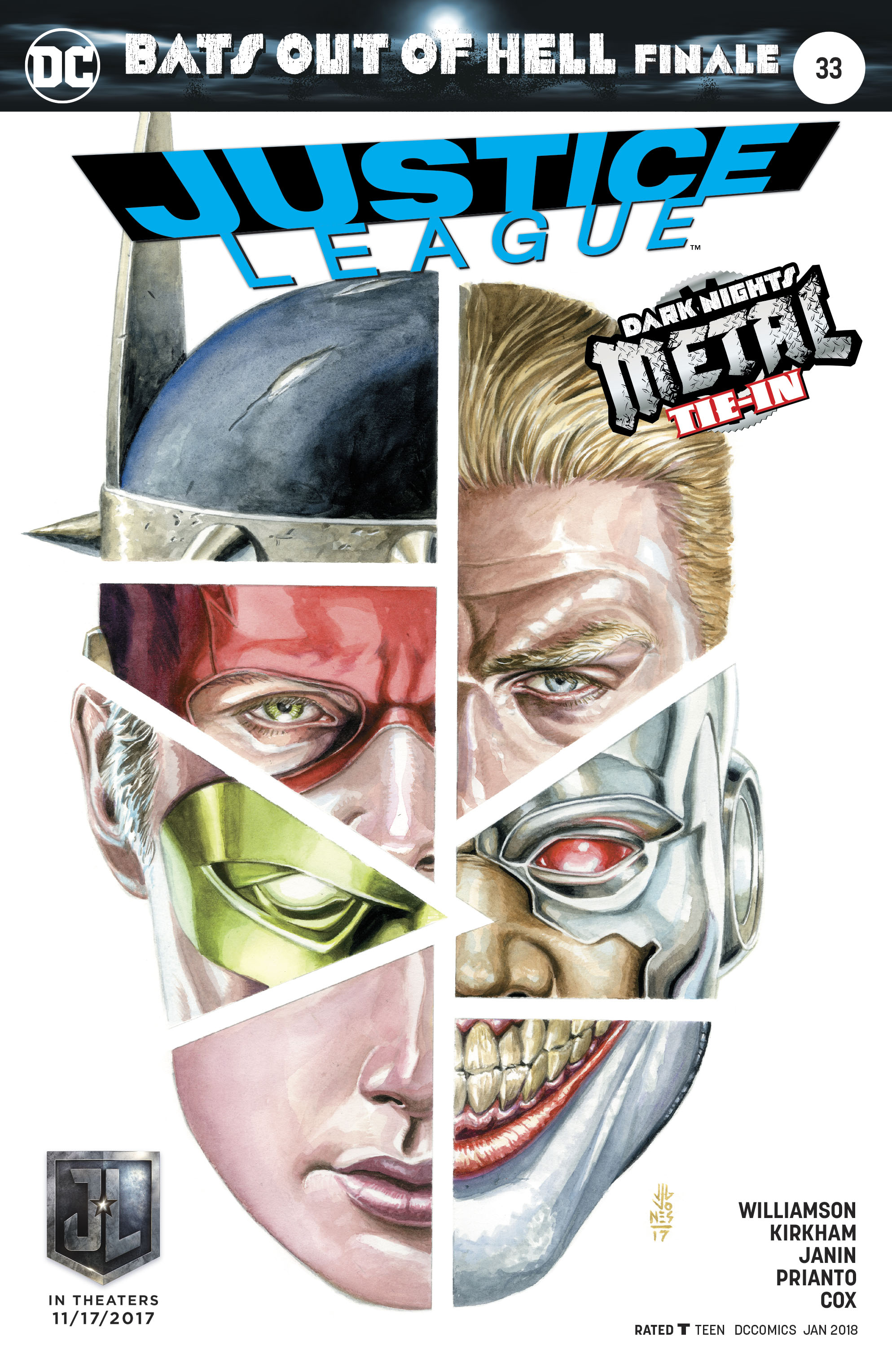 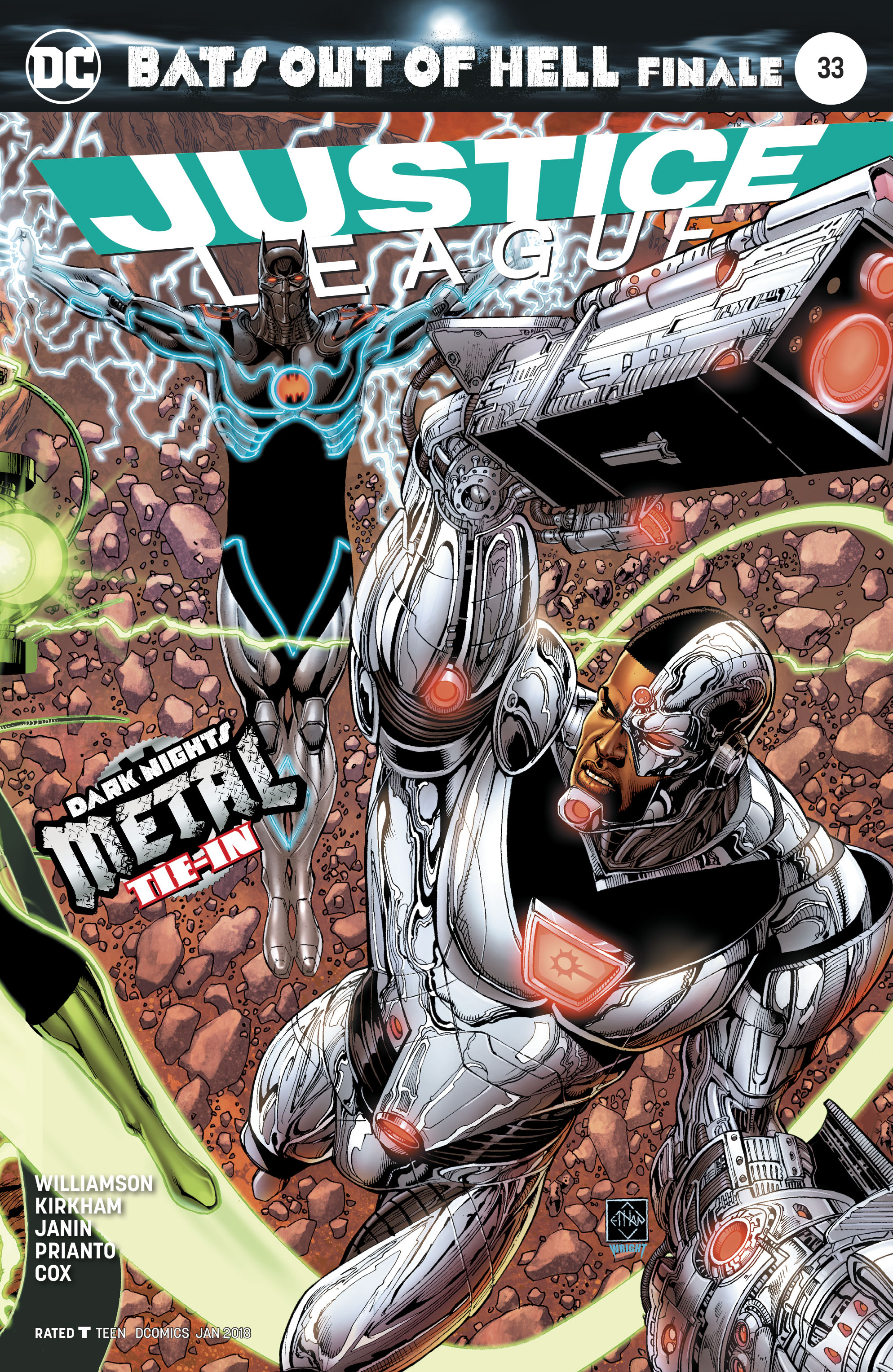 "Bats Out of Hell" - Finale

The remaining members of the Justice League have been defeated and are prisoner to The Man Who Laughs. Meanwhile Cyborg is being tortured as The Man Who Laughs is searching for something called Element X which resides deep inside him. Cyborg's Mother Box tells him that it is time to give himself over to it, to become one with the Mother Box. By doing so he could save his friends. But another voice interferes and tells him, "You're special because of your heart". He decides to ignore the Mother Box and follow the voice and is suddenly up and ready to fight again. Also his remaining teammates become free and a fight ensues between the League and the Batmen from other dark universes. Dr. Fate appears with a few other heroes and says it's time to go before they all become trapped again. Cyborg won't leave until he saves the voice that helped him make his decision. That person turns out to be Raven, and after a short exchange of affection, they teleport away. The Man Who Laughs says now that he has given the League hope they can win, they are actually spreading Barbatos' darkness across the galaxy.

Story - 2: I recently read an article that said Superhero movies are not bringing new readers to the source material, comics. Timing is everything, and with this week being the release of what arguably could be the most anticipated movie in a long time, are we given a great 'one and done' book focusing on the heroes at hand, or even the first chapter in an epic seven part crossover with a cliffhanger so hot that would have moviegoers who wanted to read more about the Justice League counting the days until the second part of the story comes out? No, we get chapter four in a, and I repeat a phrase from my last review, a story within a larger story. So anyone who comes out of the theater and is so excited that they want more, goes to the local comic shop, picks up the newest issue on the shelf and then puts it right back down again after looking through it. With all that said, I have not been following "Metal" and maybe if I had this book might be a 5 Shield contender. But based off of what I said and having only the knowledge of the previous 32 issues of the Justice League book, I cannot go above a 2 Shield. Once again, if you're not buying "Metal" and not a completist, you could theoretically skip this book and pick up issue #34 when Christopher Priest, the new writer on the series, takes over.

Art - 3: There is nothing wrong with the art in this book, the pages drawn by Tyler Kirkham look phenomenal, and Mikel Janin's work is solid. However, their two styles are not even close to similar, which took away from the overall enjoyment of the visuals. Aside from that, each artist was on point, but when you can look at a page and clearly distinguish between the two artists, there is no flow to the book.

Cover Art - 4: I deducted one point for a reason I stated above, this cover should be a dynamic 'every hero front and center', 'draw the moviegoer into the book' type cover, instead it is the fourth of a four part connecting cover. The art is fine, I just think DC overall missed the boat in capturing new readers. Timing is everything.