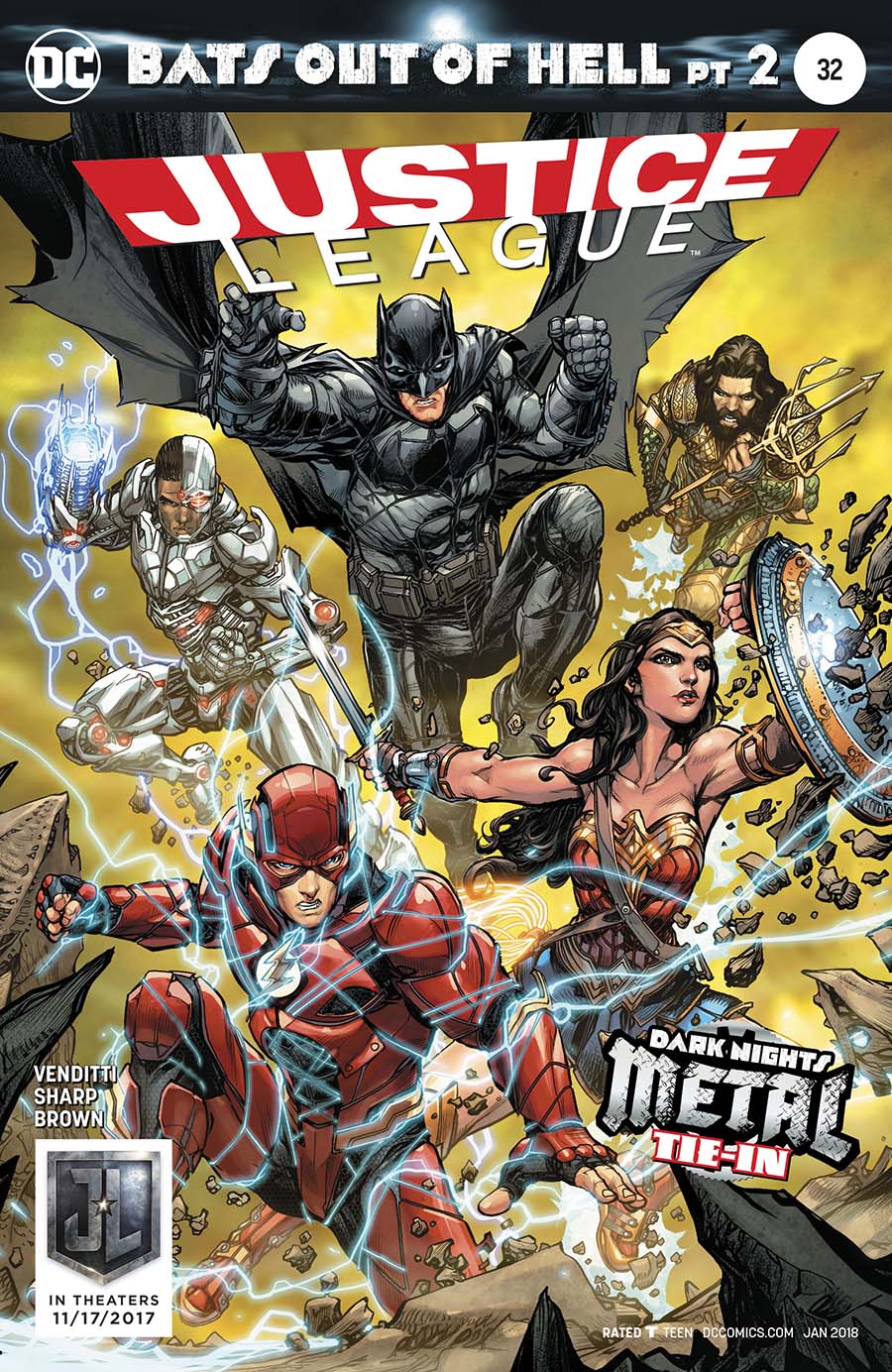 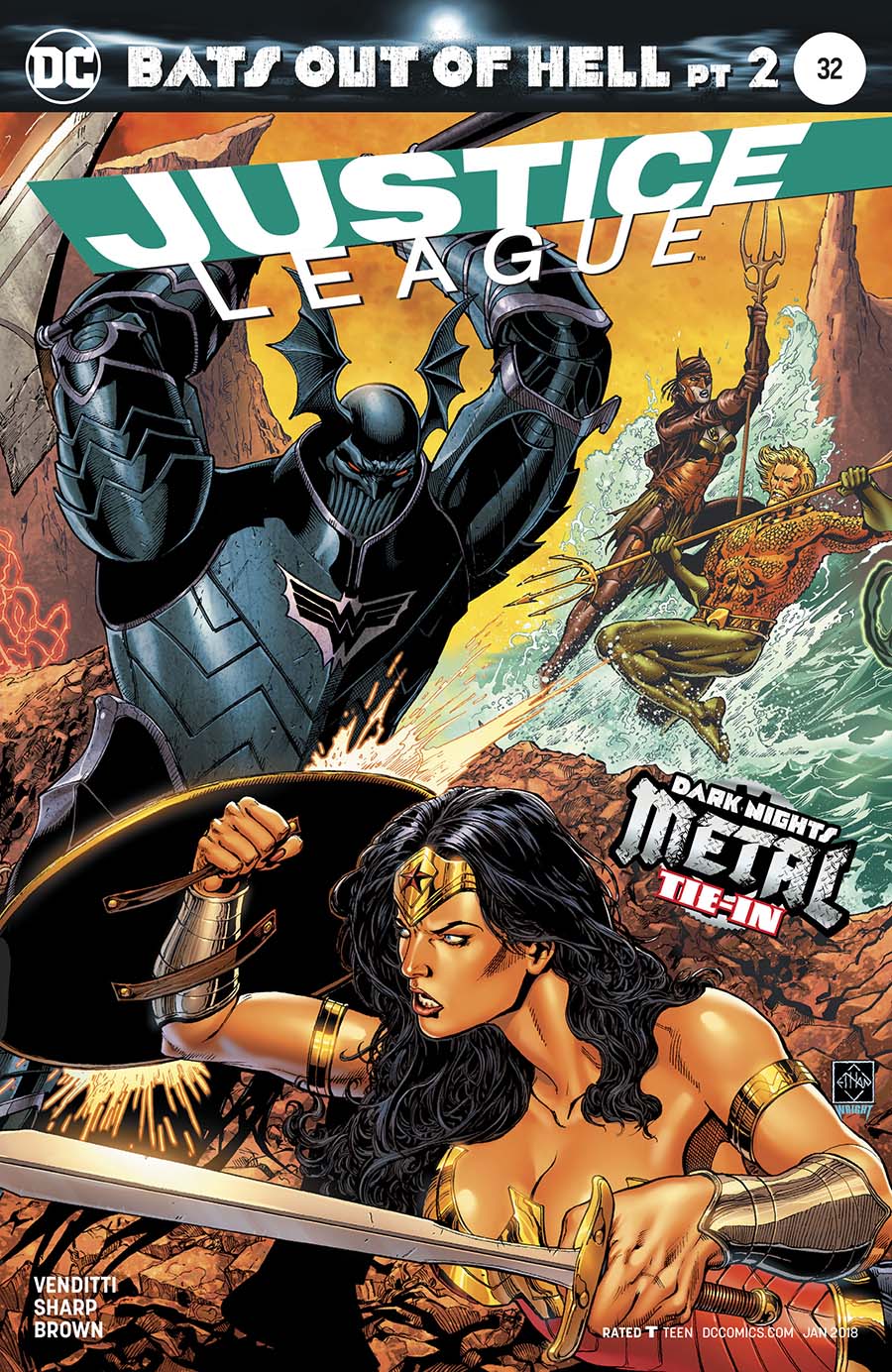 Scheduled to arrive in stores: November 1, 2017

"Bats Out of Hell" - Part Two: "Countdown to Extinction"

Cyborg explains that before he was Cyborg, he was a good Football player. Many potential colleges praised his athletic ability, but he knew it was much more, he studied film for hours, he said Football is a ballet of 11 players. It was his team that made him good. That was then, now his team is the Justice League.

The Flash, Aquaman, Wonder Woman and Green Lantern have been transported against their will to separate areas. Batman is lost and Superman is trapped in another Universe. If this war is to be won, the team needs to come back together.

The Flash and Red Death, an alternate Flash where Bruce Wayne acquires the speed force, are chasing each other in a cave. Aquaman and his alternate counterpart are battling each other below Amnesty Bay. Wonder Woman and her counterpart are under the foundation of A.R.G.U.S. headquarters. While Green Lantern and Dawnbreaker are fighting below Coast City.

If they are to win Cyborg needs to help reunite them, the only problem is he can't, for these Dark Knights have a secret weapon, him.

Story - 4: This is a tough one, for those that are not following DC's epic event called "Metal", you will be completely lost reading this issue. On top of that it is the second part continued from The Flash #33, making this a story within a larger story. But actual writing wise it was well done. The way Venditti linked all the separate heroes' stories together was well done and the overall flow of the story was great. If you have been reading "Metal" then this could actually get a 5, if not then it could go lower. But on the merit of the story alone aside from current "Justice League" continuity this book is well written.

Unless you're reading the entire "Metal" event, or are simply a completest in your collection, you might want to skip this issue as it is solely a "Metal" tie-in and only furthers that story arc. However with that being said, Venditti's writing is great and worth the read even though you won't fully understand the overall story taking place.

Art - 5: Liam Sharp is a fantastic artist, not only was it great to see his Wonder Woman again, but to see his take on the other members was a real treat. I don't think this book has looked this good in its entire run. I hope to see Mr Sharp back on this book in the near future.

Cover Art - 5: So before people question my rating hear me out. Yes, I know the cover looks incomplete, that is because it is. All of the parts of this story arc make one big picture and this is the second of a 4-part giant connecting cover. If you have the chance to see all four cover together I recommend it. Ethan Van Sciver, in my opinion, is one of the best current artists and it's a treat to see him on a non Green Lantern book.

Variant Cover Art - 3: While a complete cover featuring 5 members of the Justice League (sadly missing Superman), it is not as sharp as the main cover. But if you're not picking up the other parts, this might be the cover for you.