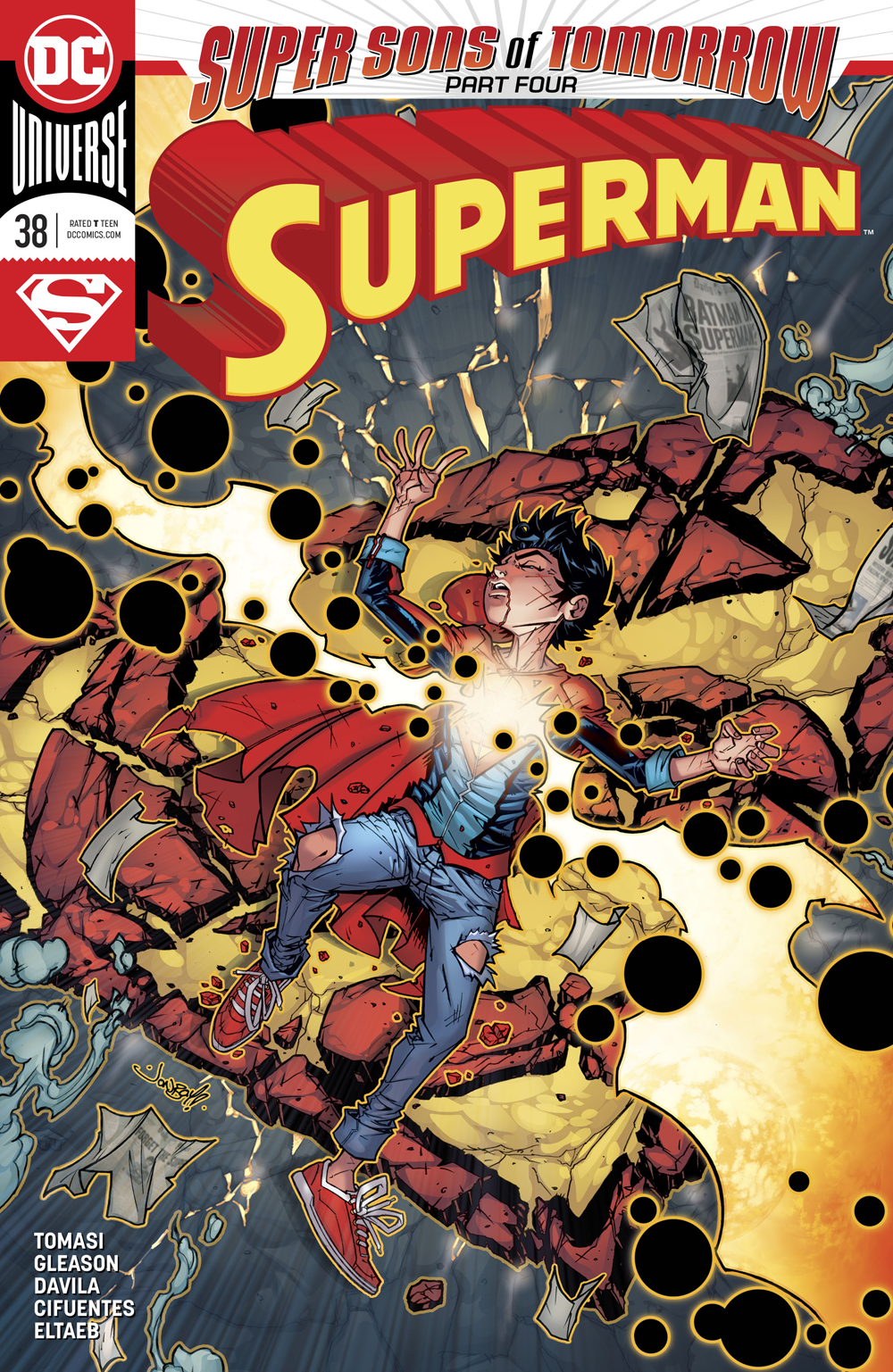 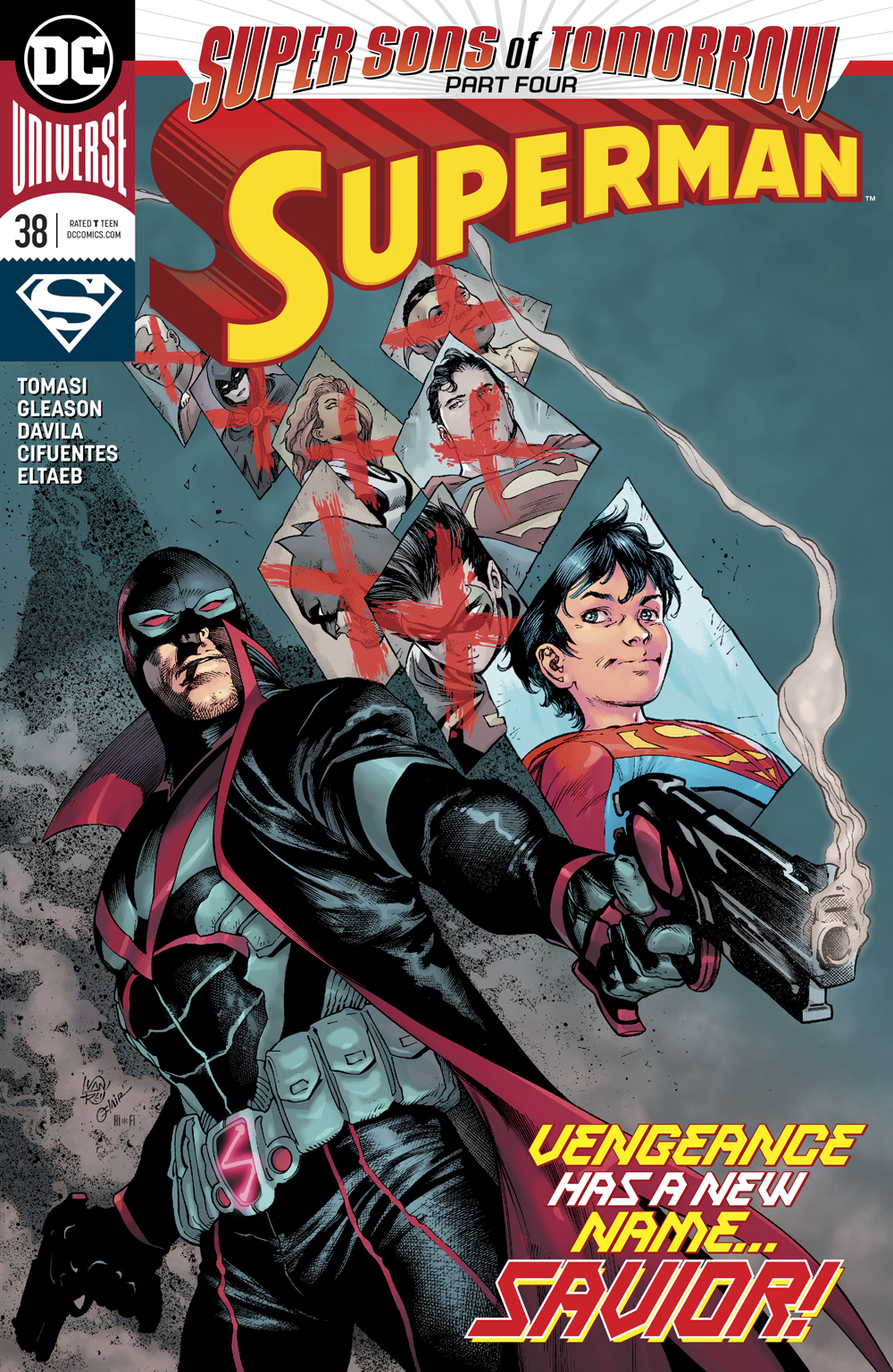 As the Titans of Tomorrow, Superman (Conner Kent), Wonder Woman (Cassie Sandsmark), and The Flash (Bart Allen) are being led through Hypertime in a race to save Superboy and Robin, the Titans of Today: Aqualad, Starfire and Kid Flash are desperately trying to beat 'BatDrake', Raven and Beast Boy from hurting their friends.

It turns out in Tim Drake's future Superboy's solar flare goes out of control causing a devastating event that very few survive. His half human DNA means his solar flare is uncontrollable when manifested unlike a 'purebred' Kryptonian, but this future event has caused conflicting emotions amongst the young heroes.

Jon and Damian find themselves on the run conflicted by their friends' differing views on 'helping' them and try to get to the Fortress as a safe haven. When Jon discovers the damage there and his father trapped in a prison of red sun energy, his solar flare manifests and his emotions get the better of him. As Superman is freed, he and the heroes try to find a solution where nobody dies.

Seeing everyone cast aside their differences and the lengths they go to to save Superboy makes 'BatDrake' resort to something nobody expects, perhaps not even himself...

Story - 5: The race does not let up for a moment this issue, that usually makes for fairly vapid storytelling, but not in this case I promise you that. The stakes are high and the arrival of several beloved faces from the past facilitate some wish fulfilment for long time fans.

The faults in the book are minor in comparison to what is delivered. The pacing (of the entire arc), Superman reduced to a cameo and Jon as a plot device are the 'faults' I mentioned but I have enjoyed every second of the storyline so far.

As all the threads merge, this story starts the year off with a bang and there is so much to love I can't rate it any lower than the full five.

Art - 4: The final page, and Tim's expression leaves me a little perplexed as to what actually happens in the climax. Other than that, just like the writing, every page is a thrill. The fight between the Titans and the Super Sons was just brilliant, but I think the best sequence was the Titans of Tomorrow racing through Hypertime. It was breathtaking, in concept and execution.

Cover Art - 4: The cover text confused me into thinking this wasn't Tim Drake but in fact a reimagined 'Savior' for those of us old enough to remember that pre-Rebirth villain. Other than my overthinking the cover text, this is a fantastic piece of art that conveys Tim's mission perfectly. It is reminiscent of a Supreme Power cover that showcased Nighthawk a while back, but it really sets the scene and threat level.

Variant Cover Art - 5: I love the Jonboy Meyers variants. With the exception of last issues 'sketch' they have been exceptional.

I make no secret of disliking Jon taking on the stereotypical role of 'kid in peril' so I should really hate this cover. I should, but I actually love it more than the main cover. It's a really powerful image so I'll end on a plea: Dear DC, make Superboy more than K'Shin, more than Scott Tracker, more than Godzooky... he deserves to be Superboy not Superman's achilles heel.