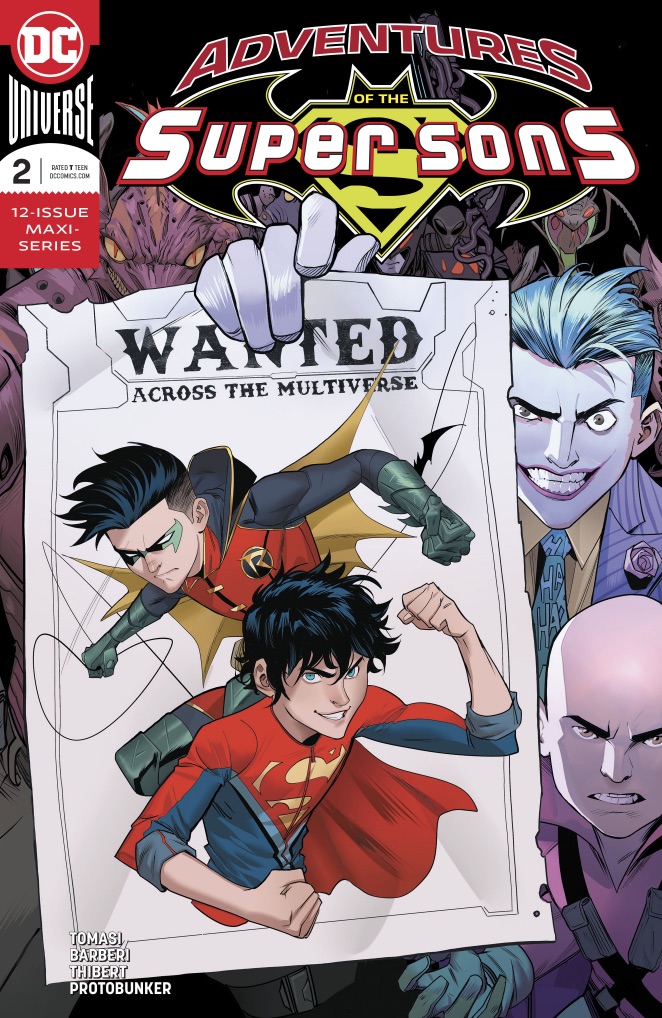 Adventures of the Super Sons #2

Scheduled to arrive in stores: September 5, 2018

We open with a flashback to Rex's past, as we learn that he and his friends are beings of an alien race that watches Earth and its denizens on their devices, and that they are obsessed with the heroes of Earth.

Rex has decided to fashion himself after Earth's greatest villain Lex Luthor, and sought out like minded others, as he formed his notorious team The Gang.

Jon and Damien are captives of The Gang, but find an unlikely ally in Joker Jnr, who helps Damien escape, and tries to reverse the effects of the Synthetic Gold Kryptonite, which turns red, and splits Jon into Superboy Red and Superboy Blue.

Story - 5: What a great second issue and follow up to the awesome cliff hanger of the first. Tomasi wasted no time in keeping the ball rolling with momentum from last issue. Straight away we are thrust into the origin of Rex, followed up closely from the closing scene of the last chapter. This is visual storytelling at its best.

Another aspect about the book I loved was the fact that Tomasi didn't waste any time in getting to the origin of The Gang, and presented us with the answers that we had from issue one, mainly, who is The Gang, and how they came to be.

I can't help but feel that the alien race that The Gang belongs to, and how their lives revolve around the exploits of Earth and its heroes, is a commentary of the current state of how many of us in the real world follow celebrities and the like through social media in all its platforms. How we ourselves can get lost in their exploits and fashion ourselves in their image. Makes one think how we would react if these characters were real in our world.

Also really liked that Tomasi commandeered the Tesseract idea from Marvel, and gave The Gang an interdimensional portal to instantly travel between space.

Tomasi has a real good handle on the direction he wants to take the boys in, and he never ceases to amaze at how he can write the adventures of the boys and still sprinkle in a fair bit of their fathers' attributes as well. For instance, the scene that Jon sacrifices himself in order to save The Puppeteer from Rex's blast. And the way Damien takes advantage of his opportunity to take down Joker Jnr.

I loved the scene where we learn that in order to make Joker Jnr more like the real Joker, Rex murders his parents to break his mind, and when that didn't work, he shoved his head in a vat of acid.

Regardless of how enjoyable this issue was, Tomasi seems to hook us in with a peak at the next chapter, as the synthetic Kryptonite which was once gold, now is red, and seems to have split Jon into Red and Blue. I cannot recommend this book enough.

Art - 5: Carlo Barberi once again knocks it out of the park, with his awesome pencils and dynamic page layouts. I love that he can manage to tell a story in as many panels as he can, and doesn't rely on the splash page as his default.

Every scene moves kinetically from panel to panel, which gives it that animated feel that I seem to love and mention a lot. The action doesn't look flat, and moves at a speed that doesn't hinder the enjoyment of the issue.

I haven't focused much on the boys, as Barberi has such a great handle on them. I just wish that I could see them reproduced in a three dimensional form... Such as artist signature style action figures from DC Direct.

Lastly, I just want to mention my favorite scene, where Jon takes the hit for The Puppeteer. Not only is it a very Superman thing to do, but Barberi managed to render the page so well, that the action just jumps off the page. Really love how Barberi drew his unconscious limp body on the ground, and then is dragged away by Joker Jnr. Absolutely a great marriage of story and art!

Protobunker's colors are as exceptional this issue as they were last issue. I love that Technicolor feel, especially how the tone shifts from scene to scene. Really looking forward to his Superboy Red and Superboy Blue work to come next chapter.

Cover Art - 5: Dan Mora's cover fits in really nicely with this issue, and it is a big help that his style matches that of the art inside. I love this composition a great deal.