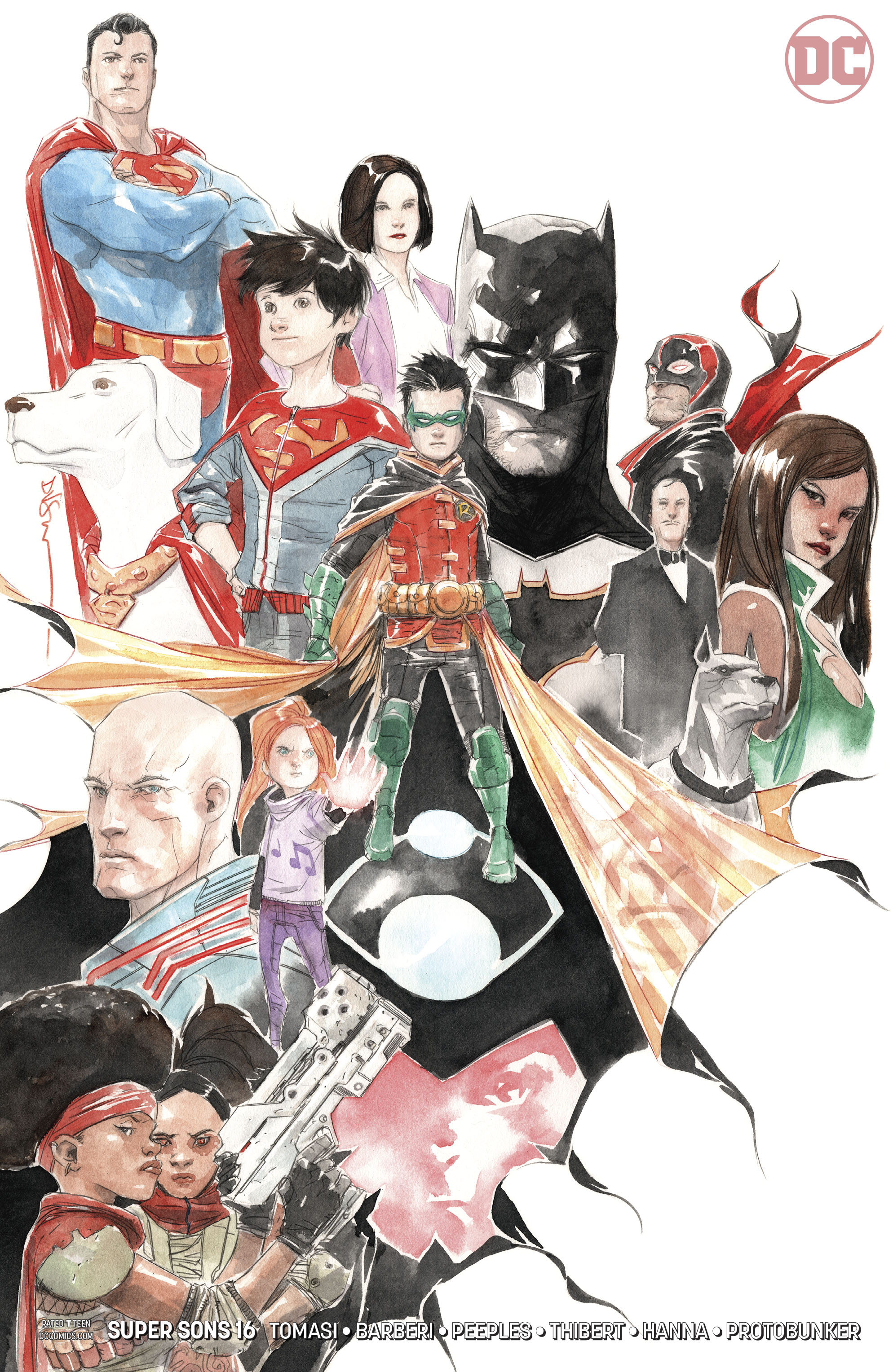 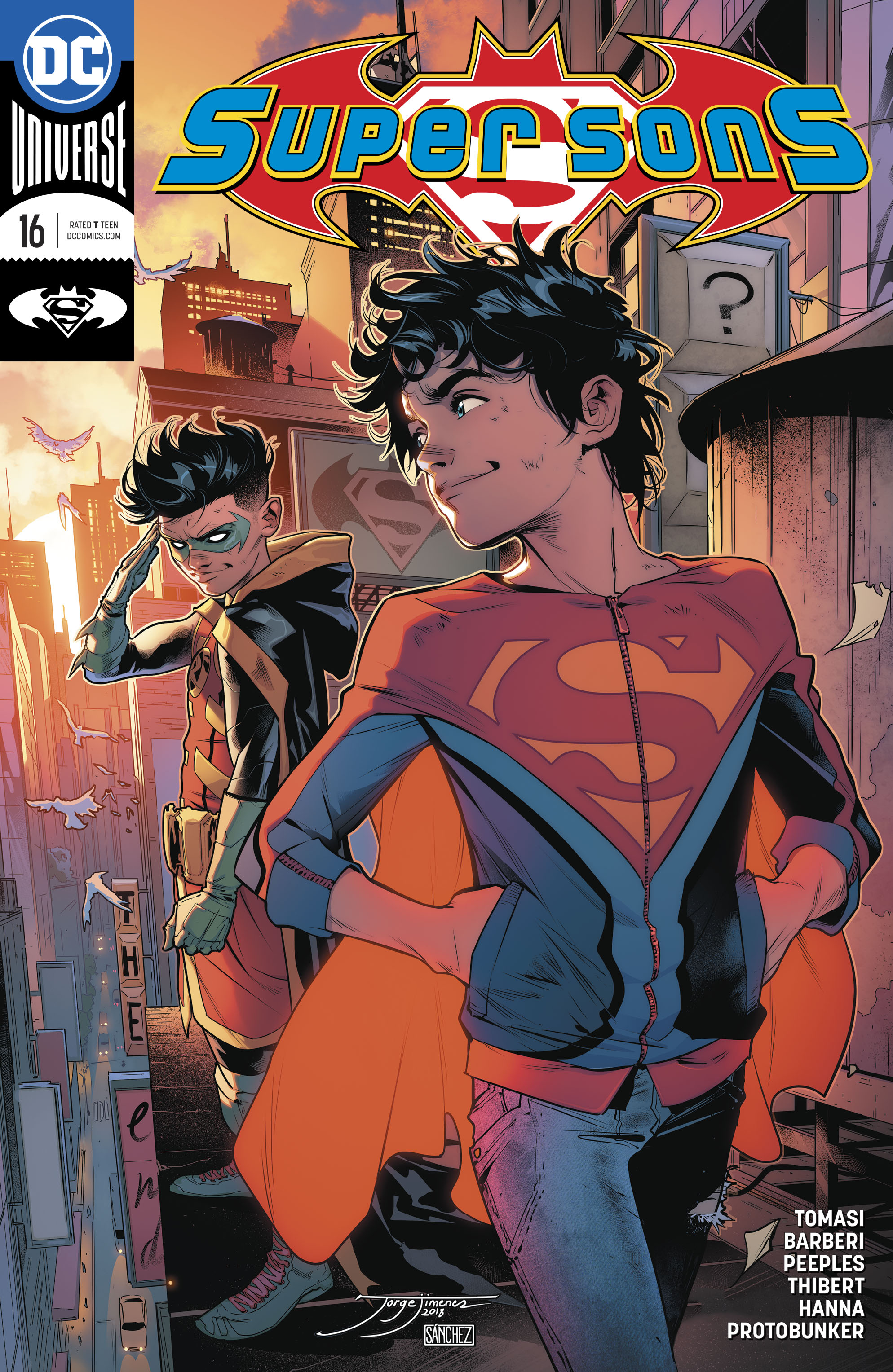 Reviewed by: Keith Samra
Click to enlarge
We open with two young children, sitting on the ground and listening to their "Pop Pop", tell them a tale about the Super Sons.

We cut to Jon as he is being told Kid Amazo's plan to take over his body, and Robin and Cyborg come to his rescue.

A battle ensues, and Kid Amazo utilizes the powers of the JL, and takes over Cyborg's operating system. However this is exactly what Damien wanted, and he and Superboy manage to take down Cyborg, and purge Kid Amazo from his system, by using one of Batman's contingency plans against Cyborg.

With Kid Amazo's plan thwarted, and the Justice League recovered from his attack, Superman and Batman tell the boys that they have done a good job, and jokingly discuss retirement. Damien asks when they plan to retire, and Batman answers with "further down the road".

We end with "Pop Pop" finishing his story to the kids, who claim that the story just can't end there, and demand another story before they have to go to sleep.

"Pop Pop" pulls another book from the shelf, titled "The Adventures of the Super Sons: Vol 2" and tells the kids... "Now you sure you're ready for whats next?... Because the Super Sons sure as heck weren't...".

Story - 5: Well, a nice conclusion to a great little series. Tomasi wrote a wonderful light hearted series in these last 16 issues, one that I personally enjoyed reading and reviewing very much.

The bookends of the kids listening to the stories about the Super Sons was a nice touch, kind of like a "How I Met Your Mother" opening segment. However, it did feel like a bit of a tack on for this final issue. It would have made a little more sense if the opening segment was featured last issue, to cap off this two issue arc. My guess is that this may have been a last minute addition when the book announced for cancellation, and then the 12 issue maxi-series was announced. There is the obvious foreshadowing with "Pop Pop" pulling the The Adventures of the Super Sons: Vol 2 from the shelf.

Speaking of "Pop Pop" I'm guessing that that is an elderly Bruce Wayne, as he was illustrated with a full head of hair, which rules out Alfred, and Clark wouldn't age in such a fashion (unless this is 1000 years in the future, which I highly doubt). The kids felt as if they were obviously the children of the Super Sons. As the grand daughter can be seen floating in the air, when they both demanded another story before bed.

To round it off, we obviously know that there is a Vol. 2 coming, so this issue is more of a season finale really. The last line by Damien "For now though... We can both enjoy just being your sons" felt a little out of character for Damian, but I realized that it's because of this book, that I actually began to like Damian as a character very much, so maybe it's just another example of Tomasi evolving this character from the brash a-hole he was when he was first introduced.

Art - 4: Carlo Barberi had some help by Brent Peeples this issue, and I must say that Peeples did a good enough job, that I almost didn't realize there was a change in artists mid way through the issue. However the reason for the lower grade isn't because of the two different artists, but because in some of the Barberi pencilled pages, the facials seemed really off. With the noses and mouth's drawn in odd shapes and angles. Prime examples are the opening and closing pages. This may be because of having an additional different inker on the book also.

I actually enjoyed not having the double page spreads for once. I was able to read from top left to bottom right, without having to readjust the screen on the tablet.

Loved the shot of Superman, Batman, Wonder Woman and Flash standing recovered after the boys took care of Kid Amazo. Every now and then when Superman looses his cape, he can look pretty awesome without it, when the right artist draws him.

Proto Bunker again did a good job with the colors, gave the page a vivid look and didn't over saturate the page.

Cover Art - 5: Jorge Jimenez as usual nailed the cover. Good way to end the final issue. I love the fade haircut that Damian sports, and the messy wind blown look Jon has. Very Tom Welling/Smallville like.

Variant Cover Art - 5: Dustin Nguyen's chase cover is just as good as Jorge's. I love that he was able to incorporate all the characters that have been featured or debuted in this series.