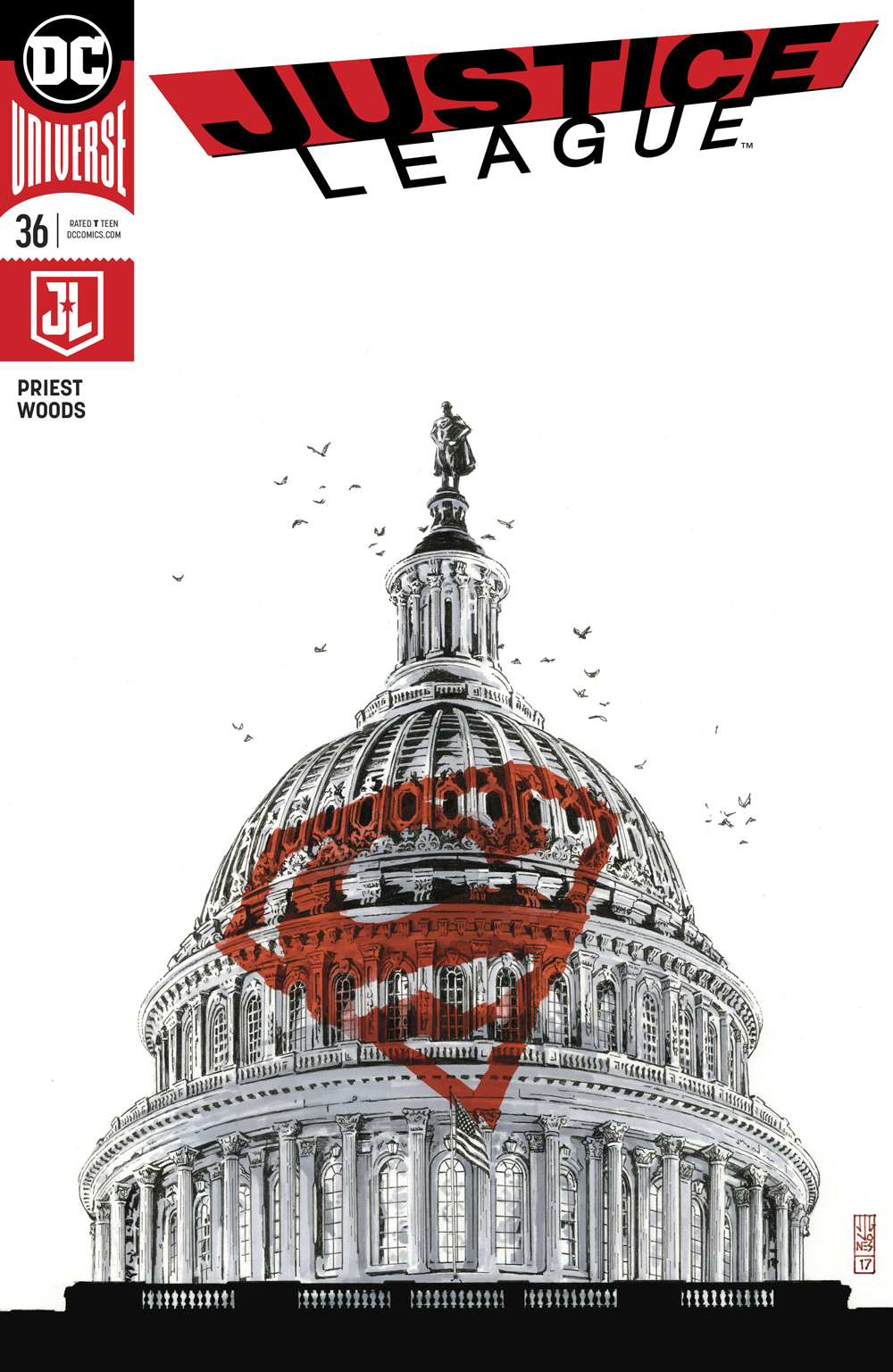 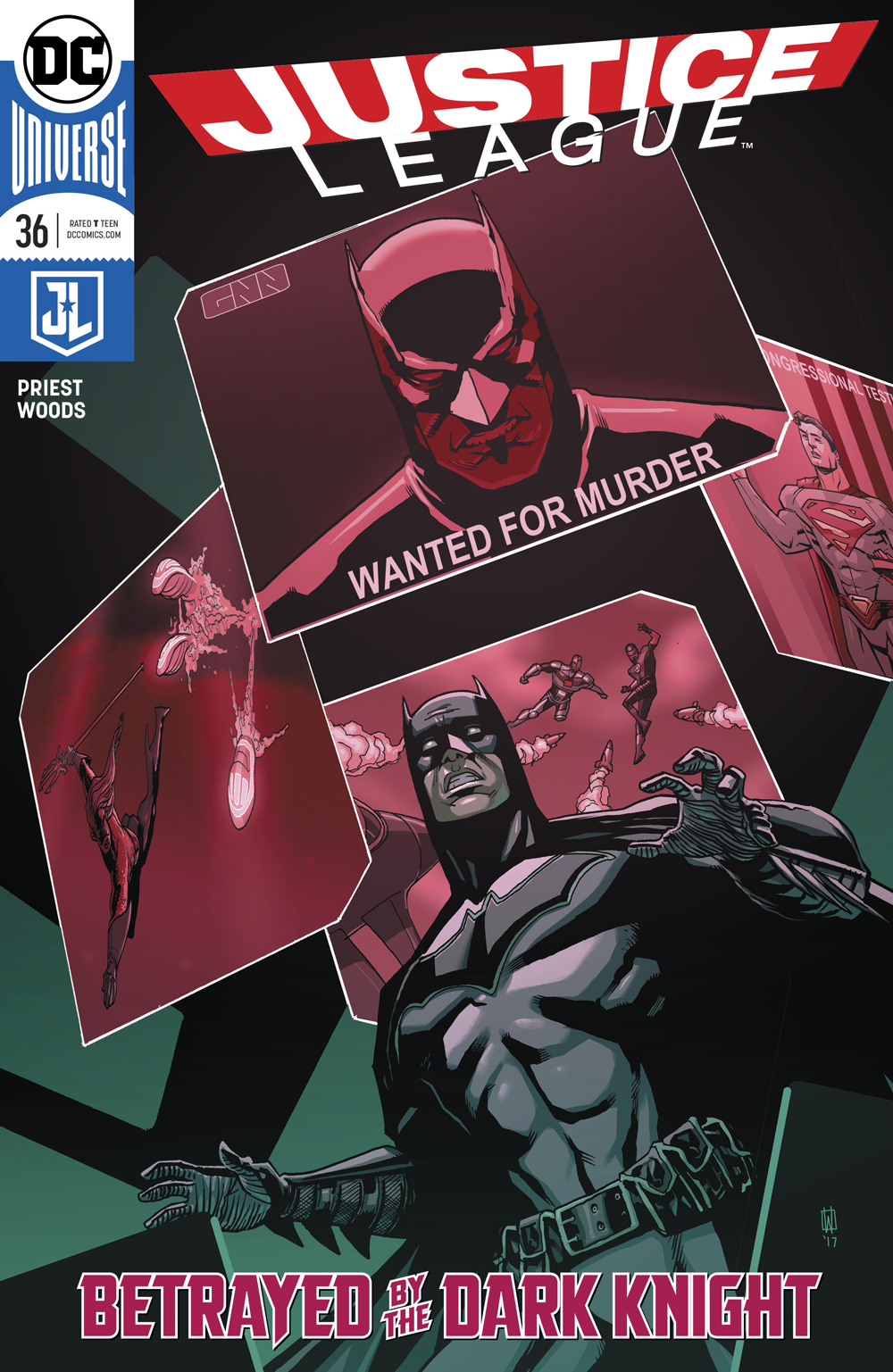 "The People vs Justice League" - Part 3

Dealing with the crisis that has tarnished the reputation of the League. Batman struggles with the imposter impersonating him and murdering people.

In the ocean, Aquaman attempts to remove a stranded submarine carrying nukes to international waters, Batman as team leader tells him not to. The rest of the League struggling with the decision, do the best they can to keep the peace and not cause an international incident.

Batman attempts to set up the imposter Batman, using Simon Baz/GL in disguise, but the imposter gets the drop on him, and knocks Simon out.

Story - 5: So far I've enjoyed what Priest has done with this arc. I like the injection of the real world politics, especially the opening scene at the US House of Representatives. Reminded me of Batman v Superman, and again raised the question, just because the League can do what they do, does that really give them the right to do so, and can it stand up in court?

The scenes with Aquaman were really compelling, Arthur being a leader of a nation himself (though currently in his own book he was removed due to mutiny), and also being a member of the League, lead for an interesting topic raised. Is he a King first and JL member second, or the other way around? And he clearly wasn't happy about taking Batman's orders in regards to the submarine carrying nukes. As readers we are compelled to side with Aquaman, who is simply trying to keep the oceans safe, especially from contamination, should the nukes begin to leak or go off.

Speaking of Batman, I know he is the most popular character that DC has had in over two decades now, however making him the leader is not something I like very much. However, again, in saying that, Priest has done a magnificent job in crafting a story, in which his leadership is not effectively producing positive results. He being caught between several rocks while living in a hard place. The Nightwing scene was great at the beginning, especially him telling Bruce that as Robin he wanted to make the world better, while Bruce was impossibly trying to fix it.

Lastly Priest is great at crafting stories with multiple layers and plot threads, just read his Deathstroke title for a great example of this. Some of the characterizations were spot on here, particularly the Aquaman, Green Lanterns and Cyborg. Superman and Wonder Woman sadly, didn't have enough scenes to really shine through.

So far I have enjoyed this story, I hope that it continues on an upward momentum. I think that this arc would really read well as a whole, and probably best in a trade paperback, once this is all done.

Art - 4: I've been enjoying the art by Pete Woods lately in Justice League. His art has really grown and has a lot more of a polished look. Much better than his work over a decade ago. The inks are not so heavy, and his panel work has improved a great deal also.

His faces seemed a little distorted in some panels, especially Superman and Bruce Wayne's, but I loved the way he drew Aquaman. Obviously they have his sporting longer hair and a beard thanks to the DCEU films. But he looks rather majestic in the classic costume with quindent in hand.

Woods seems to have a very good grasp of Cyborg, which I enjoy very much, as I feel sometimes some artists get him so wrong, and he looks like a man in a clunky suit.

There is a cheeky panel where Superman flies past a jet fighter, and he smiles and waves. This is classic Superman. I loved seeing this. Woods really nailed that scene.

Lastly I loved the final page. The imposter Batman dressed in the classic Super Powers/Bronze Age costume with the canister belt and the yellow oval behind the bat.

Variant Cover Art - 5: This cover is credited as done by Nick Bradshaw, but its signed as J.G. Jones. I like this cover very much, what a striking image.