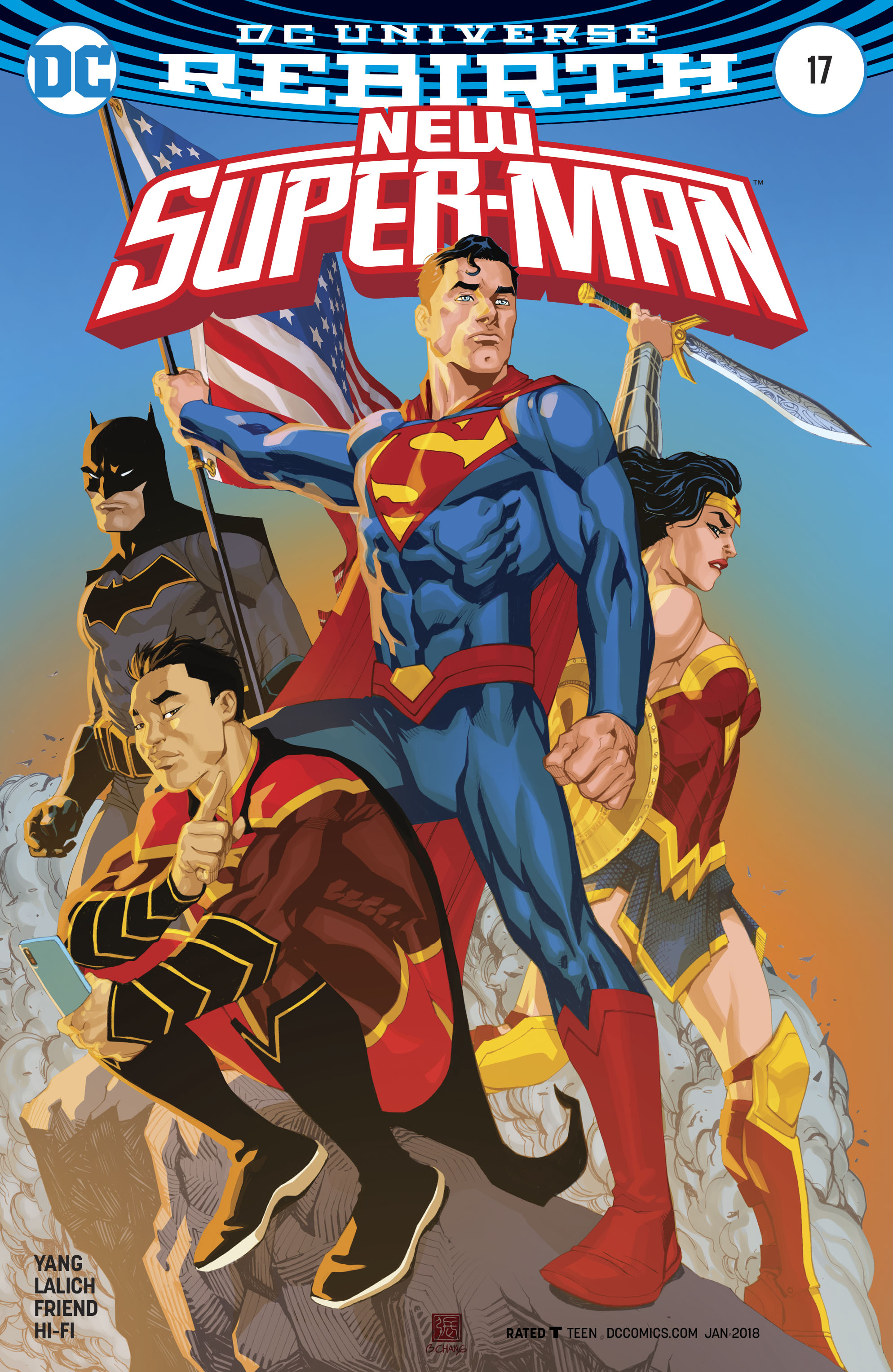 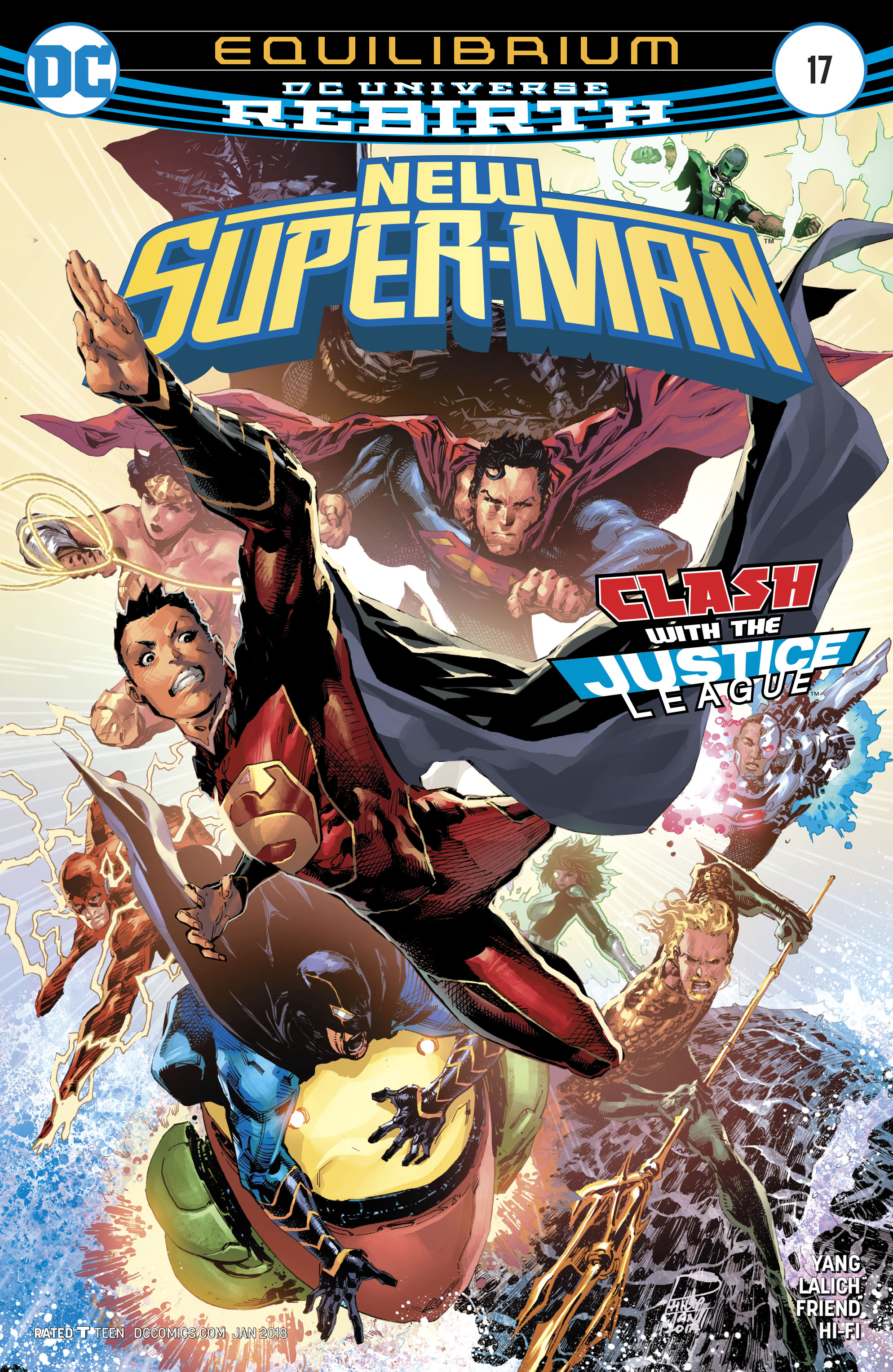 Scheduled to arrive in stores: November 8, 2017

The JLC is confronted by the Justice League. Bat-Man's tech is quickly handled and the two Leagues finally meet. Kenan fills Superman in on the Red Jade Dragon situation while the other Leaguers exchange pleasantries. While the rest of the League members clean up the damage to Metropolis, the Supermen and Robinbot search for the Red Jade Dragon. Using Robinbot's technology, the two Supermen find the object in no time. The object rests in a mansion. Kenan is prepared to break in, only to be confronted by Lex Luthor. Disregarding laws against breaking and entering, Kenan forces his way into Lex's place.

Kenan finds the Red Jade Dragon and unlocks his powers when the All-Yang arrives. Still against becoming Emperor, Kenan attacks and the two battle briefly before All-Yang reveals that he killed I-Ching. Outside, a magic force field surrounds the mansion. When Kenan accessed his powers, he activated the Red Jade Dragon, which acts as a portal to the realm of the demigods.

Story - 4: Aside from the final bits at Lex's mansion, this issue played out almost exactly how I expected. That isn't a bad thing. I had a strong feeling that the two Justice Leagues would get along instead of engaging in some flashy battle. I'd even go so far as to say that their encounter was even more pleasant that I could have hoped for. I particularly loved the Batmen and Wonder Women meeting. Batman giving Bat-Man advice on how to be a better Bat was particularly nice. If I had to make a complaint, I would have liked for the two Leagues to have been a bit more present, especially considering that this is their first encounter.

Regardless, the story progresses nicely with plenty of callbacks to previous events and a continuous compounding of intrigue. What's the secret power that Kenan unlocked? What does the opening of this realm of demigods mean for our characters? Will the power of the Red Jade Dragon corrupt Kenan? I'm excited to know the answers, and that is the mark of quality storytelling.

Art - 3: For the most part, the art is pretty solid. There are some wonderful images present here. Unfortunately, the issue gets off to quite a rocky start with faces and bodies looking a bit off. As the issue goes on, the art gets a bit better, but there are quite a number of faces that just look like they could have used a bit of reworking. The bad isn't enough to completely ruin the book for me, but the art is certainly a bit of a mixed bag.

Cover Art - 2: Where do I begin? For starters, the cover is way too crowded. While a meeting of two Leagues is sure to feature a sizable number of characters, the layout makes this cover hard to look at. It's messy and could have been designed much better. The artwork is a bit hard to look at. Faces look off, especially on Kenan. If it weren't for the suit, I'd have no clue I was looking at Super-Man. What's even more shocking is that Philip Tan was partially responsible for the cover. He must have drawn the American League because they are by far the best looking parts of the cover.

Variant Cover Art - 3: Wow, a Chang variant I don't hate. I love the coloring and layout of this cover, but my main complaint about Chang's art is still present: I dislike the way he draws faces. I've grown accustomed to his Kenan, but Superman looks like he just got finished going a few rounds with Mongul. Batman looks fantastic and Wonder Woman looks decent. If this were a bit more polished, I wouldn't mind this being a poster.