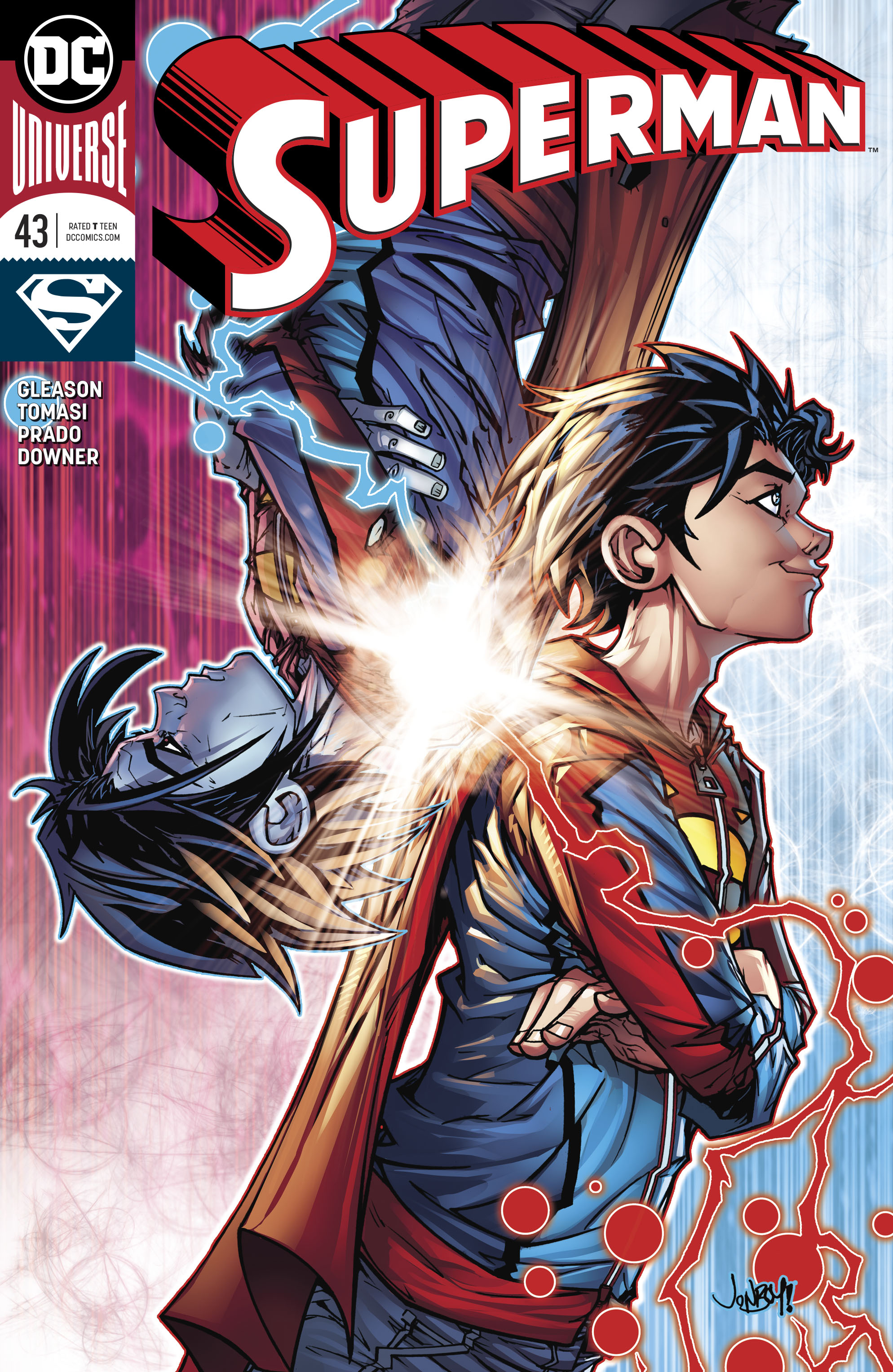 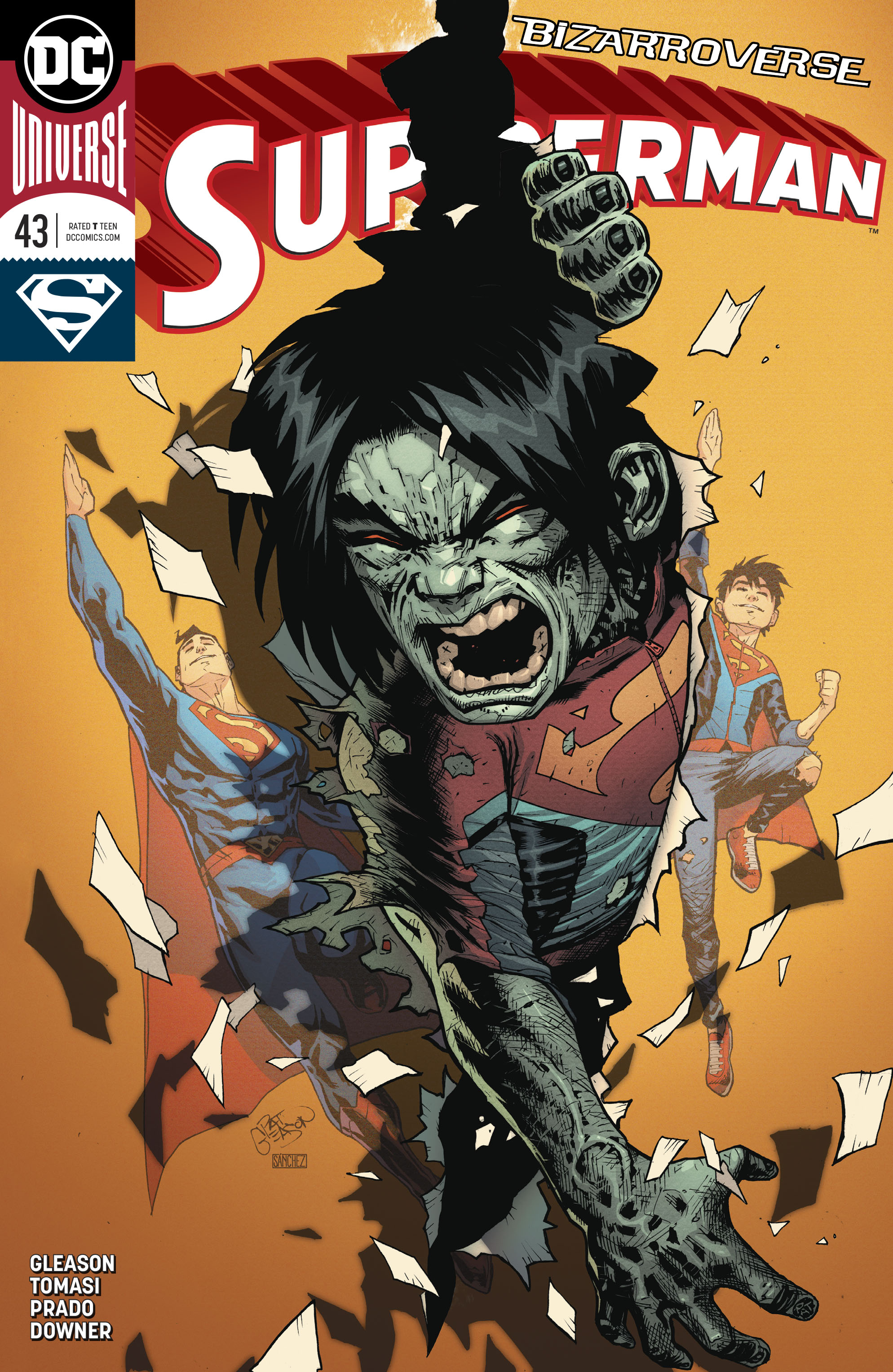 Flashing back a few hours we discover Maya (aka Nobody) has been assigned by Superman to keep watch on Kathy and Jon. As he leaves Kathy reveals she knows Maya is monitoring her and her new identity as Beacon, though keeping her reasons for creating a lab on her farm a secret. As the girls bicker, events play out as last issue and Boyzarro appears chasing his doppelgänger.

As Jon and Boyzarro bond in their own way, Clark receives an update from Maya and races in and takes their confrontation outside. After a little confusion and some property damage everyone seems to be getting along but unbeknownst to them Robzarro and Tiny (Robin & Goliath) have come through the portal searching for their friend and find themselves face to face with Beacon and Nobody!

When Superman arrives, everyone stops roughhousing and it is revealed that something is going wrong on Htrae and their versions of our heroes have begun disappearing. Even more shocking is Boyzarro's revelation that his home life is as opposite to Jonathan's as can be and he is reluctant to return.

Superman vows to protect the boy and the ragtag band all go through to support him.

Loiz is aggressive to Jon and enamored by Superman but things really go awry when Bizarro appears.

Elsewhere the fate of Htrae's missing is revealed as the Legion of Fun set a maniacal plan in motion.

Story - 5: Some of the plot holes from last issue are filled in as a short backtrack fills in some of the problems I had with the storyline. Maya keeping Clark posted on Kathy makes perfect sense now that it is in motion. It was really heart wrenching to see Boyzarro reluctant to return home and as warped as Bizarro's world is I'd always looked at him as tragic or comedic character. The Kent family there is not wholesome or loving at all and that gives poor Boyzarro a much more fleshed out character. It's always interesting to see a writer or artist take on Bizarro and the people of his world so this is a really intriguing storyline. The Legion of Fun's subplot isn't even needed to be honest but it has me keen for next issue.

Art - 4: The art is solid and fun. You can tell that Gleason and Prado have really gone to town this issue with their designs. I can't spoil the ending but it looks like more mind bending stuff is afoot!

If you didn't see Gleason & Mahnke's sketchbook in our feature article do go check it out because it has a few of the character designs and alternate cover art. It is really interesting to see what made it onto the final pages. Also Superman had some fantastic and 'iconic pose' scenes this issue.

Cover Art - 5: I wasn't sure about the cover at first but after reading the issue and seeing the scene by the riverside I'm sold.

Boyzarro broke my heart and I want justice for him. There is no way Superman would let him suffer. Still there is real pain in Boyzarro's eyes here.

Variant Cover Art - 5: I like the reflective aspect of the cover, there is a real ying and yang feel to it and it's fun to look at the detail and flip it round to re-examine it and notice it as a fresh piece each time. It's loud, powerful and visually interesting, just as a cover should be. Meyers has done a great job here.