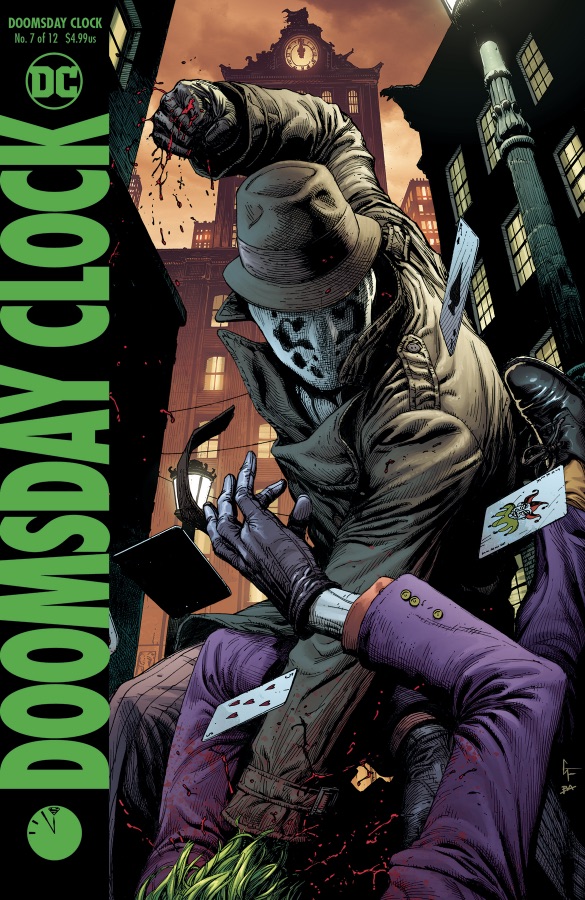 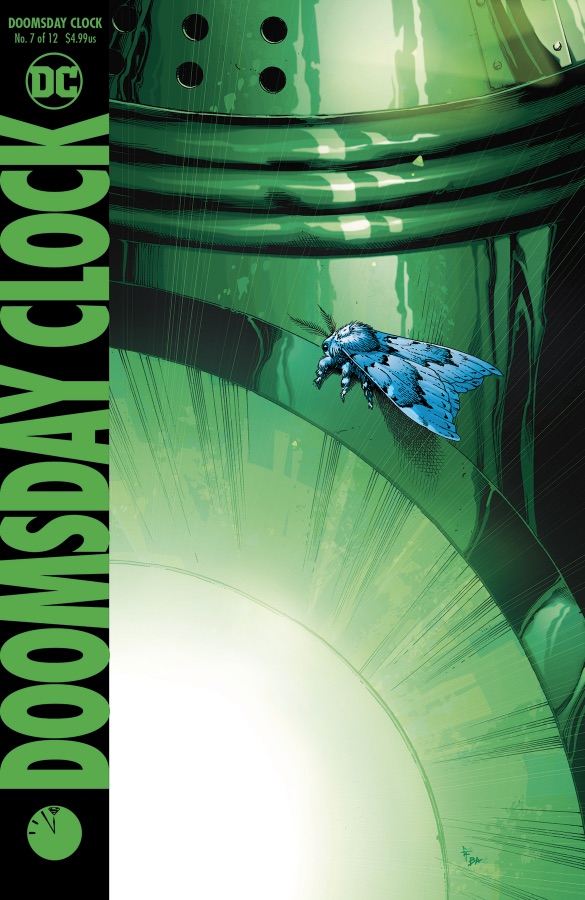 Reviewed by: Keith Samra
Click to enlarge
Our story begins with a recounting of the origin of the original Green Lantern power battery. Narrated by Dr Manhattan, he explains that he moves the Lantern six inches out of his reach, and Alan Scott dies in a tragic train accident, not being able to use its vast power to save himself and become the Golden Age Green Lantern.

We catch up to the present, where Saturn Girl, Johnny Thunder and Rorschach are picked up by Ozymandias in the Owl Ship, and they are taken to where the rest of the cast from the Watchmen universe is currently at.

The Joker is with The Mime and Marionette, and they have The Comedian and Batman tied up in their custody. Marionette starts to torture The Comedian for information as to the whereabouts of Dr Manhattan, when they discover that Batman has managed escape his trappings, and he systematically begins to take them all down.

Ozymandias and the rest of the crew arrive and take control of the situation, and it is revealed that Ozymandias knows of Manhattan's whereabouts, thanks to his trusty pet, which is a homing beacon to Manhattan's power. Dr Manhattan comes out of his hiding place, within the Lantern that would have once belonged to Alan Scott. He reveals that Ozymandias lied, and that he does not have cancer, it was just a ploy for him to use Rorschach to his own ends. He also informs The Mime and Marionette, that she is pregnant with their second child.

Manhattan takes the Watchmen universe characters to a different plane, and tells them that he has discovered what could be his own demise, at the hands of Superman, one month from now. He refuses to help Ozymandias and leaves.

Marionette and The Mime escape with the Lantern, as Rorschach in a rage takes down Ozymandias and the Joker both. Rorschach then realizes that he has been used and discards his mask, and states that "Rorschach is dead".

A broken and beaten Ozymandias makes his way back to the Owl Ship, where he knocks out the waiting Johnny Thunder and Saturn Girl. In his arrogance he claims to have a plan to save everyone, and takes off.

Meanwhile, Reggie no longer Rorschach runs into the streets of Gotham, and posts his journal to Lois Lane, at the Daily Planet.

We close with a confused Dr Manhattan on the surface of Mars, as he thinks to himself, will he be destroyed at the hands of Superman, or will he bring about the destruction of everything.

"Does Superman destroy me? ... Or do I destroy everything?"

Story - 5: What an incredible issue, as we kick off on the second half of this maxi series.

Let me start by saying that I have read all over the net, fans complaining that the delays and solicitation schedule has hurt this series greatly. My opinion on that is, yes it sure hasn't been easy, especially since we live in a "binge culture" world right now. However, it does give you an excuse to go over the previous issue when a new one is released, which for this series is a bit of a boon, as it helps to pick up on threads that Johns is sewn. A good example of this is, Marionette and Mime's baby, as Manhattan revealed he spared her life, when he realized what her child would do, so he chose to save the baby, by sparing her at the time. That left me with the burning question, who is their child, and what does he do?

We are most definitely picking up steam, as we have passed the halfway mark. Though it may have been a little frustrating at times, as Johns built the world around this series, we have finally seen Dr Manhattan proper, and gotten a glimpse of his "influence" on the DCU since he arrived.

In the opening pages we have the Golden Age Green Lanterns origin narrated by Manhattan himself, and right away we learn that through slight movements here and there, how he has almost completely wiped Alan Scott's Superhero career from existence. Let's also not forget that he took Jay Garrick away from history and the hearts and minds of the heroes of Earth.

Which makes you think, in issue #1, Superman has a nightmare of his parents dying in a car accident, did Manhattan influence that event also?

A nice detail by Johns was that he cloned his new pet cat from the remains of his first, where this one is able to sense and locate the presence of Dr Manhattan, and it was rather appropriate that he was hiding out in the Lantern power battery of the Green Lantern that never was due to him.

Ozymandias proved again that he's a manipulative genius, when its revealed he doesn't have cancer after all, and used this ruse to manipulate Reggie as the new Rorschach to help him in his own agenda. It appears that Reggie has abandoned his Rorschach identity, where he will end up next is anyone's guess, though he did get an acknowledgement of wrong doing from Batman. Time will tell, what the fate of Reggie is, though I get the feeling a certain telepath from the future may cross paths with him again before series end.

Speaking of Batman, over the last few issues, he has been practically at the forefront of this series, and he has suffered at the hands of the Watchmen characters and his own rogues gallery, so it was good to see him take down a few of the antagonists. As mentioned above, he admits that he was wrong about Rorschach, which felt good to read him as a more humanized. And let's not forget some of the humor The Joker bought to the issue, especially when he tells Manhattan to cover up his naughty bits.

I wanted to save the best for last, so let's get into the fact that Dr Manhattan can't see the future, past the fact that Superman hits him one month from now, and then everything goes black. Now before we jump to the conclusion of Superman killing Manhattan, we don't actually know that that is what will happen. And more importantly, we have known since the beginning of Rebirth, that Manhattan has been behind a lot of the manipulations in the DCU, and we touched on the possibility of him having the Kent's die in a car accident, surely finding out something like that would drive a man to anger such as we see Superman in Manhattans vision. It's only a small snippet, but seems like that we will see a major showdown between Superman and the good Doctor.

Though I have not enjoyed all of the decisions Johns has made regarding Superman, whenever he has written him, I must however admit, that Johns knows how to write Superman with respect and awe in the world he inhabits.

I have enjoyed this series so far, and still look forward to the next issue, I believe that Johns really has put his heart and soul into this book, and as I've said many times, he has perfectly captured the tone of Watchmen, and it has been interesting seeing them interact with the characters of our universe, looking forward to reading the second half of this series, and seeing what else Dr Manhattan has been messing with.

Art - 5: Gary Frank continues to provide the most stellar art anyone could ask for with this series. Throughout this issue we have the standard nine panel grid, but Frank manages to break that every few pages, and provide us with a wide panel shot for the very important or dramatic scenes. For instance, the first reveal of Dr Manhattan in his series proper, as he is drawn out of Alan Scott's power battery. Also I know that some of the readers are uncomfortable with the nudity from the original series, and yes, Manhattan is nude in this series also, but it's treated in a way that isn't in your face or drawn attention to. And the necessity of it would be to keep in one with the original series.

I loved the opening page, where the history of Alan Scott's power battery is retold, Frank manages to this so eloquently, coupled with Johns words, it is certainly a great marriage between the writing and art.

Another page I really enjoyed was the one with all the news reports of heroes over the world, this was a great montage of old and almost forgotten heroes, such as Celsius and Geo-Force. Even Samurai from the Super Friends makes an appearance, and Frank manages to render them excellently.

Frank has a good handle on Batman, and his action scenes were top notch. You could really feel the adrenaline as he took down Marionette and The Mime, and then was bested by The Joker in the end. And speaking of The Joker, the panel where he places the flamethrower between his legs had me in stitches.

Let's not forget the reason why we are here, Superman. We only see our hero for a couple panels at most, but it is clear, that in the end game, Superman will the unstoppable force that shuts down the good Doctor according to his visions. I'm one of the very few that does enjoy the glowing red eyes when Superman is angry, and Frank managed to do that quite effectively in the small panel that follows.

Lastly as usual, Brad Anderson's colors are top notch as usual. They seem muted than most other books on the shelf, which keep the tone of the original.

Cover Art - 5: Before I read the issue, I studied the cover for a good minute. The composition suggests that Dr Manhattan is a fly on the wall, but we all know that he isn't. Regardless, it's great that he is sitting on Alan Scott's lantern... A hero he wiped from existence.