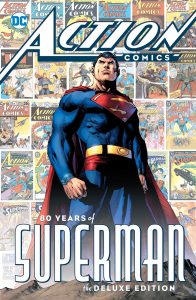 Story - 4: It's hard to believe that we're coming up on the release of the 1,000th issue of Action Comics. It's harder to believe that the character we love and admire so much is about to reach this milestone exactly 80 years to the day that he first appeared. It is, however, easy to see how and why Superman has endured for four-fifths of a century, especially after reading this commemorative companion piece to the landmark issue.

Whenever DC decides to honor the history and legacy of their characters, they have a way of doing it in the most loving way possible. These characters are their bread and butter, after all. This book is no exception. For starters, it's a celebration of Superman and the comic series that started it all. It is very clear that a tremendous amount of time and care was put into assembling this book.

Starting from the very beginning, we're treated to a cleaned-up, respectful reprinting of Action Comics #1's Superman story. The details are small, but upon comparing this version to the version available in the Golden Age Superman Omnibus: Vol. 1, the changes are apparent. Following is the first Zatarra story, also from the first issue. A few assorted stories and an essay or two later, one of the biggest draws of this hardcover appears: the unpublished 1940s Superman story.

The story itself is much like many of the stories from that time period, but the history behind its preservation is certainly interesting. In the essay that precedes it, Marv Wolfman admits that it is likely that the story wasn't even done by Siegel and Shuster due to their use of ghost creators around that time. Then again, the potential of it being a lost Siegel/Shuster Superman story is too good a selling point to pass on. Either way, it's still awesome to have a new story that was hidden away for decades shared with the world.

The rest of the book plays out like a chronological "Greatest Hits" sort of thing. Included are the debuts of Toyman, the Fortress of Solitude, Brainiac, and Supergirl. Also included are the issues containing Supergirl's introduction to the world, the marriage of Superman and Lois from Earth-2, and Clark Kent revealing his secret to Lois in the post-Crisis continuity. Aside from the content included exclusively for this book, a majority of these issues are able to be found in other collected editions. Nevertheless, this is still a respectful sendup to the world's greatest superhero. There is a short Neal Adams Superman/Lex story to finish up the main portion of the book before diving into creator biographies. It's just okay.

There's very little about this book that didn't work for me. Most of my quibbles come down to a few odd choices regarding which issues were included. The first that comes to mind is the inclusion of Toyman's debut. I'm baffled that an arguably C-list Superman villain got a spot in this collection over the Man of Steel's arch enemy, Lex Luthor. Luthor made his debut in Action Comics, so it really just comes off as an odd decision to me.

This next gripe will likely be voiced by anyone who reads this book: the inclusion of the debut stories featuring Zatarra, The Vigilante, and The Human Target. On the one hand, I understand the reason behind their inclusion. These characters also began life in the pages of Action Comics. This book is, after all, a celebration of that very title. Then again, we all know the main attraction is Superman. That isn't to say that I didn't enjoy reading the stories. If anything, I'm hoping that DC will get around to reprinting more of these tales for people to enjoy. But the title of the book clearly states that it's a celebration of the Man of Steel, so...

Regardless of the book's few shortcomings, I highly recommend that any fan purchase a copy. The essays are interesting, the content is all quality, and the art really pops thanks to a gorgeous print job. It's a fitting tribute and it left me with an enormous smile on my face and another reminder why Superman is my absolute favorite character.