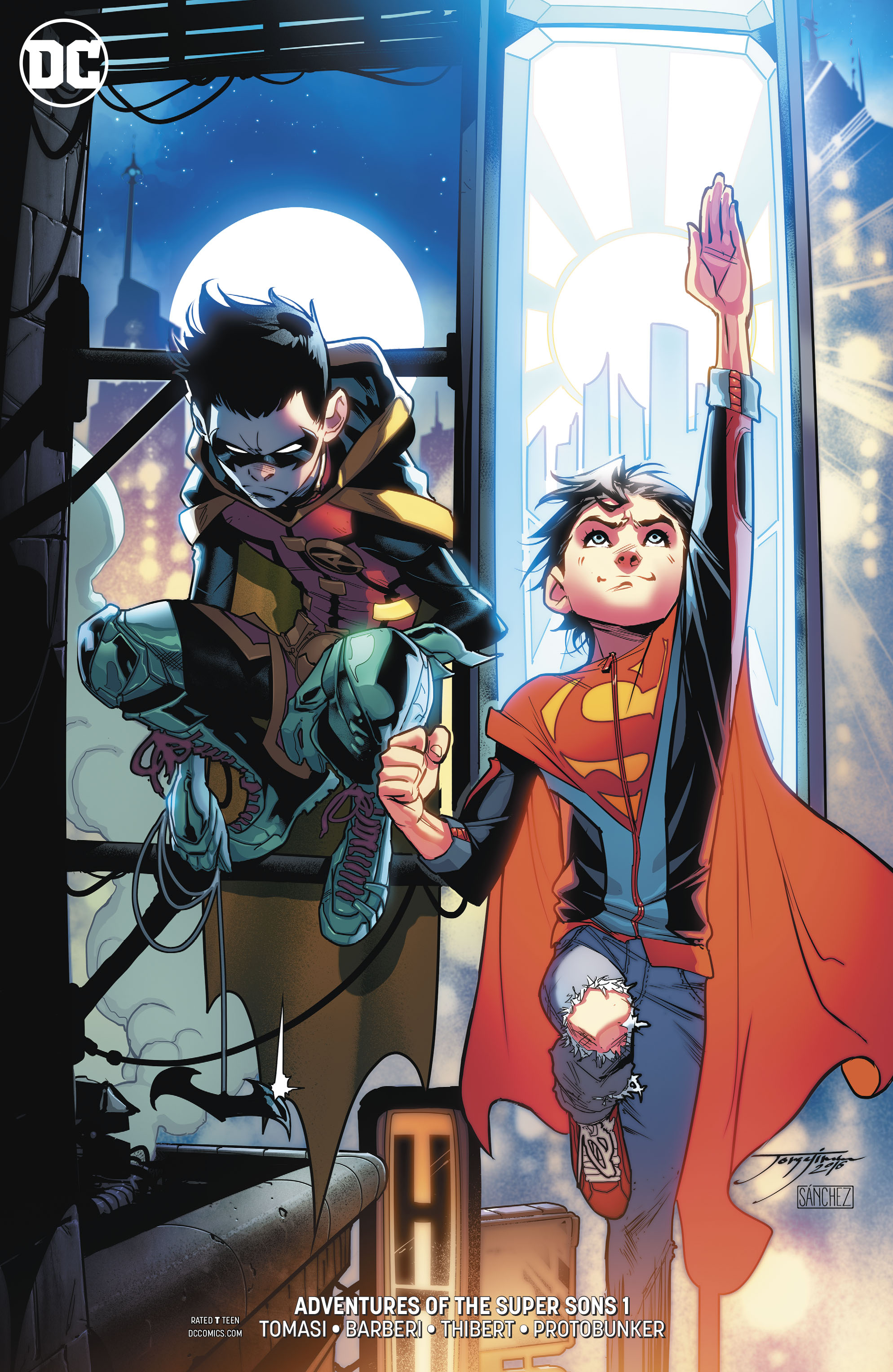 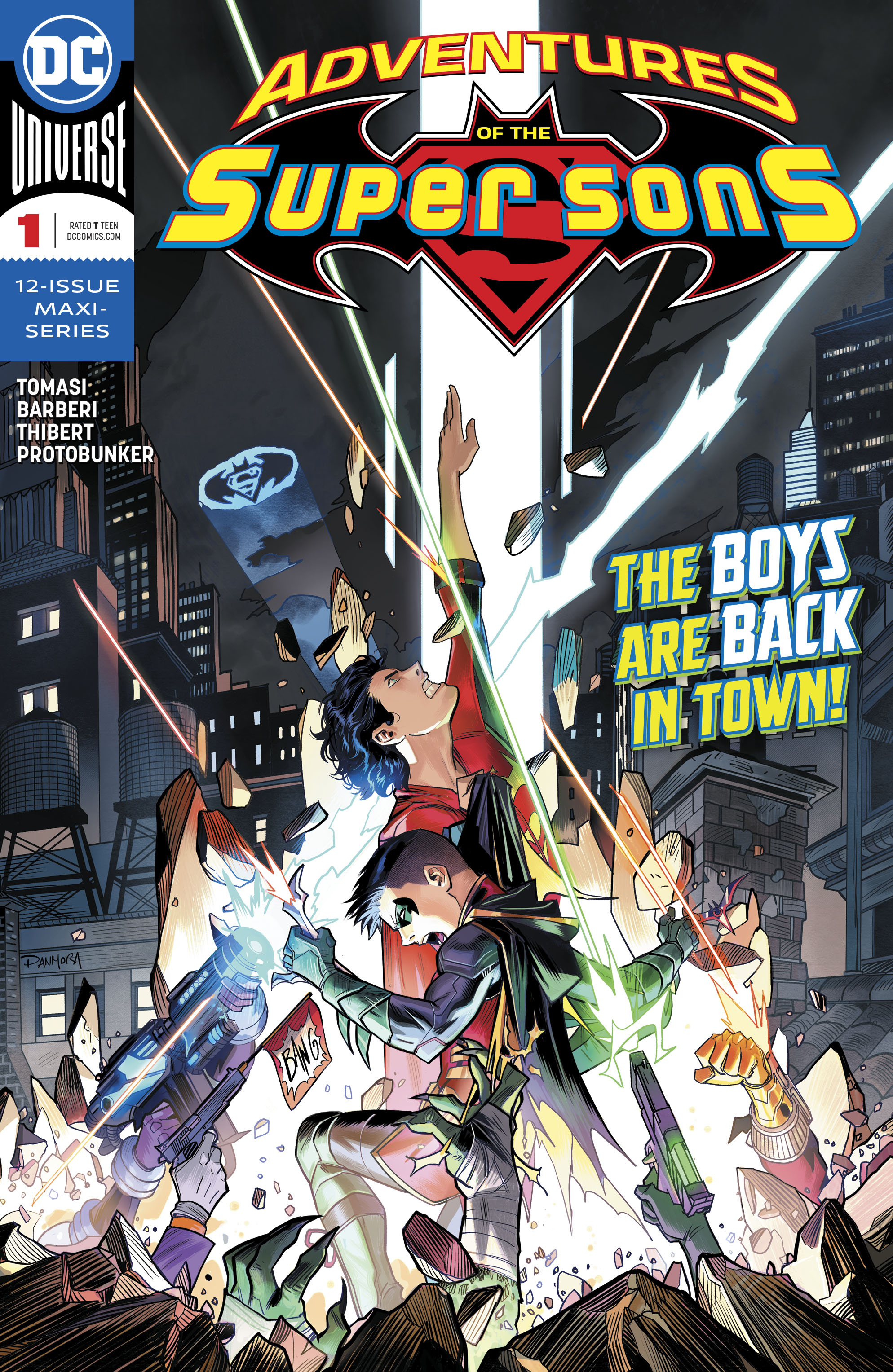 Adventures of the Super Sons #1

We open with the boys fighting the giant Superman statue from Memorial Park. The statue has been bought to life by The Puppeteer. As Jon takes over for Damian fighting the statue, Damian manages to defeat The Puppeteer, and end the conflict.

Later at the West-Reeve, summer vacation starts, the boys are picked up by Alfred. Sometime after that, the boys in their headquarters in Morrison Bay, learn of an attack by a smaller version of the Shaggy Man. When they go to investigate, they discover their latest adversary, as well as a whole lot more, as they are greeted by "The Gang", younger versions of Earth's Super Villains... Shaggy Boy, Ice Princess, Kid Deadshot, Brainiac 6, Joker Jnr. and their leader Rex Luthor.

With Damian tied up, Rex unleashes his secret weapon of Gold Kryptonite, stripping Jon of his powers whilst he is in its vicinity and with a power gauntlet, starts beating Jon mercilessly.

Story - 5: So glad to have this book back, even though it is only for 12 issues. This book has become one of my favorite series, not just from DC, but in general, as a whole. And with Peter J. Tomasi at the writing helm, this book is pure gold.

I love that having gone through the initial on-going series, Tomasi doesn't have to establish the relationship between Jon and Damian. Much like any sequel, we can start atop the building blocks of the first part, and explore further the adventures the boys can and will have.

I loved how we opened with Jon eating popcorn, and watching Damian try and take down the animated statue. The constant banter and the one-upmanship by Damian is what made this book an enjoyable read in the first place, and I am so glad that the quality has remained the same.

The Gang, which is made up of DCU villains that the boys' fathers have tussled with in the past could have been a corny idea, and when you think about it, it kind of still is. It is basically "Silver Age Silliness," however in saying that, Tomasi has managed to tell a story rather coherently, by taking the subject seriously, and managing to keep it light hearted at the same time. This is something that writers wearing nostalgic glasses in the past have tried to do and failed. But I have full confidence that Tomasi will make it fun and exciting.

Looking forward to the next issue, hopefully it will lead to another on-going series, once this one wraps up, and as always, I feel that WB need to make this an animated series in the very near future. Tomasi has proven that he is good at writing for that medium also. Just check out "The Death of Superman" animated movie he adapted and wrote.

Art - 5: Jorge Jimenez helped establish this book, in its initial run, which was later finished by Barberi, who seemed like a natural fit, just as Kerry Gammil took over the art duties on the Superman book, when John Byrne left back in the late 1980s. Barberi's style compliments Jimenez so well, without him losing his own flair for storytelling.

The opening pages were my absolute favorite for this issue. Just the youthful playfulness of Jon's attitude, followed by the mischievous smirk by Damian as he turns The Puppeteers own device against Jon, letting the statue pound on him a bit.

The look of "The Gang" was also handled really well, as the young villains resembled their adult counterparts, with unique traits of their own. I love that Rex was wearing sneakers with his suit. And that Brainiac 6 has no nose.

Aside from the main characters, Barberi excels at backgrounds and props. Just take a look at how he renders vehicles, they look modern and recognizable, without any distinct logos and design traits.

I love Barberi's art, and also love that he is inked by an industry legend in Art Thibert. The inks are sharp and clean, and don't interfere with the dynamics of the pencilled art. Lastly as always, I need to give a shout out to the awesome color art by Protobunker. Though they don't have the same tone and moodiness that Alex Sanchez bought to the table, when Jimenez helmed the art chores, the bright technicolor approach is a nice fit for this book.

Cover Art - 5: Dan Mora provided the cover art, and it excellently captures this issue, with Jon displaying his power, and Damian showcasing his legendary defiance.

The variant is reworked cover by Jorge and Alex, which though still awesome, has already been used in the past.