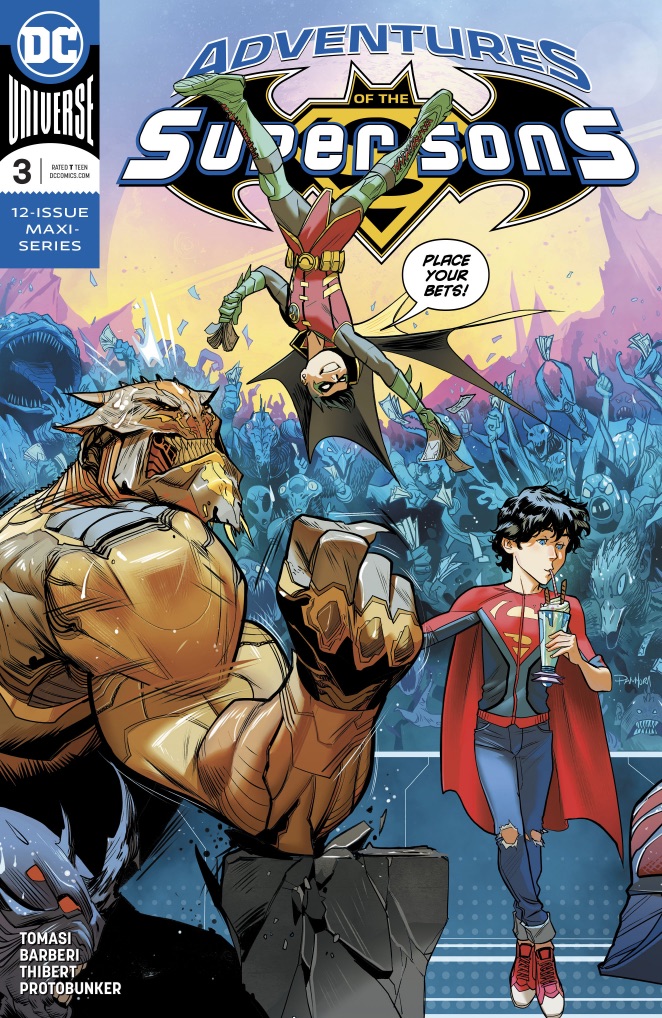 Adventures of the Super Sons #3

Our story picks up where the last issue ended, with Jon being split into two beings, a Superboy Red and a Superboy Blue. Right away, the two Jons hate each other and start on a tirade of insults to one another, with Damien caught in the middle as the level-headed one, who is trying to fight back The Gang as well.

Joker Jnr. who had apparently made his escape in a pod, finds himself shot at and his pod blown up by Kid Deadshot, and just when all seems lost for the young clown, he uses Jon's buckle given to him by Superman, to help himself in the vacuum of space, and then is rescued by a mystery fellow space traveller.

Back on the ship, Damien begins an assault on the bridge of the ship, and takes down Brainiac 6 with ease. Rex Luthor is in hot pursuit of him, but is unsuccessful in taking down the boy wonder. The ship begins to free fall as it nears a planet much like Earth, and the two Superboys put aside their differences and attempt to save the ship and the occupants on it.

They are successful in doing so, but at a cost, as Superboy Blue takes the brunt of the blast of the ship's thrusters, and is barely conscious when Robin and Superboy Red find him.

We end with Rex gloating that he will destroy the boys, as Joker Jnr. turns up to save them, with the help of Space Cabbie.

Story - 5: Tomasi always manages to write a great issue that is engaging from start to end, with this chapter as no exception to that standard. Tomasi's style for this title has been a major throwback to the comics of old, and he has managed to make it work, even when the rest of the industry is in a dark and angst ridden state, fighting to stay popular and relevant. This title really is a breath of light-hearted, fresh air.

There are a lot of fun moments in this issue, non-more so than the constant bickering between the two Superboys. I remember reading the Superman Red and Blue story when it was being done in the main books in the 90s, and this was a great call back to that, but with a much funnier twist. I loved that to the core, both Jons are all about saving lives, even of those that have kidnapped them and tried to kill them, but still manage to find ways to insult one another in the process, whilst also realizing that they are mocking one's own self as they do so.

Damien was the level head in this issue, but still managed show his roots as an assassin/killer in one paragraph, as he said, "Trust me pal, I can be much worse". I've said many times, Tomasi is the best writer when it comes to Damien at DC, even better than Grant Morrison at this stage. He can tell funny stories with him in them, and still manage to keep him rooted in the darkness in which he was born into.

It appears that the boys are now on the alien home world that the Gang came from, and even though the Space Cabbie has shown up to take them home, I have a feeling that they may have an adventure or two on another planet before all is resolved, and once again, what a great way to have a call back to some of the Silver Age silliness from decades ago.

I've given major props to Tomasi here, but he deserves every single one of them. And having referred this title to a friend recently, I told him, that Tomasi is the modern day equivalent of Peter David of the 90s, having a whole range writing styles and many levels of storytelling, cannot recommend this book enough to everyone.

Art - 5: Carlo Barberi has been a worthy successor to Jorge Jimenez, who kicked off the Super Sons title when it was first introduced, and Barberi has managed to make it completely his own, whilst keeping in Jimenez style and character designs.

Really loved the kinetic flow of the storytelling, and the way he panels each page, making sure there is no lag in the story telling whatsoever. Just look at the five pages from when Robin makes his escape to the bridge, to when he's fighting Brainiac 6 and Rex (pages 11-15), the flow of the story is not interrupted at all, and we still manage to see what happens with the rest of the occupants of the ship, mainly both Superboy's as they save the rest of The Gang from being sucked into space.

Absolutely love the individual shots of the characters scattered throughout the book, like Superboy Blue with his red smoky eyes as he melts the ice Robin and Red were trapped in. The grinning Joker Jnr. floating in space before he is saved by Space Cabbie and the flying shots of Superboy's Red and Blue as they parallel one another saving the Gang and helping save the crashing ship. Art is 60% if not more of a comic, so good art goes a long way in the enjoyment of greatly written book. This is why this book is a 10/10 for me.

And as usual, Protobunker has done an astonishing job coloring this book, giving it vividness and vibrancy.

Cover Art - 5: Though not what happens in the book directly, I love the cover of the arm wrestling match between Superboy and a giant alien. It looks so much like a Ryan Ottley drawing, I have to keep looking for credits to make sure it is actually Dan Mora that is doing the covers.

Also love the homage to the new Captain Marvel/Shazam! movie poster, with Superboy drinking a Slurpee.