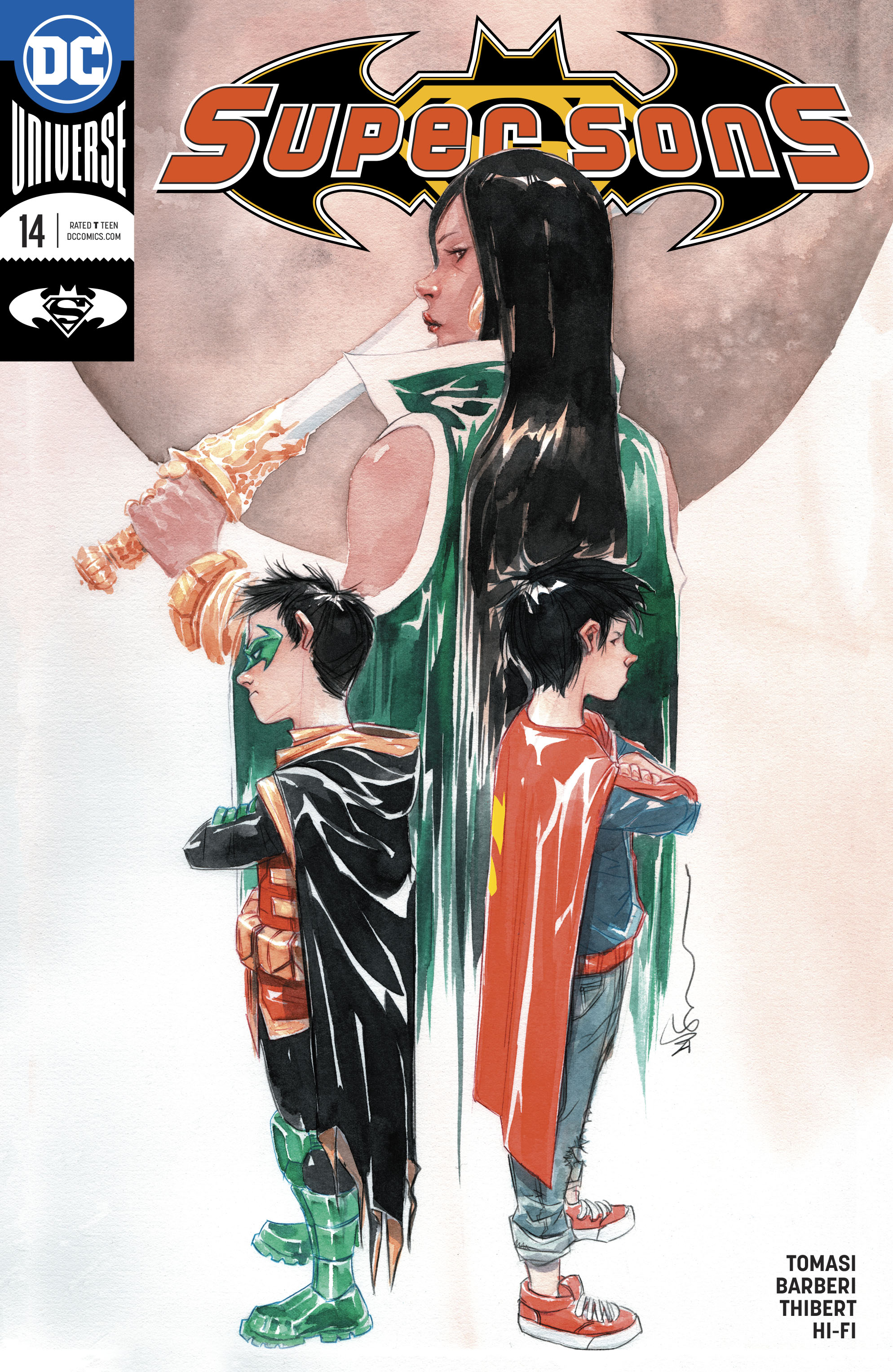 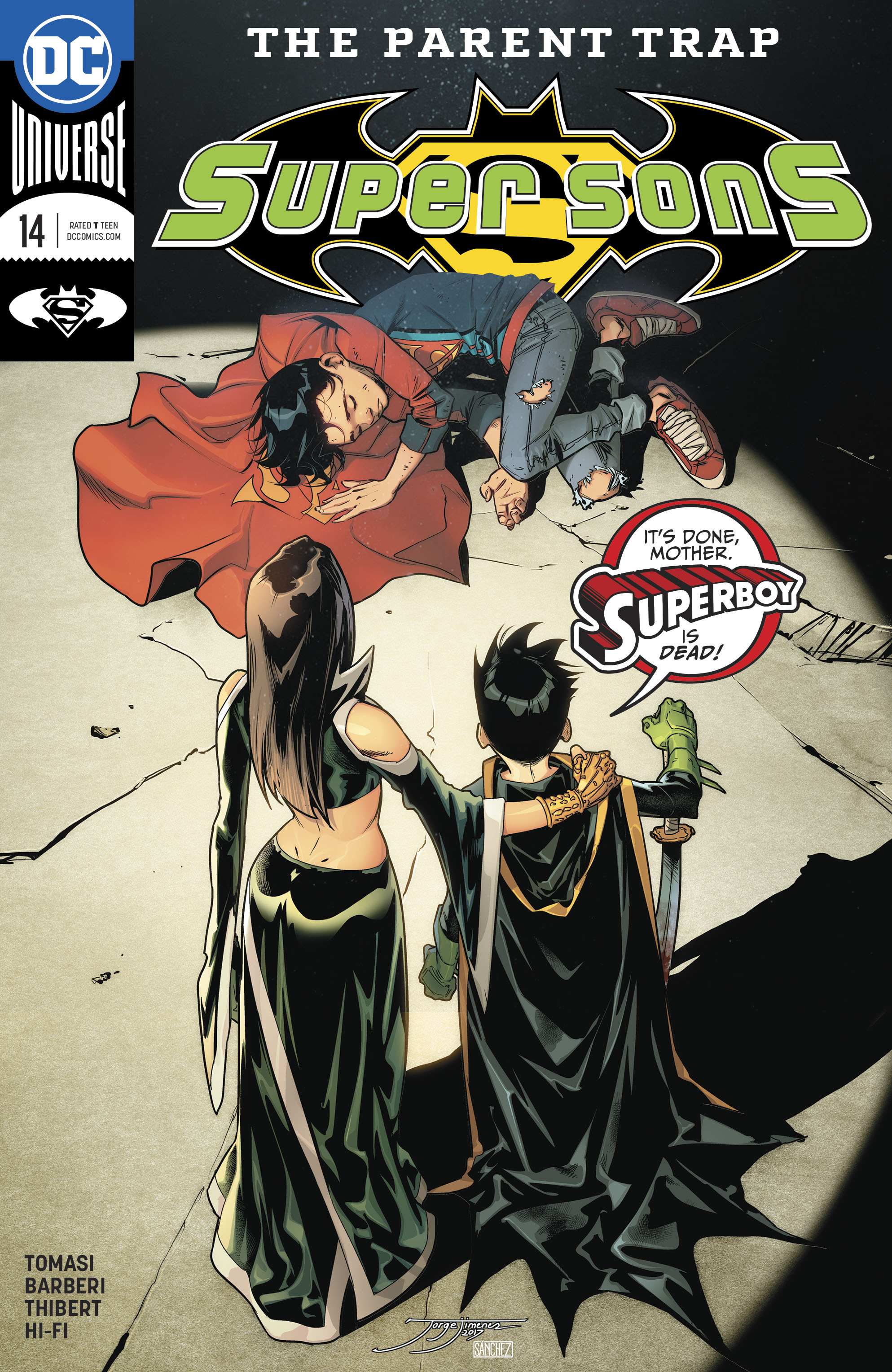 Reviewed by: Keith Samra
Click to enlarge
We open with Lois in Gotham City, conducting an interview, with Superboy and Robin in a mad rush to get to her before Talia Al Ghul assassinates her. They arrive in the nick of time, and Jon manages to catch the bullet that Talia fires at Lois. Damien challenges his mother to a duel, while Jon takes care of the League of Assassin ninjas, sent to finish off Lois. Damien defeats his mother, and tells her to stay away from now on. We end with the boys walking of discussing Jon's desire to be trained as a ninja.

Story - 5: Tomasi is one of my favorite writers in the entire industry, and he never fails to deliver with this book. I absolutely loved this two issue story arc, and the character development of not just the boys, but also Talia as well. In the past I stated that Tomasi has done more for the character of Damien, save Grant Morrison, just as he has done the same for Jon this side of Jurgens himself. But that also extends to their parents also, specifically their mothers. Over in Superman, Tomasi wrote a Lois that is faithful to her character's essence, but also wrote her as a strong mother (and wife), and here in these couple of issues, he wrote Talia as a rather methodical (in a twisted way) teacher, over a caring nurturing mother like Lois is. As the daughter of Ras Al Ghul, she would be nothing else, so again, he stayed true to her essence, and I wouldn't have wanted it any other way.

I love the way Talia continually pushed Damien to see where his loyalties lay. And whether he still is the killing machine she wanted him and trained him to be.

Jon had great comedic timing, in the way he handled protecting Lois, and trying to hide his secret from Chloe (Lois' interviewee).

The big pay off was at the end for me, when Damien, though still a jerk, chooses to hang with Jon, instead of flying off and brooding. This is a great example of character development. Makes me really sad that this book is coming to an end, as I loved the way Tomasi handled these two characters, making them continually evolve.

Looking forward to the next issue, with the return of Kid Amazo.

Art - 5: Carlo Barberi has handled this book over the last two issues with nothing but care. His style really fits the tone spectacularly.

The fact that he has a much more animated/cartoonish style, gives a very youthful feel to the characters and the narrative alike. The best example is when Jon catches the bullet aimed at Lois. His reaction to the impact of the bullet to his hand is hilarious and also somewhat real. A bullet would be hot and sting, if you had the power to stop one.

The fight choreography between Damien and Talia is quite fun also. Though a bit more serious in tone, it was great to see some Martial Arts from these two. Often times many artist don't go into as much detail, so it is very appreciated here.

Barberi also draws a very attractive Lois, as well as Talia. I love the way he can make Lois' hairstyle work. However they do almost appear as youthful as Jon and Damien, which can just be chalked down to Barberi's animated style.

What I loved most was the way the boys interacted with one another. Barberi managed to capture their comfortability with one another very well in their body language. Some may say I look too much into the art at times, but in all honesty, it makes for a better reading experience when an artist really "gets" the characters he or she is drawing. I love the way Jon floats around and the way Damien moves around, ready to strike.

I became a fan of Barberi back when he filled in a few issues here and there for the 90s Young Justice series. He was a good fit then for that book, and doesn't seem to have lost a step since.

Gabe Eltaeb gave us a very polished technicolor look. Though not as "moody" as Alex Sanchez colors, he did a great job on capturing the time of day, and surrounding vibes of Gotham City.

Cover Art - 5: Though very misleading, it is a great cover by Jorge Jimenez. I love the way Jon is curled up, and Talia holding Damien.

Variant Cover Art - 5: Dustin Nguyen's chase covers have been nothing short of spectacular. The same as the main cover, it is somewhat misleading, but a great composition nonetheless. I love the Talia half turn in the background.