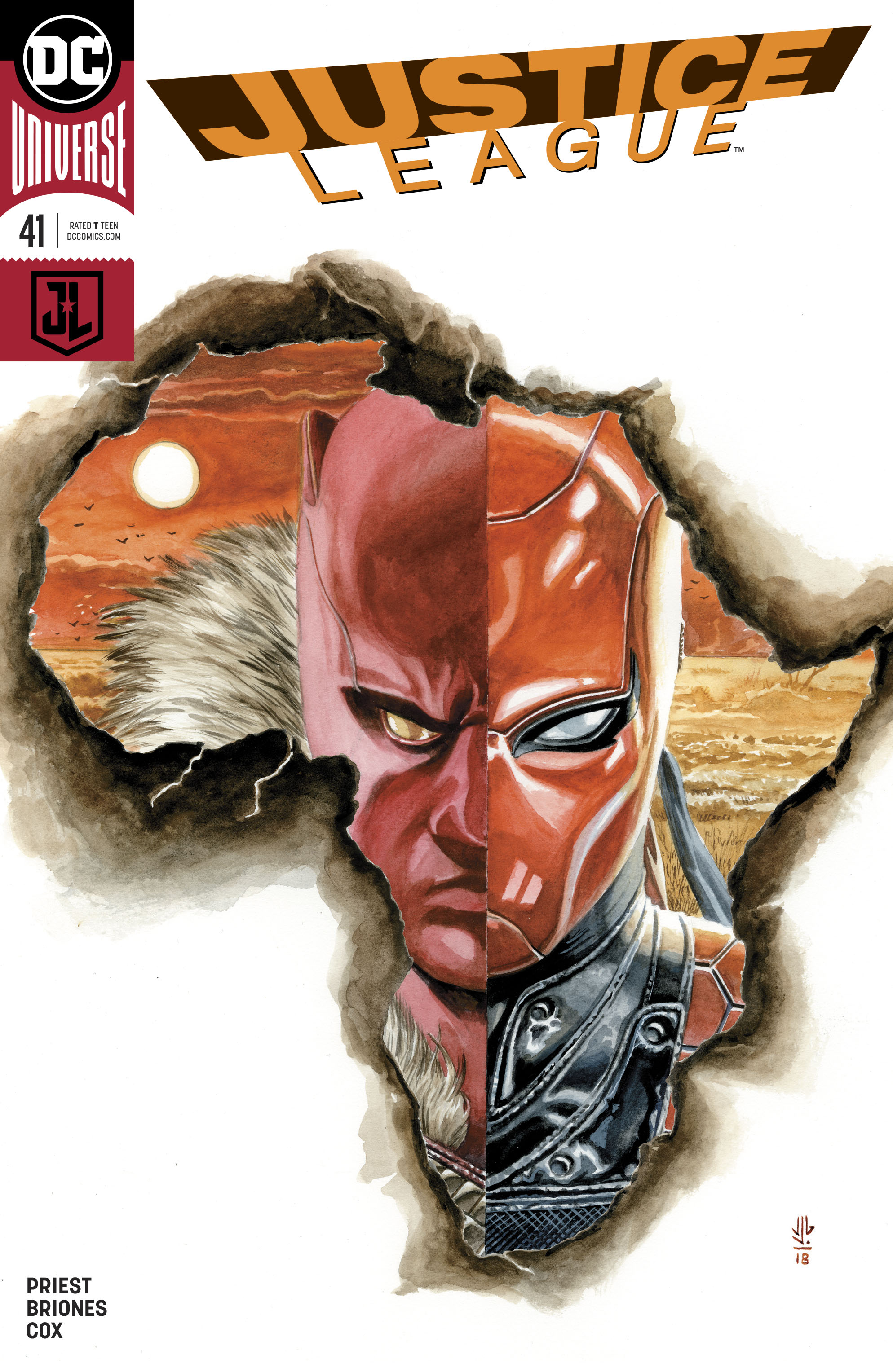 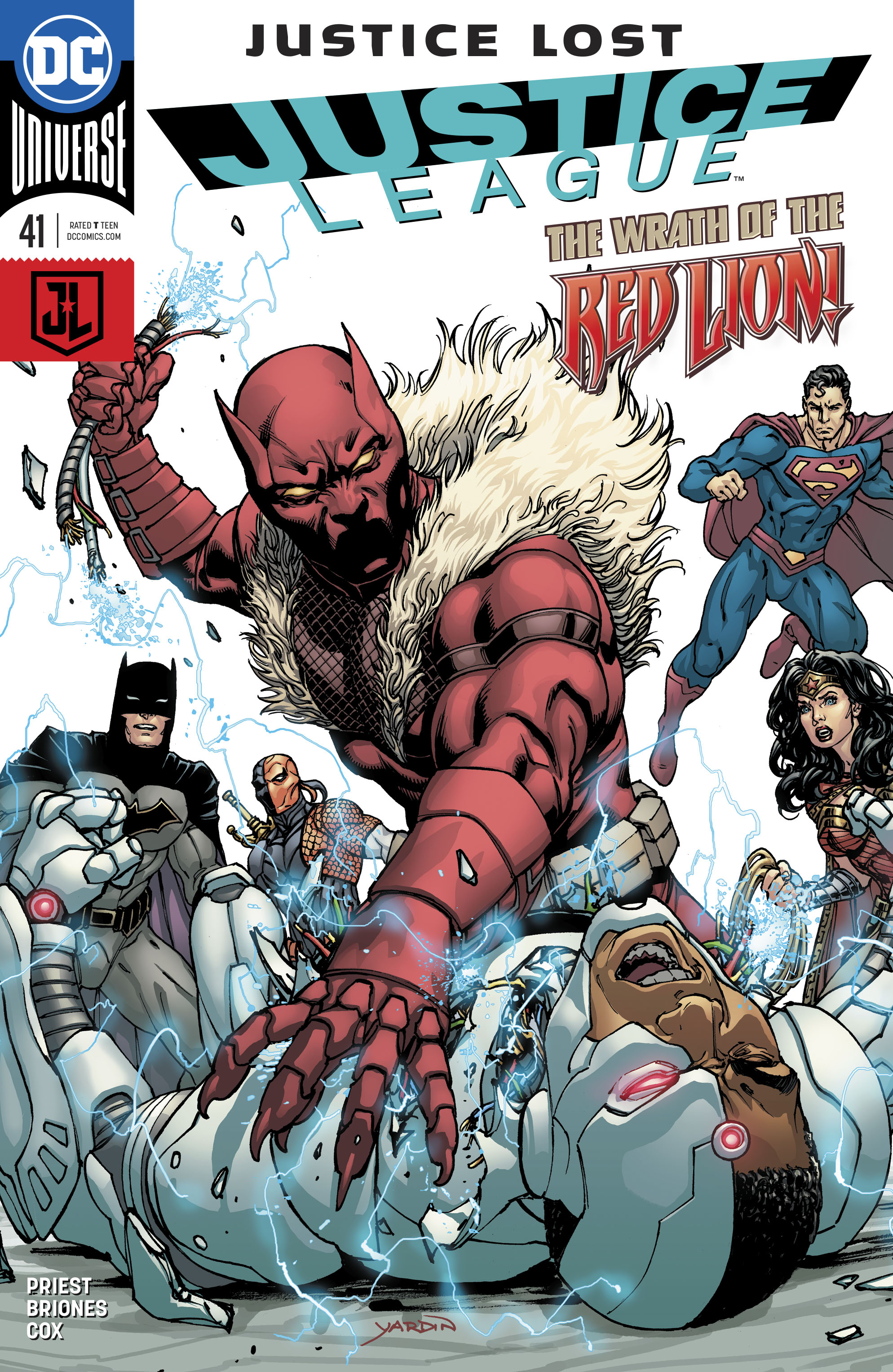 In space, Baz can't stop babbling about his offer from Superman to "Let's grab lunch". He asks Jessica to help him get his mind off it. She replies, "Okay, I kissed Batman." Mission Accomplished. On Earth the tower has crashed in East Africa, Deathstroke tries to talk the Red Tiger out of interfering with the League who are attempting to retrieve their Watchtower.

Batman and his team had apparently left the scene soon after the crash, leaving the Justice League in a standoff with a female named Kamala with an army behind her. Fights break out when the Red Lion jumps in the fray attacking Cyborg. Superman and Wonder Woman do their best to hold off the rioting crowd when another faction enters the fight. Bullets ricochet off of Superman's chest striking Wonder Woman down. A distracted Cyborg falls to the Red Lion as he drags him off.

Aquaman and Batman are looking for the head Fan, Aquaman comes up short, but Batman finds him and takes him out but the Fan says, "Now what? Arrest me? I know everything, I am a problem you can't solve."

Next Issue: A strange place of dying

Story - 5: After an average last issue, Priest is back in full force. This could be the best issue of his run to date. However I have a lot of questions. First: Why is Baz obsessed about his lunch with Superman, and how will Jessica react when she sees Batman again? Two: Slade was trying to get Red Lion to sign his check. Did the Justice League hire him to pay off the Red Lion to not get involved? Third: Is it safe to assume that everyone survived the crash, because we never even see Batman's team in this issue? Forth: Is Batman back on the team as he is working with Arthur looking for the leader of the Fan? Fifth: What is the current state of Wonder Woman's health? She can't be dead, yet the blood on her body looks very convincing. Great job on the art this issue, speaking of art...

Art - 5: The art in the book is great, I for one am glad to see that Woods is again taking a break from the book. The two page splash of the tower in the desert is stunning. Briones handles crowds well, and that's a good thing as there is a lot of nameless and faceless people in this book. Speaking of faceless, I am usually not a fan of non-detailed characters but the images of Superman hovering above ground on page 6 fit perfectly in this book. I also have to give a shout out to Jeromy Cox as the colors in this book really help the art shine.

Cover Art - 4: A good looking cover but it has its flaws. The focus of the cover is obviously Red Lion and Cyborg, and these two characters look great, it's the background characters that in my opinion could use a little more detail.

Variant Cover Art - 5: I saw this cover and it looked good, but before I read the title, it had no meaning. After I read the book, this is the cover I wish I would have grabbed. The simple image of the Red Lion's face in the continent of Africa is so fitting for the story inside.