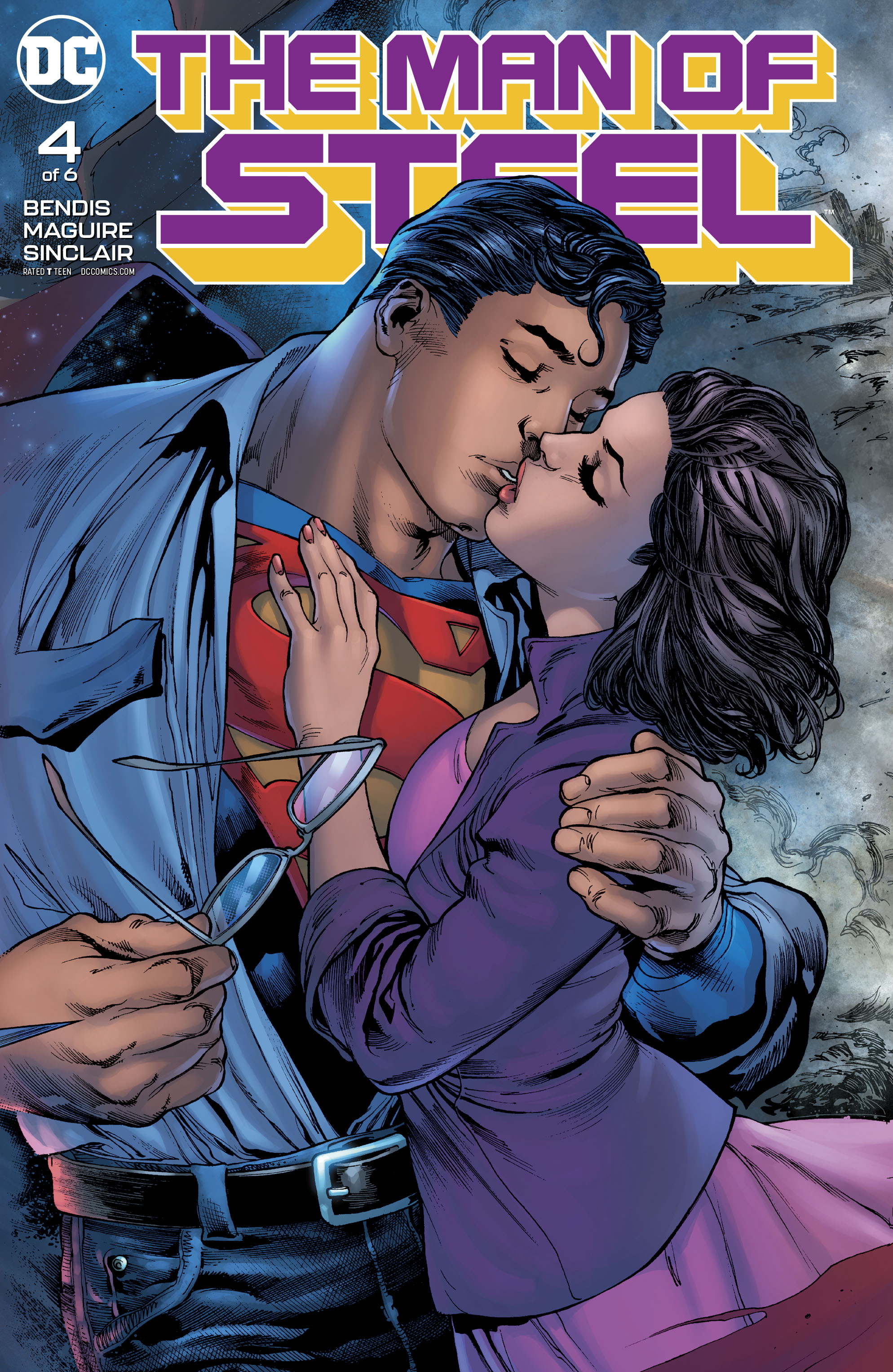 Reviewed by: Keith Samra
Click to enlarge
Our issue begins with Superman and Supergirl taking the fight to Rogol Zaar. The Kryptonian cousins try and make quick work of their foe, as Supergirl takes the lead. The battle causes some damage around the city, to which Superman makes sure to keep bystanders safe from.

Rogol Zaar manages to show Superman that he isn't a mere pushover as he attacks him, knocking him across the city. Over at the Daily Planet building, Perry, Jimmy and Robinson look on as the two battle across the sky, and prepare their report of the events.

Rogol manages to get in a few good hits, and sends Superman flying, as he loses consciousness. Whilst unconscious, Superman's mind wanders back to the night that things changed for him and his family, as the mysterious figure in the bug-like ship that appeared in their apartment is revealed to be non other than Mr Oz/Jor-El, and he asks Jon to go with him.

Superman regains consciousness, and discovers that his Justice League teammate and friend Hal Jordan has shown up on the scene, and is trying to get information as to what happened. He talks to Superman when he realizes he's awake, and tells him he can't find any trace of Rogol Zaar, nor can he give him any information as to who or where he has come from.

Superman thinks back to what Rogol Zaar said to him during the battle, "Cleanse the galaxy of the Kryptonian plague". Superman briefly speaks to Supergirl before she takes off to find Rogol Zaar. Hal Jordan protests to Supergirl being on her own, with someone so powerful out there hunting Kryptonians. He asks Superman, "Where's your son?"...

Later Superman arrives back at his Fortress, he hears a voice ask him why he has returned, and realizes it's none other than Rogol. Superman questions Rogol, about his connection to his father Jor-El, to which Rogol continues to question Superman if he has procreated with any humans, if he has any offspring? Superman tells him he's figured him out, and we end with Superman unleashing his heat vision, decimating what's left of the Fortress of Solitude.

Story - 4: Well written by Bendis, but was this issue necessary? Do not get me wrong, I did enjoy reading it, but there is very little story to the issue. There was a fight with Rogol Zaar, Superman gets knocked out for a bit and then he heads to the Fortress. This actually could have fit within the previous issue, instead of being decompressed this way, taking up an entire issue.

Superman and Supergirl have now come face to face with their adversary, and it's a basic slug fest from there for a few pages. One that ends a little too soon, with little impact. As I stated, Bendis has written it very well, but it's like serving only a baked potato for dinner, without much else. That potato is spread thin across the plate. Even the Green Lantern cameo served as not much else, other than exposition. Surely Hal could have been a little more useful in the matter, but Bendis is trying to set up Rogol as a complete mystery and major power house, much in the same vein as Doomsday. Also Rogol seems to have known Jor-El on a personal level, which is appropriate, seeing as Jor-El plays a part in this chapter, more on that later.

I also couldn't help but feel that Bendis was trying to write a commentary on the Man of Steel film, by keeping the "destruction" to a minimum, and Superman thinking and moving the battle elsewhere. Again, I want to reiterate, I did enjoy the way Bendis wrote the issue, but I can't help but feel disappointment at the lack of content in this chapter. Hence why I gave it a lower grade.

However, rather than being negative, what I did enjoy, was the saving grace of this issue for me, which was more on the Lois and Jon mystery. Finally we learn who the mystery man in the bug-like ship is, that came to Clark and Lois' apartment. None other than Mr Oz/Jor-El. This caught me by surprise, as I really wouldn't have expected Bendis to use this character so soon in his run. The Mr Oz/Jor-El story line never really played out its full course in my opinion, so I'm actually glad that Bendis is picking up this ball and running with it. I suspect that "Grampa El" will take Jon, and Lois will be none too pleased about the decision. Causing a division among the Kent family. Please take my speculation with a grain of salt, I have no insider knowledge, I'm just guessing the way this may play out.

Even though I'm not a fan of this Supergirl, Bendis wrote her well this and last issue. Her emotion toward the destruction of Kandor was understandable and nicely portrayed. She wasn't over-the-top angry as she has been in the past, neither was she a whiny teenage brat either.

The ending left us on a cliffhanger, with what looks to be Clark unleashing all his power via heat vision toward Rogol. I love that we didn't get to see the impact of the attack, just the fallout. This has me thinking, maybe Clark unleashed his solar flare, which would hurt Rogol for sure, but also leave Clark powerless. Some smart writing with Clark figuring out that, in order for Rogol to "cleanse" the Kryptonian problem, he will also have to go after any progeny that one of the two last surviving Kryptonian's may have had.

I am looking forward to the next issue, as I feel it won't be much of a filler. As this issue seemed to feel like.

Art - 5: It has been interesting to see the different artists take on a different issue of this miniseries. As I've stated in the past, I'm not a fan of this practice, as it takes you out of the story. Which is exactly how I felt with this issue. Kevin Maguire has a distinct style, much different to the previous last few issues. However in saying that, I did still love the art for this issue a lot.

Maguire is a favorite artist of mine, specifically because he can do traditional comic book action, and also comedy, which is so very hard to do in this medium, without it becoming slapstick. However, what Maguire excels at, is what he is best known for, which is, his facial expressions. I remember as a kid, reading Wizard Magazine, and studying his tutorial pages through and through.

What Maguire bought to this issue with his art was emotion. Emotion through the facial expressions from his characters, which visually showed the hurt, frustration, determination and undying hope that Superman and Supergirl were going through. The last couple pages alone, show more emotion in Superman's face, regarding Kandor and the loss of Jon, than what Bendis' own writing has only managed to tease and drip feed through the duration of this miniseries so far.

I also loved the way Maguire handled the other characters of the book, from Perry, Jimmy and Robinson, to Hal Jordan. Hal's mask can be tricky to draw for some, but Maguire rendered it rather masterfully.

It's clear that Maguire drew these pages digitally, but it is very masterfully done, and has a wonderful use of grey tone, which is expertly colored over by Alex Sinclair. My only regret is the first page of this issue was a close up of Supergirl's eye, rather than a planet-scape that we have had the previous three issues. Though the last page I feel made up for that, with the bird's eye view of the complete destruction of the Fortress of Solitude at the hands, or rather the eyes of Superman.

I've already mentioned Alex Sinclair's colors, and they continue to be the thread that ties the tone of the art together.

Cover Art - 5: Ivan Reis' covers are simply superb (no pun intended). And I especially love this one of Clark and Lois. It builds anticipation to learning the fate of Lois and Jon.