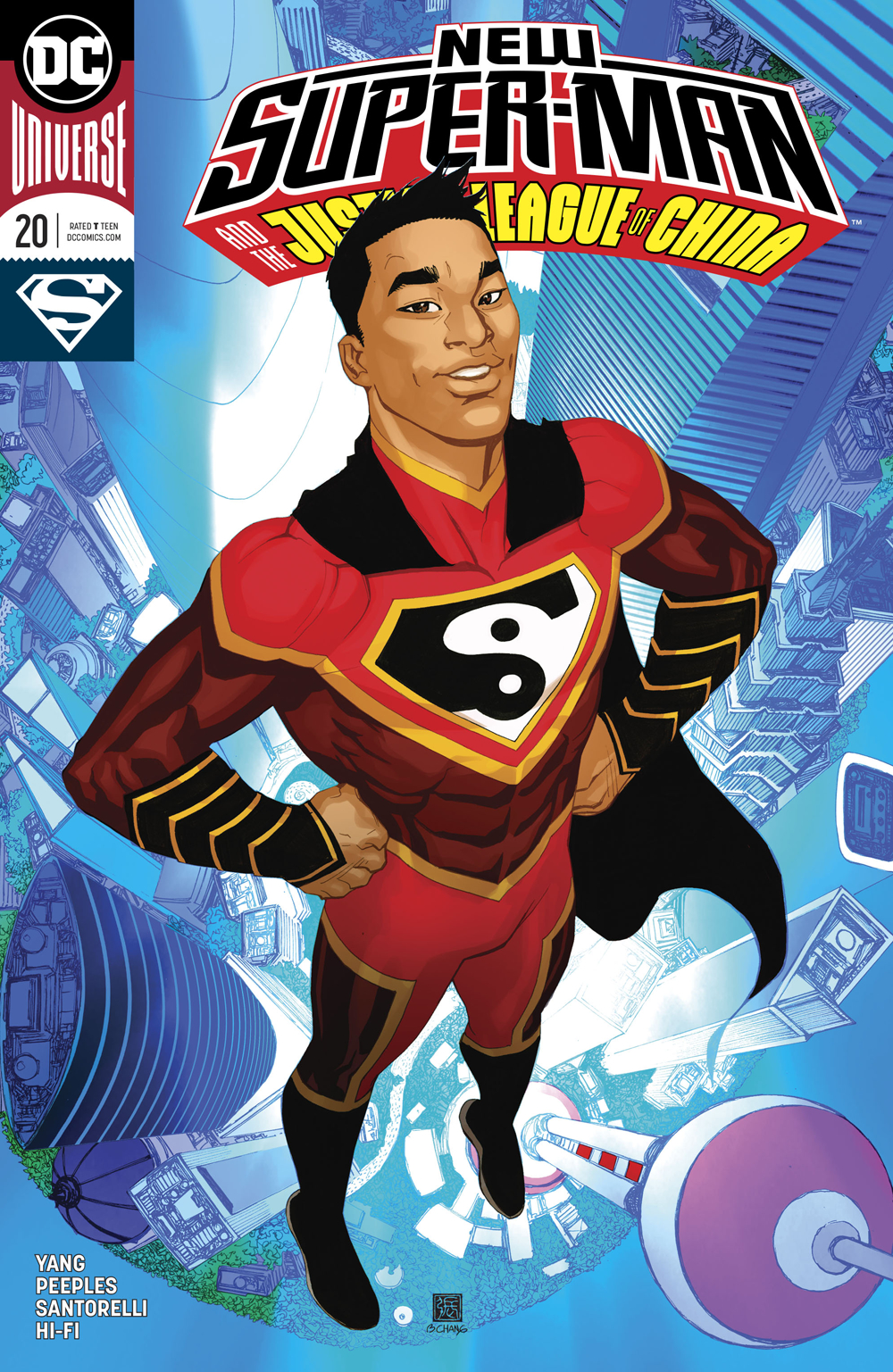 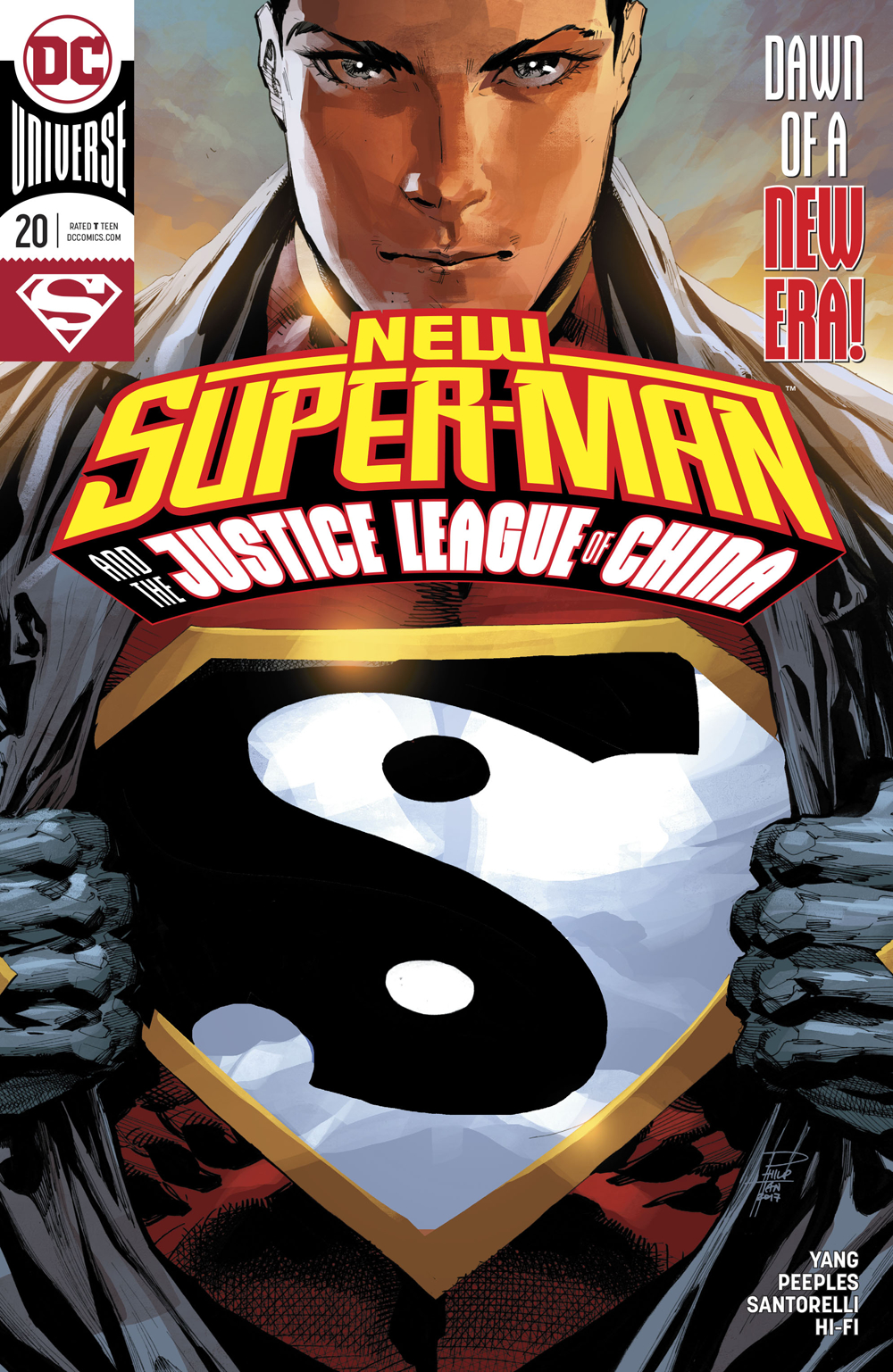 New Super-Man and The Justice League of China #20

At the new JLC headquarters, Kenan meditates. His meditation is abruptly ended as Avery interrupts to ask when they can go to the snow festival. Avery had a chance to go earlier with Deilan and Baixi, but since they began dating, they've become nauseatingly cutesy.

Over at the snow festival, Baixi and Deilan discover a being in a panda bear suit sucking energy from children. Deilan removes the panda mask to discover Sleez - an Apocalyptian being who feeds on desires. Elsewhere at North Korea's Rajin University of Marine Transport, a student by the name of Ahn Kwang-Jo is taken into custody by government officials. Kwang-Jo begins sweating profusely as he is escorted out of the lecture hall.

Kenan and Avery are summoned and the team jumps into action. Sleez begins absorbing Kenan's desires, but is quickly knocked out by a punch unlike Kenan has ever thrown. As soon as Sleez is subdued, the Lantern Corps of China arrives to take Sleez and the JLC into custody. At a classified location, Kwang-Jo is interrogated by the government officials, about a television capable of receiving transmissions from across North Korea's border - something which is apparently a serious offense. Kwang-Jo admits to using the television to watch The Simpsons before he is brutally beaten. As he is beaten, water pours out of his body and begins to cover the floor.

Back at the snow festival, the Lantern Corp of China prepares to take in the JLC. An emerald construct surrounds Avery, but is quickly destroyed by Kenan. The two share an unplanned kiss before the team flees. In the interrogation room, a giant crustacean begins to emerge from the water produced by Kwang-Jo.

With the team back at JLC HQ, Robinbot informs Kenan that Sleez has the ability to inflame desires. Kenan returns to his meditation spot where he enters the space between what is and what is not. Master I-Ching tells Kenan that he is afraid of All-Yang as Kenan's powers are now tied to his emotions. Now more than every, it is imperative that Kenan remain in control. Avery once again interrupts to inform Super-Man that there is a new mission. Kenan and Avery discuss the kiss before Avery accidentally reveals her feelings for her teammate.

The team reaches Hunchun - a city on the border of China and North Korea. There, they find two giant monster crabs making their way to China's border.

Story - 4: There's a lot to unpack in this issue. First off, we see the book move away from Kenan and more towards a team dynamic. Not that this wasn't present before this issue, but it's definitely more noticeable here. It just feels like a team book, and with the characters we've been introduced to, I'm all in.

Secondly, we get the use of two more Chinese versions of Leaguers. While we had already been introduced to the Lantern Corps of China in a previous issue, we get to see them in action. I'm interested to see where Yang takes the Ministry's new soldiers. Could they become permanent threats to the JLC? Will they eventually become allies? Only time will tell. Additionally, we have the introduction of who will most certainly become the JLC's Aquaman. However, instead of Kwang-Jo being a Chinese cut and paste of Arthur Curry, we get a fresh take on the water-based hero. I would love to know how he got his powers. Perhaps he's a different type of Atlantean. I mean, we already have aquatelepaths and underwater magicians. Who's to say Atlanteans with Kwang-Jo's abilities don't exist?

Thirdly, I'm not quite sure how to feel about the Kenan/Avery thing. Yeah, Yang has dedicated time to developing their relationship, but with Deilan and Baixi dating, another inter-team romance seems a bit... dumb. I harbor similar feelings for the recent attempts to seemingly pair Simon Baz and Jessica Cruz over in Green Lanterns. The whole concept of heroes on the same team dating feels a bit fan fiction-y to me.

Fourth, it was pretty neat to see Sleez again. Sure, he was only in the book for a couple of pages, but it's been a while since he's shown his ugly mug.

Art - 4: Overall, I really enjoy the artwork here. There are some fantastic pieces, especially the team shots. A few faces look a bit weird and some facial details are omitted in a few panels, but all in all, the book looks great.

Cover Art - 5: I love this cover! For starters, I can't get enough of that redesigned logo. It's so fresh and whoever designed the yin yang Super-Man symbol should feel good about themselves. This is also a great image to kick off a new era for this book. The art is pretty keen, too.