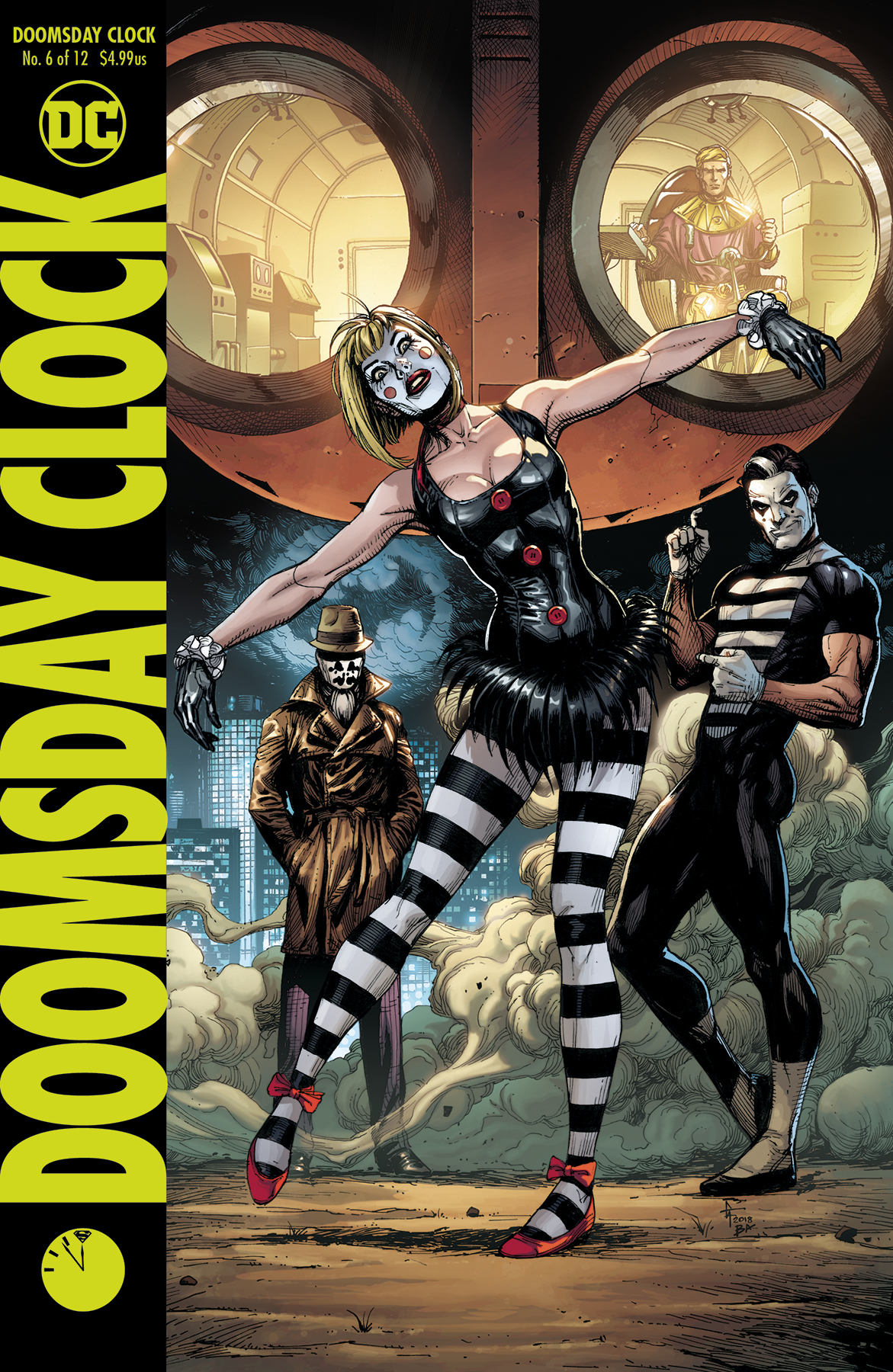 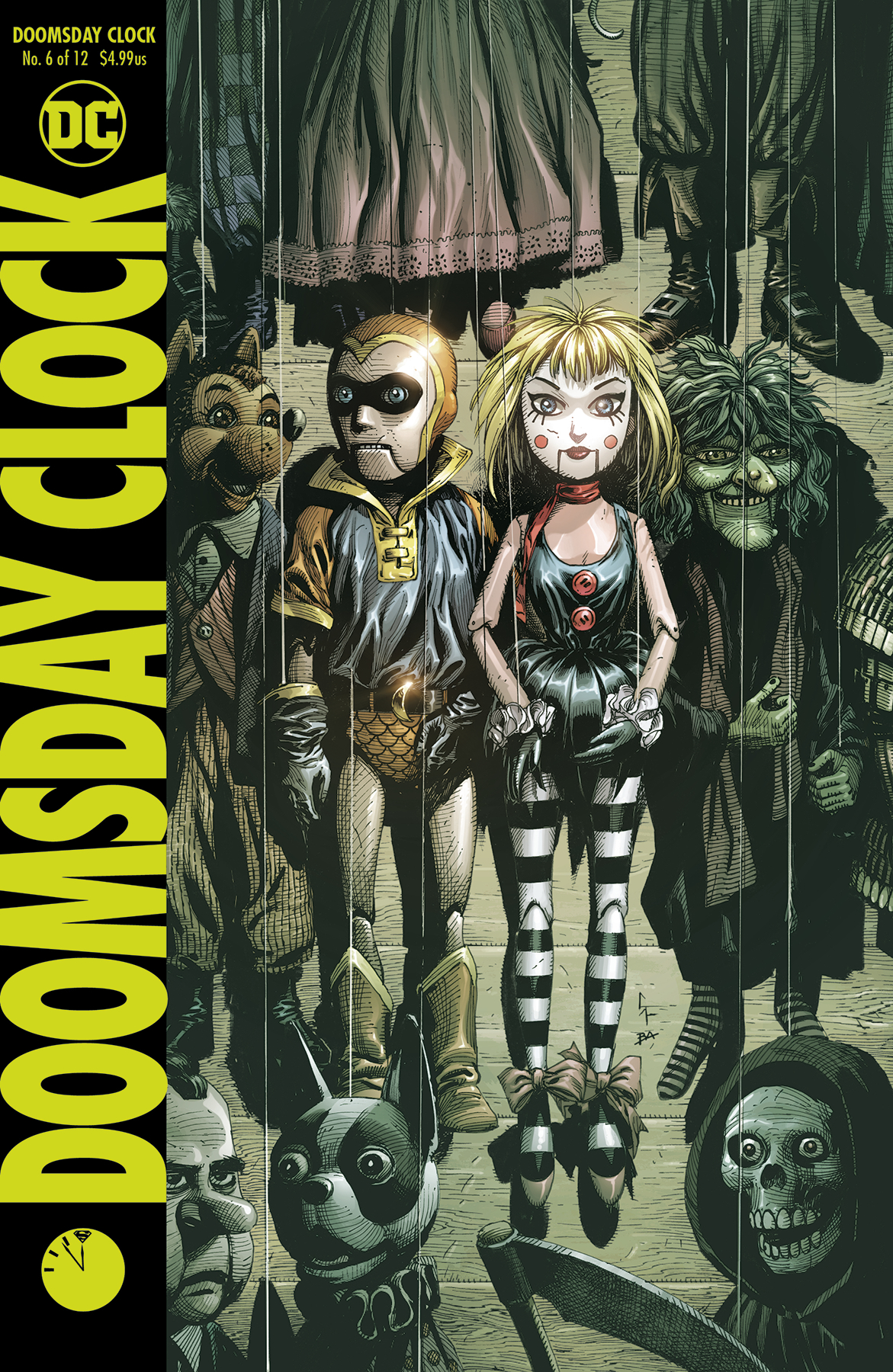 Reviewed by: Keith Samra
Click to enlarge
Our story begins with a flashback to young Marionette's life, we learn her real name to be Erika, and her family consists of just her and her father. Her father is a meek puppet maker who runs a store that sells hand carved marionettes and the sort.

We catch up to the present, where Marionette and her husband The Mime, are in The Joker's custody. Also in his grasp is an unconscious Batman chained to a wheelchair. The duo follows The Joker and his men, as The Clown Prince leads them underground through a series of tunnels, to a destination of a meeting, involving many of Gotham's own and other criminal factions and players.

In another flashback to Erika/Marionette's life, we see her meet her future husband and partner in crime, Marcos aka The Mime. Marcos has always been mute, and his family move into a store across the road from Erika and her father's. He and Erika take an instant shine to one another. When Erika is bullied and attacked by some kids from her school, for being upbeat all the time, Marcos comes to her rescue, and matches violence for violence as the pair take down the small gang of kids, further strengthening their bond together.

In the present, deep in the catacombs of Gotham, we come across a gathering of a secret meeting, led by The Riddler, as they discuss their safety in not just Gotham, but all around the country, thanks to the so called "Superman Theory". A discussion about escaping to the nation of Kandaq ruled by Black Adam is in full effect. Many are unsure of this idea, and raise their concerns, until The Joker makes his presence known. The Joker presents the unconscious Batman to the large gathering, and some question the authenticity of the captured Caped Crusader, while Riddler desperately tries to get the meeting back on track. All of this comes to an end, when they are attacked by The Comedian.

The Comedian shoots several members, including Mr Freeze and The Riddler. The Mime tries to distract The Comedian, in order to protect his wife, and for her to escape. Just before The Comedian is about to shoot him, he is attacked by Giganta.

Marionette and The Mime use the interruption to their advantage, and escape, trying to get as far from the Comedian as possible.

Flashing back to the past, we learn that Marcos' parents weren't too happy with the incident regarding the other kids, and that Erika is considered a bad influence. We also learn that the local police use Erika's father for "un lawful" business transactions. They bully him, and beat him in front of Erika, and tell him they would come after her if he doesn't comply. They had done the same to Marcos' mother across the road. Erika and Marcos don't know how to deal with such a thing, and one day as Erika comes home, she sees her father hanging from the ceiling. He had committed suicide, saying to her in a note that she would be safer without him. When the police see what happened, Erika attacks one of them, and when the other attempts to stop her, he too is attacked, by Marcos. The pair run away together, and resort to a life of crime in order to survive. We see them in their early days as the duo of the Mime and Marionette, we witness the birth of their child, as Erika has her baby taken away from her, and Marcos is incarcerated.

Catching up to the present, Erika reminds Marcos that they had been apart too long on their world, need to stick together, in order to find their baby.

The pair is discovered by The Comedian once again, who tells them that he only needs one of them alive to tell him where Ozymandias is, but before anything can happen, he is electrocuted by the Joker from behind, knocking him unconscious.

We end with Marionette stating that The Comedian would know where Dr Manhattan is, as The Joker takes the Smiley Face pin from The Comedian's chest and pins it to his lapel.

"Dr Manhattan? Who's that? I could use a good dentist. It hurts when I smile" - The Joker.

Story - 5: This is one of the best issues of this series so far. Geoff Johns managed to write a very dark tale about a couple of new characters that really made you want to read more about them. When you strip the story down, it's a contemporary interpretation of Bonny and Clyde, but one that goes deeper into the lives of children affected by crimes against their families. Erika/Marionette is an immigrant whose father was her world, until he is taken from her. The Mime/Marcos is a young boy dealing with a handicap, whose best friend sees past what he is unable to do and protects her, to the point of even sacrificing himself. This is such a deep story, it almost makes you forget that there are other players in this issue as a whole.

The dark side of the tale deals with organized crime and how some immigrants can be caught up in such things in the hope for a better and brighter future, in a land of promise. Erika's father committing suicide, seeing it as his only option for his daughter to have a life that is free, may seem superfluous, but when you think about it, this man most likely suffered from depression and anxiety, leading him to leave behind his daughter in such a way. Maybe I'm looking into it more than I should, but Johns managed to write such a compelling tale, that you can't help but try and fill in the gaps in with your own mind.

The burning question that left me regarding this pair was, where is their baby? What will they do with The Comedian, now that he is in their grasp and finally? And most importantly, will either of them survive by story's end?

I'd actually love to read a mini-series that further explores the life of Erika and Marcos, should Johns ever decide to write one.

Again there is no Superman, save just a mention of the "Superman Theory". Even the Batman is relegated to a guest appearance of nothing short of being a prop for the Joker. Aside from The Mime and Marionette, the only other major player is The Comedian, whose sparse use is perfectly balanced in the flashback and present entwined storytelling.

Geoff Johns has always been a good character writer, especially with his injection of emotion in the antagonists of a story, which is the case for this issue. We see the ego of The Riddler, and the cowardice of Captain Boomerang in their brief appearances, which showcases their very core essence, in no more than 2 panels a piece. Even The Joker's more subdued appearance, served the story well, though I loved the line "did Harley send you to kill me... My birthday is coming up".

I'm excited to see where this story will take us next, though so far, this series hasn't turned out the way I expected, I love what has been offered thus far by Johns and the team. The only downside has been having to wait an entire month for the next installment. Kind of makes you wonder how we had more patience for a story like this in the past.

Art - 5: This won't come as a surprise to anyone, but I love Gary frank's art, and what he has done with the series thus far. I loved the writing in this issue a lot, but I loved the art even more. Without Frank, the issue wouldn't have impacted the way it did. Frank is able to really capture the emotion and drive of the characters in the story and present it to us in a very cinematic and emotional fashion. Just look at the panels that feature Mime and Marionette on the run, living on the streets, and the agony that Marcos feels being separated from his wife as she gives birth, whilst he's incarcerated.

Sticking with the 9 panel grid for the majority of the issue, Frank was able not only tell a cohesive narrative that jumped from past to present, he also managed to show characters like Erika/Marionette from young to old, and still appear as the same person. This is a trait that is very difficult to capture, and in the past, I had mocked the way Frank handled a young lark Kent in the pages of Superman: Secret Origin, however here he did so masterfully.

Another aspect I loved in this issue was Frank's rendition of The Joker. Many artists tackle The Joker in different ways, but I loved the way Frank injected some form of realism into his face, while still managing to keep the psychotic creepiness in his eyes and smile. Only one other artist I feel managed to do this so well, and that is Alex Ross.

The Joker wasn't the only Batman rogue that grabbed my attention, Frank's Riddler bore a great resemblance to actor Frank Gorshin, which I enjoyed immensely. Again, it injected a form of realism into the story, one that keeps in line with the original series, and also the tone of the series as a whole.

Lastly as usual, Brad Anderson's colors are very subdued, but also very impactful. My only complaint would have been that the flashback scenes could have done with some sort of an effect to soften down the boldness of the line work. However, top notch color art.

Cover Art - 5: I like this cover quite a bit. It resonates with the story inside. Frank did a wonderful job of capturing the main players of this story, in such an abstract way.