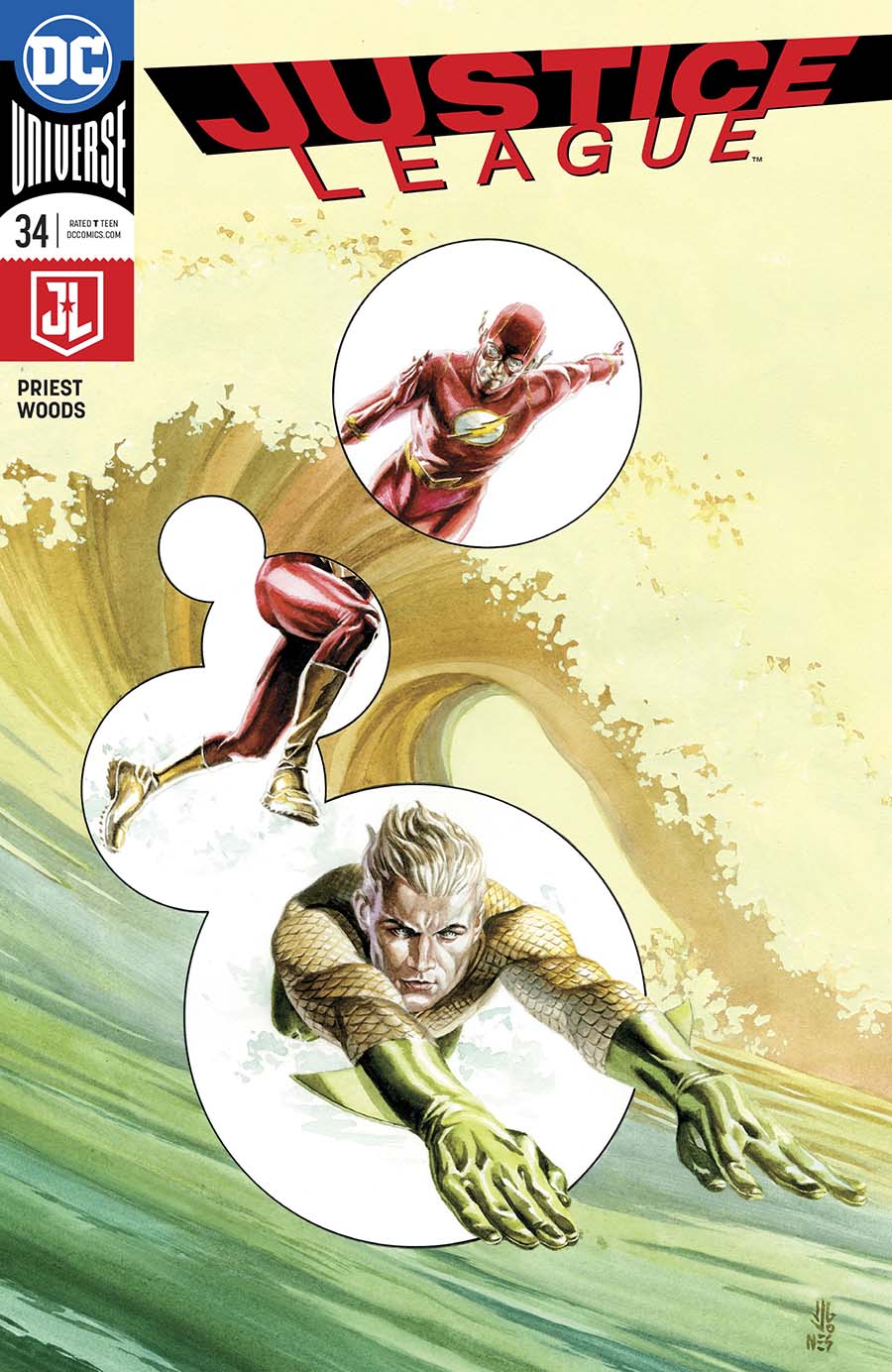 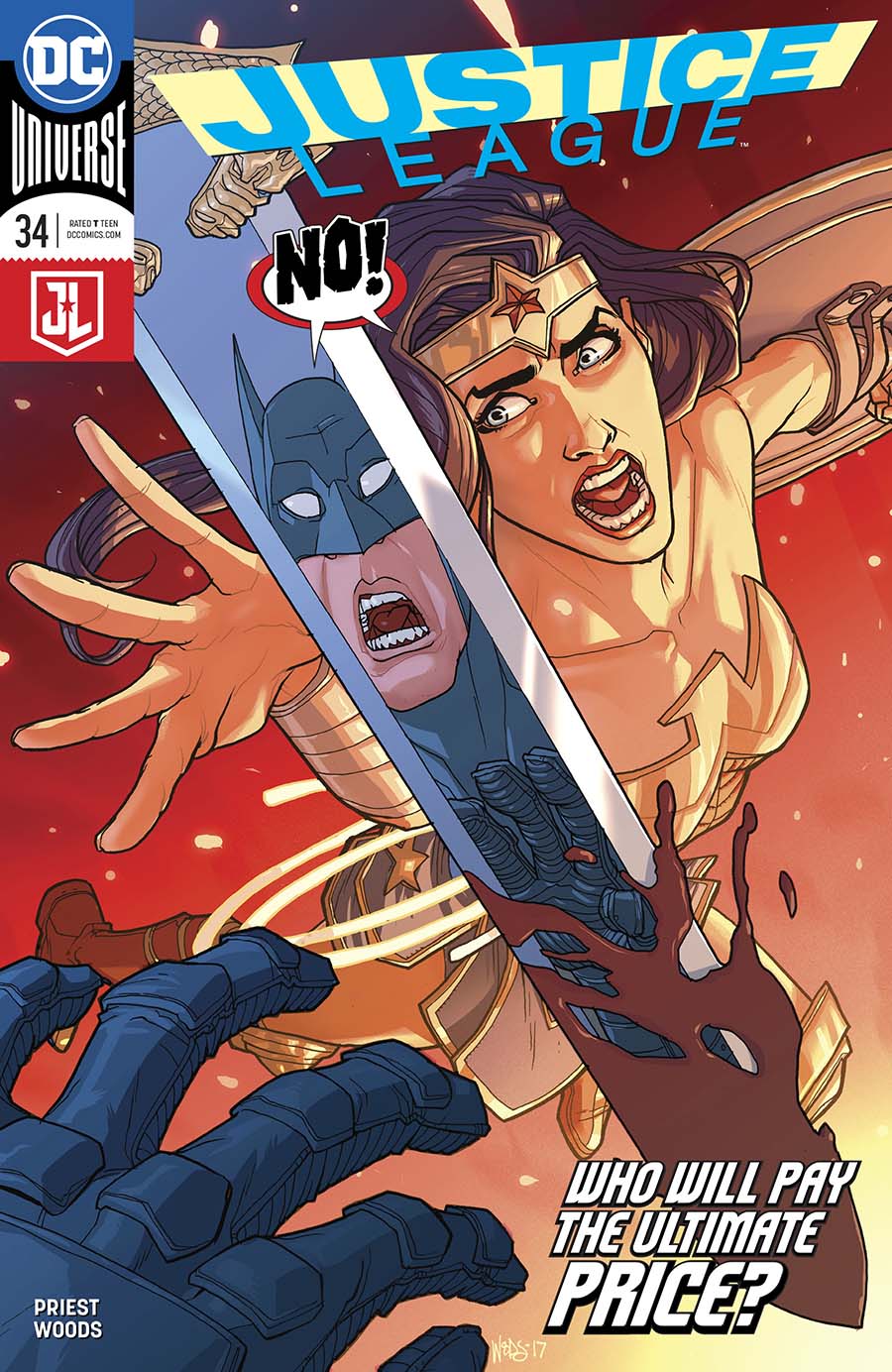 Simon Baz is up in space performing one of his 5 daily prayers required by his Muslim faith (when in space, which direction faces Mecca?), when he is alerted by a local that trouble is brewing, something big. He flies into space where he encounters a Giant Space Armada that appear to be headed straight to Earth.

Back on Earth, an extremely tired Bruce Wayne is awoken by the Justice League emergency signal. Alfred tries to convince Bruce to get some rest, Bruce replies, "Fine, I'll be right back". Bruce is met by Cyborg who says there are three separate events happening, a pair of nuns taken hostage, an Earthquake at Corona Del Mar, and the upcoming invasion that Simon has been tailing. Bruce decides the fleet can wait for a bit as they are still traveling and divides the team into two groups. Jessica Cruz, Flash, and Superman will handled the Earthquake, while Wonder Woman, Aquaman, and himself will rescue the nuns. Cyborg will remain at the base as back up.

While dealing with the Earthquake, Jessica is communicating via her ring to Baz, he tells her he has tried hailing the Armada to no avail. Simon says maybe he should give them a warning shot, Jessica disagrees and says, "Perhaps I should ask the Bat and get back to you". Meanwhile Superman is seen holding up debris allowing civilians to escape and Flash is shown running around rescuing others.

A disguised Wonder Woman is surveying the streets outside of the building where the nuns are being held captive, while a disguised Aquaman is driving a bus filled with Bruce and other civilians. Wonder Woman informs them that the FBI is about to breach the building when a little girl runs out in front of the bus forcing Aquaman to swerve and collide into another vehicle. While Aquaman and the other driver are arguing, a bright flash appears and takes Aquaman away, Cyborg tells him he needs to join the others at the Earthquake site as a dozen or so large fish have beached themselves. Batman replies, "You didn't tell me the earthquake was at a sea port", Cyborg replies, "I did tell you it was at Corona Del Mar which means Crown of the Sea". Batman tells Cyborg, "Good call, of course Aquaman should join the others, and the A team should head into space to join Baz". During this conversation the FBI breach the building with Flash Bang canisters, but one went off close to one of the nuns' oxygen tank causing an explosion killing one of the nuns. Another Earthquake hits out at sea leaving just the Flash and Aquaman to deal with the Tsunami. Superman, Cyborg and Jessica are flying into space and meet up with Simon Baz to face the third threat of the day, the space armada. As soon as our heroes arrive, the space fleet turns around and heads back out to space, turns out it was not an invasion but a "tour bus" of sorts that just made a "wrong turn".

The next day at Wayne manor Clark is talking with Bruce about the previous day. Bruce said he blew it, he was "dead on his feet" and because of this he lost a nun and nearly drowned half a million people. Clark says, "You don't have to be involved in everything. It's okay to pass the ball, we'll manage without you". Bruce replies, "Maybe you should".

Next: The Breaking of Batman continues!

Story - 4: On my first read through I will admit, I did not care for this book that much, but on my second read, once I knew where the story was going, I think it flowed better. I have heard this is common with Priest's writing. This is Priest's first opportunity with this title and while I still do not think this is the Justice League book DC needs to be giving the people after the movie to draw interest in the title, I will say it is a step up from what we were getting from previous writer Bryan Hitch. I also like the idea of an unsure Batman, and with the current events in his own title, getting engaged, I wonder if slowing down a bit is in Bruce's future.

Art - 3: I didn't care that much for the art on the title this month, It wasn't horrible, it just wasn't that great either, if I could do half a shield it would have been right dead in the center at 2 and a half shields. Sadly I see that the same artist is on board for the next issue so I can only assume we are stuck with him for this arc at least. On the plus side the writing was better and I will take writing over art any time.

Cover Art - 3: Same as above for art, it wasn't a bad cover, but it definitely did not stand out on the shelf and scream "buy me" either. Wonder Woman looked okay and the reflection of Batman's face in the sword was interesting, but why was there a sword with blood on the cover?

Variant Cover Art - 4: This is the one I decided to pick up. Nick Bradshaw and Alex Sinclair continue to do the variant covers for this title and while the scene was a very small fraction of the overall story, I really enjoyed the painted look of Flash and Aquaman.