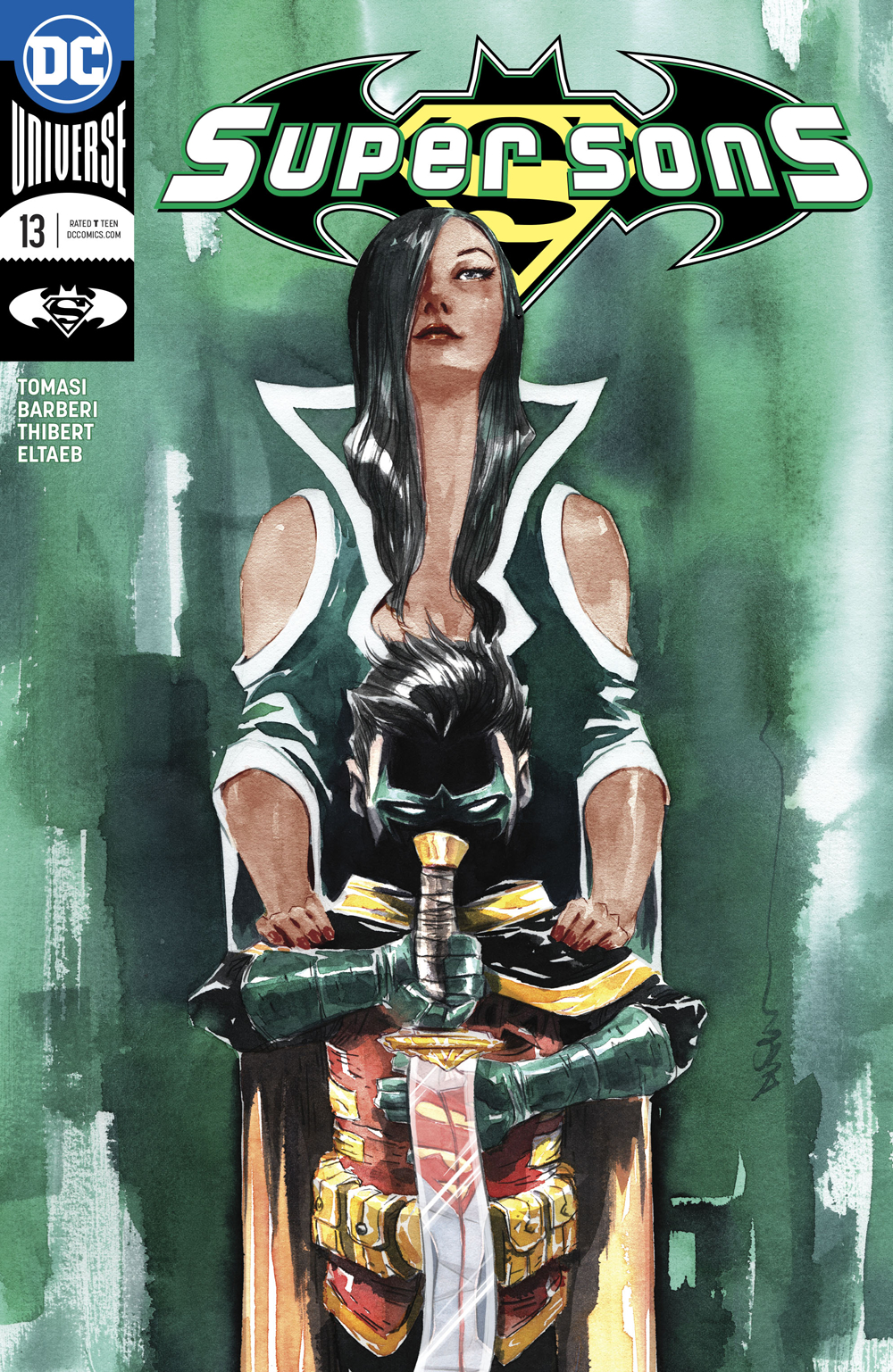 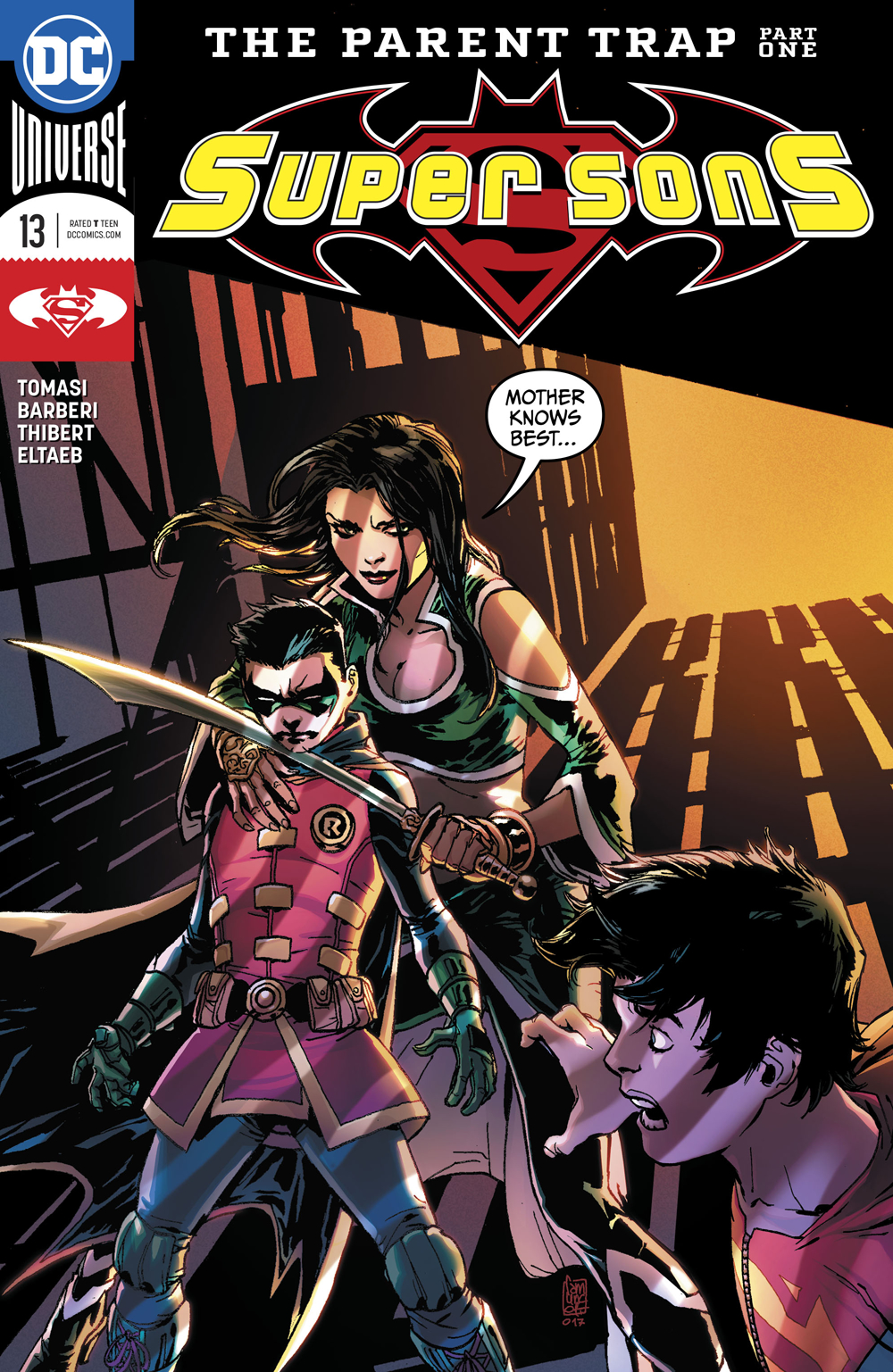 "The Parent Trap" - Part One

Reviewed by: Keith Samra
Click to enlarge
We begin at the West-Reeve Private School, where Jon is playing kick ball with his fellow students. During this physical activity, he practices very hard at playing human, disguising the fact that he's more powerful than everyone there.

Damien arrives via helicopter, and is met by Jon. In usual fashion, Damien works hard at being a jerk, both to Jon and his class mates.

At lunch, Jon invites Damien to play sport with him and the other students. Damien senses that he is not alone, and they both discover that his mother Talia Al Ghul is watching them from the shadows. Talia tells Damien to join her in her new quest as an assassin, seeing as how she helped make him into the "weapon" that he is today, Damien refuses, and Talia leaves.

After school, the boys look deeper into Talia's movements, and Damian discovers where she and her army will strike next... Gotham.

Once they get to Gotham City, the boys make short work of Talia's assassins, and Damien discovers Talia's next target... Lois Lane.

Story - 5: I tried not to let the fact that this book is being cancelled in April, cloud my judgement, or have an unfair biased toward it. But true to fashion, Tomasi rarely fails to deliver.

The charm of this issue, was Jon's innocence, naivete, enthusiasm and eagerness, for his new school, his school mates and toward his best friend Damien to join in with him and act like a normal kid.

Jon's reaction to Damien himself being an assassin, and having killed many people at the tender age of thirteen. Jon, much like his father, sees the good in people, and isn't above giving anyone the benefit of the doubt.

Damien's dark past is no secret, but it is becoming apparent to Jon and us the reader that the boy is lethal much like a dormant volcano. Damien seems to walk a fine line between light and dark, and no one writes him better than Tomasi. I've stated before, if Grant Morrison is Damien's father, then Tomasi is certainly his mother figure. As Tomasi has written Damien for a great many years, and took what Morrison created and shaped him into a more well rounder character.

I loved the West-Reeve Easter-egg. Paying homage to Adam West and Christopher Reeve. And also liked the addition of Georgia Bakshi at the boys school. Tomasi has a knack for creating interesting supporting characters, and Georgia seems very sassy, and a welcome addition to the supporting cast.

My only criticism for this issue, is at the beginning of the book, Jon is playing Kickball at recess, but Damien arrives to school after recess is finished. Small timing error, but nothing too distracting.

Looking forward to the next issue. As I stated in the beginning, this will most likely be the final story-line for the book, before its cancelled, so hoping that Tomasi goes out with a bang, and finds another project to sink his teeth into.

Art - 5: Well no Jorge Jimenez again this month, but we did get the excellent pencils of Carlo Barberi, whose style fits like a glove to the tone of this book.

Barberi has always had a Manga/Cartoonish style, which allows for more expressive visuals, very similar to Jorge's storytelling style.

I liked the heat vision shot of Jon in the dark, as he stands up for Damien against Talia, and Damien's body language emulates his fathers.

Though I really liked the art in this issue, there wasn't really anything that jumped out at me, worth mentioning. That however is not a knock at the art in anyway.

Art Thibert's a veteran inker of the industry, and he brings a sharp and crisp finish to Barberi's pencils. They are not too heavy or messy.

I missed Alex Sanchez colors, as he brings a wonderful tone to the page, Gabe Eltaeb did a good job on the colors, they may not have been as moody as Sanchez work, but they are vivid and striking.

Cover Art - 3: This cover conveys the tone of the story inside, but I am not a fan of its composition and heavy inks.

Variant Cover Art - 5: Dustin Nguyen's variant cover is far superior to the main one. I love the composition and the choice of colors. The green brings a certain call back to a Demons head.