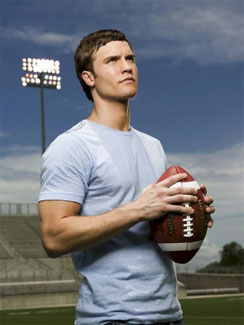 CinemaBlend.com, AICN and IESB.net are all reporting that the cast for "Justice League" is set to be announced this week, with sources leaking certain roles to the sites.

Warner Brothers is set to announce the completed JLA cast next week, and Scott Porter (that's him to your right) has been hired to play Superman. If you've noticed Porter at all before now, it's probably as a regular on the TV series Friday Night Lights. He also had a fairly significant part in Music & Lyrics, and he's just finished filming on Speed Racer as the brother of Racer X, Rex Racer.

He's 29, from Omaha Nebraska, and about as all-American looking as a guy can get. I guess that's what you want in a Superman, isn't it? Now can the guy act? Wait, this is JLA. Who cares. Can the guy convincingly carry the Statue of Liberty over his head? That's all that matters.

In addition to Porter, our source says Common is now signed to play John Stewart/Green Lantern. Adam Brody has been added to the cast, probably as The Flash. Teresa Palmer is on board but not as Wonder Woman. Other sources suggest she's playing the daughter of Batman villain Ra's al Ghul, Talia Ghul. Last, Michael Gough may make an appearance as Alfred, after being kicked out of the part by Michael Caine in Chris Nolan's Begins movie.

We look forward to the official announcement from Warner Bros., if it is indeed scheduled to be released this week.