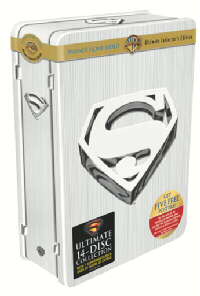 A quick reminder that the "Superman Ultimate Collector's Edition" DVD box set is once again available to buy.

When Warner Home Video's (WHV) The Superman Ultimate Collector's Edition (Superman UCE) was released last November, consumer receptivity was completely unprecedented, resulting in WHV selling its total supply of collections in one month. The Superman UCE was lauded by the nation's critics and made many top ten lists, year-end round-ups and magazine gift guide suggestions. The title also won top honors as Catalog DVD of the Year at the Digital Entertainment Group's Creative Excellence Awards.

As of yesterday the Superman Ultimate Collector's Edition is now available by popular demand, in a limited edition, at US$99.92 SRP.

The re-released Superman UCE includes the corrected discs for Superman III and Superman: The Movie, which were missing bonus content upon their release last fall. When the inadvertent omission was discovered, replacement discs were made available to initial UCE buyers. Replacement discs from the first release of the UCE can still be obtained, at no cost to the consumer, by calling 800-553-6937.

The 14-disc set is packaged in a collectible keepsake tin and holds the set within lenticular packaging, along with a reproduction of the comic book Superman issue #7 and a Superman overview booklet. Consumers can also send in a mail-in offer for five limited edition Superman theatrical movie posters through March 2008.

The tin box is exactly the same as the November 2006 release, however the new edition (with corrected discs inside) can easily be identified by the two new stickers on the outside of the tin.