You'll recall that on December 5 we reported on a "Batman vs Superman" billboard appearing in the movie "I Am Legend". We now have an image of the billboard from the movie. 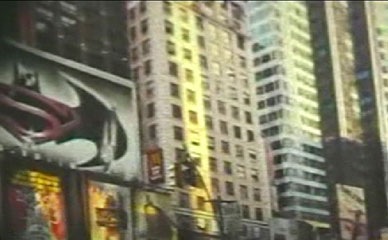 Here's the original news report we posted on December 5th:

In a tongue-in-cheek nod to his failed attempt at a "Batman vs Superman" movie pitch, Akiva Goldman has thrown in a movie poster billboard for a Superman/Batman film in the Will Smith movie "I Am Legend".

In "Legend," Will Smith's character is one of the few humans left alive in 2012, following a massive 2009 virus attack. As he wanders the abandoned, filth-ridden streets of Manhattan, the world is frozen in time from the moment that the rabies-like disease hit. When "Legend" hits theaters December 14th, eagle-eyed viewers will be able to spot all sorts of futuristic billboards, including one that features the iconic symbols of Batman and Superman.

Unfortunately, fans interpreting the billboard as a sign that Supes and the Dark Knight will soon square off are setting themselves up for disappointment. "No, no, no," laughed Lawrence, when asked if the billboard was his way of announcing his next project. "That's not me."

Read the full report at MTV.com.