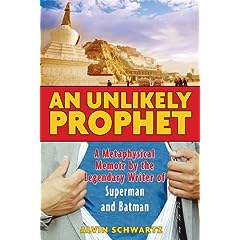 Variety reports that the producing team behind offbeat indie documentary "What the Bleep Do We Know?" has bought feature rights to the novelized memoirs of Alvin Schwartz, centered on his 15-year stint as author of the Superman comic strip.

Global Intelligence Press has optioned "An Unlikely Prophet" and its sequel, "A Gathering of Selves," with Betsy Chasse developing, producing and directing the project. Kate Montana will also produce.

Schwartz began writing Batman and Superman stories during WWII, working for DC Comics until 1958. He also wrote the beat novel "Blowtop" in 1948 and, nearly 50 years later, published "An Unlikely Prophet," in which he details the transformation of Superman into a more complex character.

"There was the fact that Superman was unlike any other superhero, because he wasn't human to start with," Schwartz said. "He had to learn his humanity. He had to adapt himself to ways of doing and being of a different planet, a different society and a different value system."