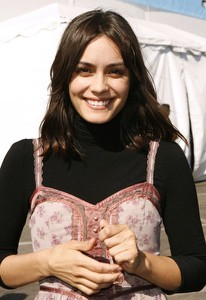 Cinematical.com reports that Shannyn Sossamon (A Knight's Tale, One Missed Call) auditioned for the role of Wonder Woman in the up-coming "Justice League" movie...

Sossamon did audition for Princess Di and she apparently blew away the writing team of Kieran and Michele Mulroney and has heard back from them since. According to our source, the Mulroneys were so taken with Sossamon that they championed her to director Miller, even going so far as to state that they had envisioned Sossamon in the Amazonian role all along. But now comes the bad news ... our source also tells us that Miller was less than over the moon about Sossamon's audition (or just didn't see her as being the right casting fit), which means that a resulting stalemate will almost certainly break in his favor. The audition apparently took place sometime prior to the recent 'Young Hollywood' open casting call, and that's all we know at this point.

Meanhile, AintItCool.com reports that the 'Young Hollywood" auditions mentioned above (and reported on here last week) were supposedly only for the roles of The Flash and Wonder Woman...

This source said that all those people above (and many more) were only reading for two characters: The Flash and Wonder Woman. The source assured me that the casting is skewing very young only for The Flash because he's the youngest member of the Justice League. And Wonder Woman is a goddess that doesn't age, so it's understandable she'd be cast young.

I personally don't think Wonder Woman should be cast any younger than her early to mid-twenties, but I can see where they're going with making the Flash young and brash... if these rumors are in fact true.