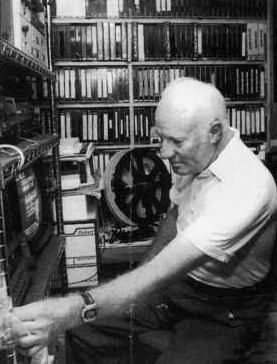 Whoever called James Brown "The Hardest Working Man In Show Business" probably never met Fred Shay. Mr. Shay has done so much to preserve old radio shows, films, movie serials and television shows. His collection is so large that the National Broadcasters Hall of Fame has made it part of their archive, in which he's the curator. Mr. Shay also wrote the radio log for the The Adventures of Superman radio show. This led to a friendship with Kirk Alyn, the silver screen's first live action Superman. Alyn was inducted into the National Broadasters Hall of Fame thanks to Mr. Shay's efforts.

On Wednesday, August 22, 2007, I had the pleasure of speaking with Fred Shay about Kirk Alyn, Superman and the preservation of Hollywood's Golden Age. Here is some of what was said...

First of all, Could you tell us a little about yourself?

Well, I hadn't heard an old time radio show in over 25 years until one night my wife turned on the portable radio in 1976. The station was playing an episode of The Lone Ranger. I thought to myself, "If these radio stations can get copies of these old shows, maybe I can get some of them myself." I contacted somebody, and over time I had enough radio shows to be able to trade with other people. In 1977, I was invited to the first induction ceremonies for the National Broadcasters Hall of Fame. After seeing how many radio shows, serials, etc, that I had. the NBHF made me the curator of their archive.

In 1979, a friend of mine told me that DC Comics had X amount of Superman radio shows. I contacted them. They had 900 discs with around 1,200 of the 15 minute serials, and I had found 18 and a half of the 30 minute shows. That led to talking with Kirk Alyn.

Click here to read the complete interview with Fred Shay.