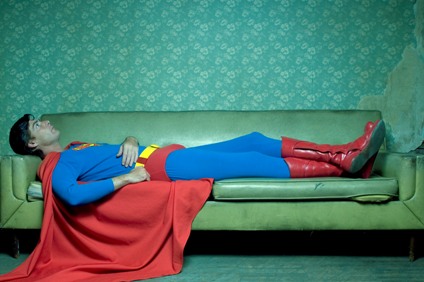 Most days, and especially on the weekends, you can find Christopher Dennis outside of Grauman's Chinese Theater on Hollywood Boulevard in scenic downtown Hollywood, California. He and others, most notably his friend Joe McQueen (who plays the Hulk) greet tourists and passers-by, posing for photos and delighting children whose eyes light up at seeing their favorite comic book heroes brought to life.

Christopher Dennis is the star of the new documentary feature, "Confessions of a Superhero". I'd actually talked to our benevolent Editor-in-chief, Steve Younis, about interviewing Mr. Dennis before I was even aware of the film. I think he's got a fascinating story to tell, and it's my pleasure to be able to bring it to Superman fans around the world.

To Christopher Dennis, what he does is more than just take pictures with people, hoping to get a nice tip. He's every bit in character, and he knows his Superman mythology perhaps as well as anyone. During our interview, some folks stopped by and asked if he'd be willing to pose for a photo with their son, and not only was he willing but he was thrilled. He picked the tyke up and smiled for the camera, and upon handing the boy back to his parents, advised him to stay in school and eat his vegetables, because that's what Superman would do.

Mr. Dennis, as close a duplicate to Christopher Reeve as you'll ever find, was gracious enough to sit down with me at Wizard World Los Angeles for an interview, and later invited me into his home to see his most impressive Superman collection. When he talks about Superman there's an excitement in his voice and a sparkle in his eye, and you know he's speaking from the heart.

Click here to read the complete interview with Christopher Dennis, which includes an extensive photo gallery of over 100 images.