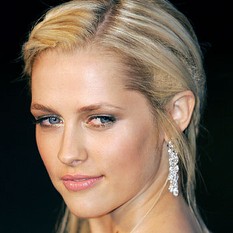 The Daily Telegraph reports today that Australian actress Teresa Palmer may have landed the role of Wonder Woman in the up-coming "Justice League" movie...

In the eyes of many male fans she is already pretty super, but Aussie actress Teresa Palmer may have just pumped up her powers after reportedly landing the part of Wonder Woman in the upcoming Justice League of America film.

As word filtered through Hollywood that Jessica Biel had passed on the tights-tastic role, yesterday Confidential received word from Teresa's friend that the blonde bombshell, now based in LA, had lassoed herself the part.

"Teresa rang me all excited to tell me at 2 am this morning," Palmer's pal said.

"Apparently they're going to have her fitted out with a black wig rather than dye her hair."

The 21 year old star has starred in films such as "December Boys" and "The Grudge 2". It should be noted that Teresa's Sydney based management said the casting was not confirmed.