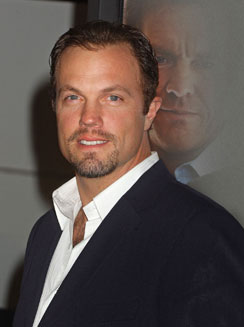 Adam Baldwin, who voices Superman/Clark Kent in the up-coming direct-to-DVD animated movie "Superman: Doomsday", spoke with Newsarama.com about the role, his voice acting work and more. Here's an excerpt from the interview...

Q: Was there any version of Superman on film or TV (animated or live action) that you enjoyed? Are you applying any of that to your work on Doomsday?

AB: I remember watching George Reeves as Superman when I was a kid, and I thought that was cool. I'm not really a purist in the comic book sense of Superman, so the George Reeves version was pretty much my introduction to the character. And, of course, later seeing Christopher Reeve brilliantly portray Superman on film was a revelation. But that was the depth of my knowledge going into Superman: Doomsday. Still, those didn't influence my performance - mainly because this is a much different Superman than most people have seen. It's darker, and it explores far more adult aspects of the character. This story doesn't have that fly-in-and-save-the-day tone, so it didn't really allow me to go to some of the acting styles of those two actors, particularly their comedic sides.

Q: In your mind, what is so special about playing Superman?

AB: He's an American icon - what's not to like about playing him? Plus I get to play several versions of Superman - normal, dark and, of course, mild-mannered Clark Kent. Often I have been known to play the heavy, the bad guy. It might be because I'm tall and strong. But to play the ultimate superhero is quite a little turn of events for me, and I embrace that. It's an honor.

Read the complete interview at Newsarama.com.