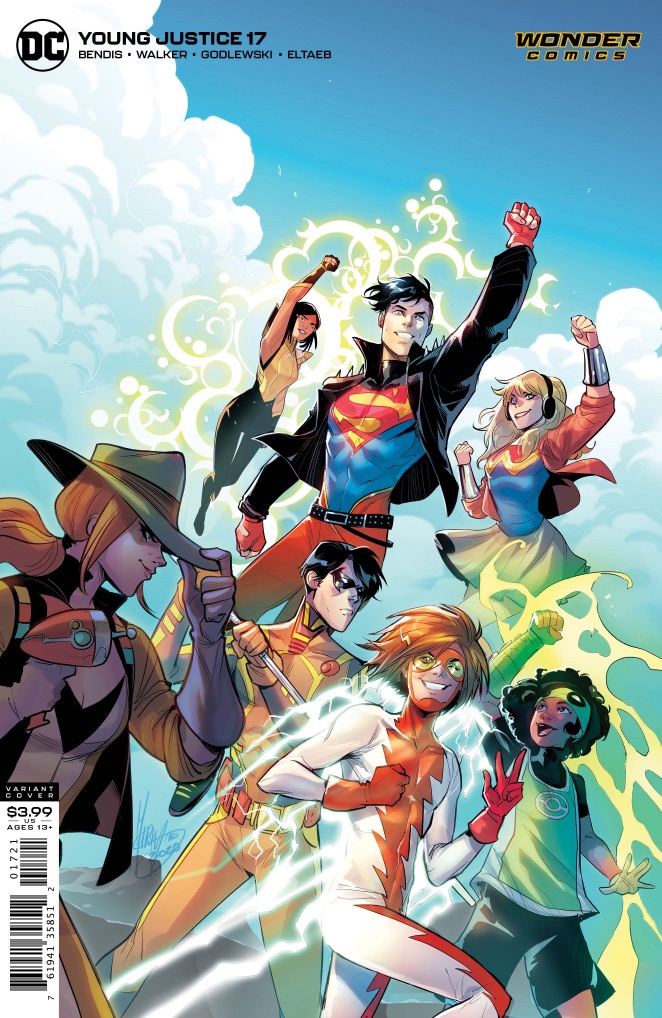 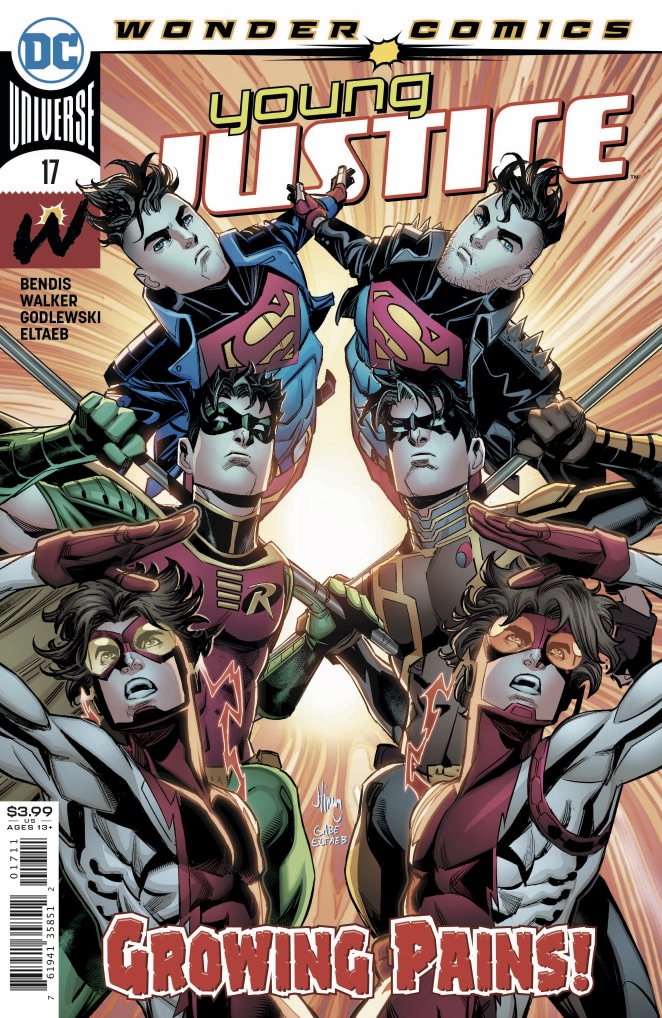 Reviewed by: Tony Parker
Click to enlarge
Following the events of "Action Comics: Metropolis Doom", Young Justice (Connor Kent/Superboy, Tim Drake/Drake, Cassie Sandsmark/Wonder Girl, Bart Allen/Impulse, Jinny Hex, Keli Quintela/Teen Lantern, and Naomi) help clean up Metropolis alongside the Justice League. During the cleanup, Cassie and Wonder Woman have a heart to heart, Connor and Superman agree to go find out more about Connor at the Fortress of Solitude, Bart and The Flash also have a heart to heart about living in the now, and a young girl named Yolanda, who comes to provide food and drinks to Young Justice, starts her internship at the Hall of Justice.

Story - 1: And just when the book seemed to be improving with the last issue, in comes a filler story that is so uniquely Brian Michael Bendis I could have guessed it from the first page.

Unnecessary characters who seem to act as props and plot devices rather than actual characters? Check.

Meandering conversations that take what could be said in a few words into whole pages of schlock? Check.

"Jokes"? Super check! (Seriously, it seems like all the jokes in this book are "Duh, we don't get what the situation is" and "Wanna join Young Justice?". The fact that Bendis is making fun of his mistakes without fixing them is infuriating).

But of course it wouldn't be an issue of Young Justice written by Brian Michael Bendis without his favorite writing tool as of late: Characters telling other characters things we already know!

After half an issue of... I think it was a collection of jokes and pointless focus on Yolanda, I have been actively wiping my brain from this inane madness... We have four conversations that provide us with zero new information.

Cassie and Wonder Woman talk about how Zeus talked to Cassie all the way back in a previous issue, something that has had zero effect on Cassie since (in all honesty she hasn't had anything to do since then too, which says a lot about the writing at play when arguably the fourth most important character is that disposable), and all it accomplishes is informing Wonder Woman of this (something that won't change anything) and having Cassie be told by Wonder Woman she should lead Young Justice (which considering Cassie's relevance to Bendis, it would be more likely that Yolanda, Dan Didio and Garfield would lead Young Justice than her).

Then Tim and Connor reiterate that Connor is going to the Fortress of Solitude to learn more about himself with Clark (which even if you haven't been reading Action Comics could be explained in one bubble and not another whole page or two), before Connor yet again angsts over being forgotten as if this is new information (granted, the moment between Connor and Bart is sweet, again reinforcing they're the only aspect of this book that works).

And after Tim and Batman have a conversation so earth shatteringly important that it carries less than zero significance for the rest of the issue (I am impressed that Bendis has translated Mr. Freeze's below zero weaponry into a ray of decreasing plot device relevance), Bart and The Flash talk about how Bart is worried over how they were forgotten (take a shot, or not, you might hurt yourself), Barry speaks the only intelligent thing in the whole issue: That Bart should probably focus more on the now, and on his new friends, rather than chase a mystery that is clearly hurting him. And he is right, even if it's laughable that Teen Lantern, Jinny Hex, and Naomi are considered Bart's great friends when they have no clear dynamic with him. That and Naomi then immediately leaves. Also, WHERE is Amethyst? A core founder is actively missing with NO explanation, and no one bats an eye.

Finally, Connor and Clark leave (and not before reiterating what they are doing to the clear dumb dumbs in the audience), Tim gives Yolanda a pep talk because her standing around awkwardly with a few bottles of water means she is now a proud member of Young Justice or something, and we see that the twist of this story is that she is gonna be an intern at the Hall of Justice. I am so confused by her inclusion that I could have written the entire review about her, to be honest.

I... I have no words. I just don't understand how Bendis is writing so many titles. I just don't understand how this book is still running. If they don't get a new writer and fast, all these characters will fall by the wayside for another few years. And instead of going around in circles, they'll just sit there until someone who actually cares more about the readers than a quick buck takes over this book. Because the way this is going, Bendis is making the now insufferable and pointless.

Art - 3: Once more, the art is passable with no real standouts. Even Impulse, who usually provides this book with standout panels, provides an average depiction of the speed force. I have nothing against the art, mind you, but I do wish it would do more than just be serviceable.

Cover Art - 2: Nothing to write home about. A strong 2 because the use of doubles is nice, but not a weak 3 because Tim's inclusion on the cover as if he relates to this issue's main "theme" is laughable at best.

Variant Cover Art - 3: Having stated that Bixie Matheiu's covers have been really poor two times, I am more than happy to declare that this is a good variant cover! Nice look, nice feel, it even sells on the idea that this is just the team having a good time! Well done!